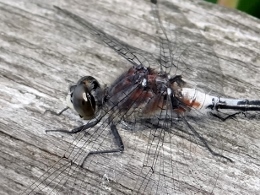 Summer’s a great time to see a variety of wildlife. Although the birding is usually slow up until about mid-August, there are lots of other creatures around to make any outing enjoyable. I’ve had some good luck at Sarsaparilla Trail over the years, encountering a variety of mammals, reptiles, amphibians, birds and bugs. It’s a small trail, but the grassy clearing near the trail entrance, the mixture of deciduous and coniferous woods, and the large pond provide a number of interesting habitats where just about anything can be found.

I usually visit Sarsaparilla Trail on my way to and from other trails, especially during migration. In the summer I spend more time at the pond watching the dragonflies and the water birds from the platform at the end of the boardwalk. On one recent outing I found a chipmunk sitting at the top of a small shrub, nibbling on something. Although I know they are agile climbers, it still surprises me to see them in trees, shrubs, and even the side of the neighbour’s house! 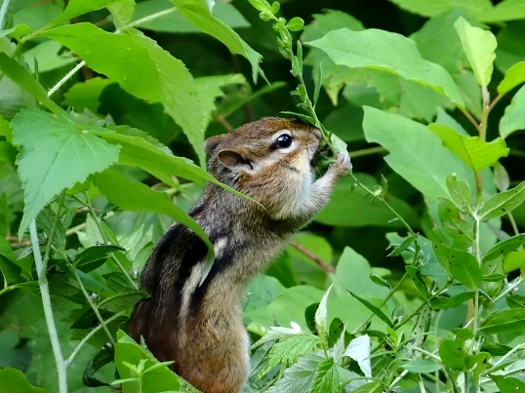 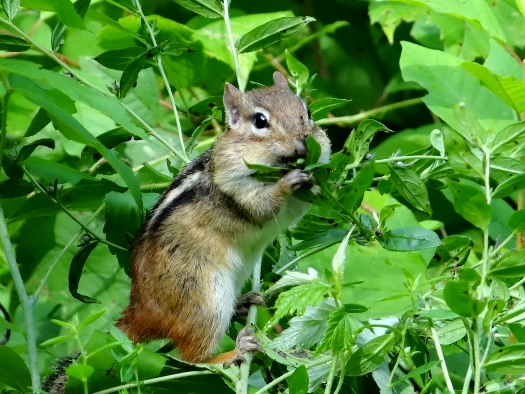 At the pond I’ve seen a Green Heron hunting from a fallen tree on the northern edge of the pond, and three Belted Kingfishers flying back and forth from tree to tree. On another occasion I watched a family of Pied-billed Grebes, including four young birds with striped faces, dive for food in the middle of the pond. I haven’t seen them often this summer, so it was nice to see that they have had a successful breeding season. On Saturday I saw a Yellow Warbler fly across the pond; this is the first time I’ve recorded this species here.

There weren’t as many odonates at the boardwalk as I had seen earlier in the summer, though a good number of species were still present at the end of July. A few Twelve-spotted Skimmers, several Widow Skimmers, an Eastern Pondhawk, a Common Green Darner, one unknown spreadwing, a single bluet, a couple of meadowhawks, and a couple of Belted Whitefaces sitting were all present during the final two weekends of July. 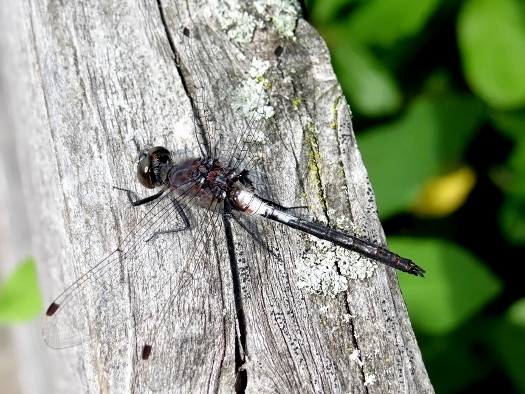 While photographing the Belted Whitefaces I noticed another predatory insect, a Robber Fly, perched on another railing. 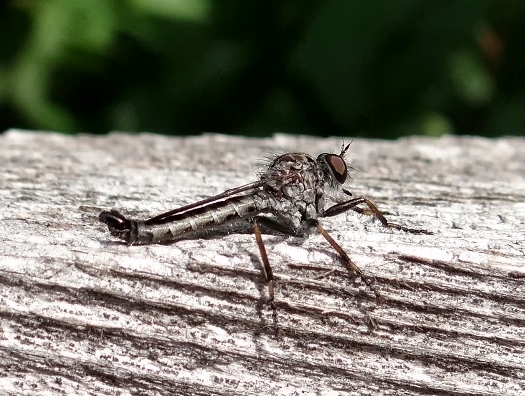 Turtles are usually plentiful on the logs around the edges of the pond. A couple of times I’ve seen a Painted Turtle basking on the logs close to the observation platform. 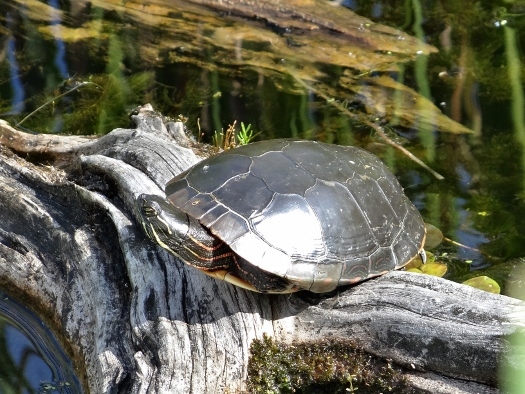 It took me a while to realize that the turtles weren’t alone, and that a Northern Water Snake was basking on another log close by! 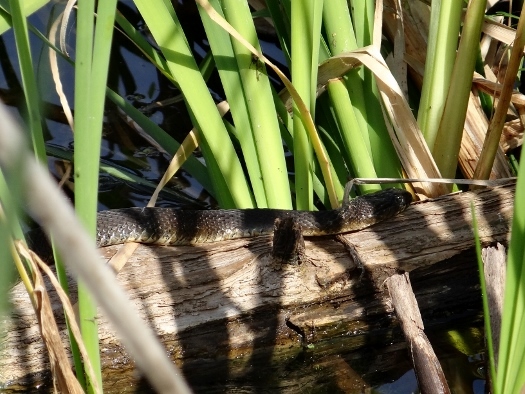 On my way back to the car I noticed a large dragonfly zip by me and land on a tree trunk. It was a mosaic darner, but I couldn’t tell which one; I caught it and identified it as a Canada Darner. 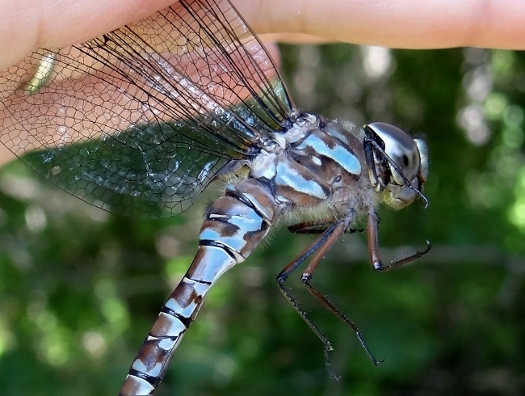 I stopped by the Beaver Trail after that to check out the ponds, but very little was flying. I had better luck in the wildflower meadow where I caught this Lance-tipped Darner. You can see the difference in the shape of the thoracic stripes in these photos. The Lance-tipped Darner has a stripe with a faint indent, while the Canada Darner has a stripe with a large notch in it. The Canada Darner also often has a small coloured dot between the two thoracic stripes. 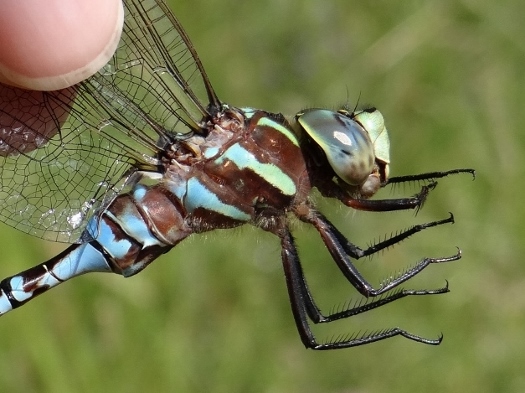 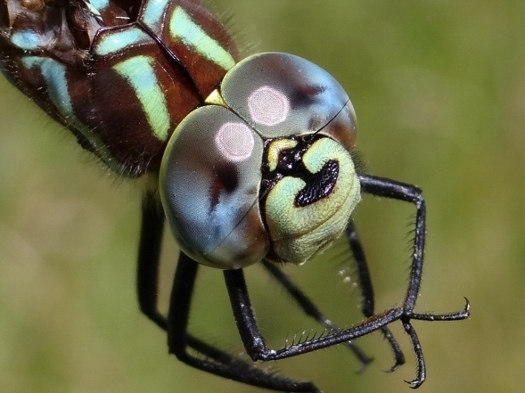 On July 22nd I visited Hurdman and found a new species for my local odonate list, a Black-shouldered Spinyleg resting on a concrete barrier at the water’s edge. This was the first clubtail I’ve seen at Hurdman, and it surprised me because I’d only seen this species along the Ottawa River. 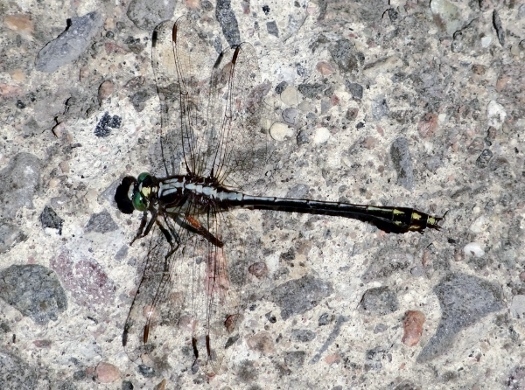 I was off work on July 26th and bought myself a small magnifying lens for examining dragonflies. A hand lens is essential for identifying some species, and I figured it was time I learned to ID bluets, spreadwings, meadowhawks, etc. I went to Mud Lake afterward and didn’t need the lens to identify this large Swift River Cruiser hanging from a shrub. It had been flying over the open field near Rowatt Street with a couple of Common Green Darners, and when it landed I tracked it down. 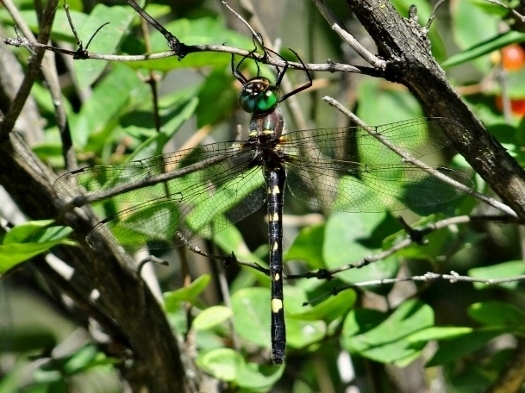 A close-up of her face: 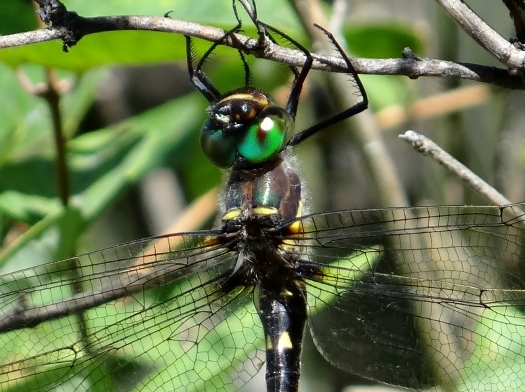 I returned to the same area at the edge of the lawn where Chris and I had spent much of the OFNC dragonfly outing earlier in the week to look for bluets. I caught a few and spent some time learning how to ID them. To ID these fellows you need to look at the shape of the claspers at the end of the abdomen; they are so small they are impossible to see in the field, and even photographing these tiny structures is difficult. The hand lens really helps to get a good, clear look at them. 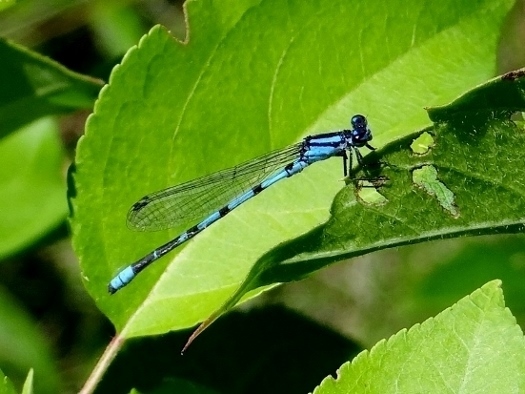 It’s been a fabulous week for bugs and other wildlife…but I can’t believe how fast this summer is going!