After leaving Cape Breton Doran and I spent the rest of our vacation in Greenwood. We stayed with Doran’s foster mother, Iris, just outside of town on the South Mountain; though at 275 metres in height, the “mountain” is the same height as the Eardley Escarpment in Gatineau. This granite ridge forms the southern edge of the Annapolis Valley and protects it from severe weather blowing in from the Atlantic Ocean. There are plenty of fields and small woodlots along the roadways on top of the mountain, and small lakes and larger swathes of mixed forest beyond the main roads. Iris’s property consisted of a large yard with a small woodlot containing a swampy area at the back; if that wasn’t enough for me, there was a dirt road close by which was wooded on one side and had a dense scrubby meadow on the other. All of this made for some excellent habitat to look for wildlife.

I got into the habit of waking up early and going for a walk along the dirt road before anyone else was up. On my first morning there I left the house at 7:45 and spent almost an hour walking. The day was warm but overcast; I saw a few butterflies (to follow in a separate post) and about 15 birds species, including six warblers: three Ovenbirds, two Common Yellowthroats, two Northern Parulas, three Chestnut-sided Warblers (a new species for my Nova Scotia life list), a Yellow-rumped Warbler, and a Black-and-white Warbler. The Yellow-rumped Warbler and Black-and-white Warbler were responsive to pishing; although the Yellow-rump stayed too high up in the trees to photograph, the Black-and-white Warbler was much more cooperative, popping right out in front of me.

The Black-and-white Warbler was another new bird for my Nova Scotia life list. The amount of black on the face indicates that this is a male. Although these woodland birds are most often seen creeping along tree trunks and branches like a nuthatch, they build their tiny cup-shaped nests in the leaf litter on the ground. 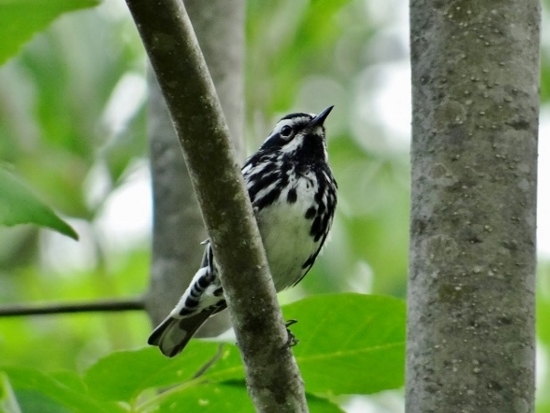 I also heard a Pileated Woodpecker, a couple of White-throated Sparrows, a Veery, and a distant Alder Flycatcher (which was also new for my Nova Scotia life list). I was hoping to see some dragonflies on this trip, and was happy when I saw one zip past me on the road. It landed on the ground, then on a leaf where I was able to identify it as a Hudsonian Whiteface – a species I don’t see very often in Ottawa.

I had even better luck the following day when I heard a Hermit Thrush singing in the woods and added two more warblers to the list. The Black-throated Green Warbler was not a new Nova Scotia bird for me, but this Northern Waterthrush was! I heard something chipping in the tangle of vegetation above the watery ditch and stopped to see if I could pish it out. Two White-throated Sparrows immediately responded by flying out into the open, as did a Common Yellowthroat and this waterthrush! It was neat to see how dainty and small the Common Yellowthroat looked compared to this large, chunky warbler. There were at least two in the vicinity as I heard a second one singing deeper in the woods. 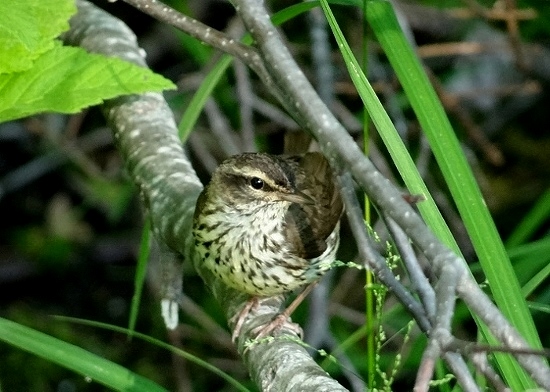 A couple of Dark-eyed Juncos, an Eastern Wood-Pewee, a single Blue-headed Vireo, and a half-dozen singing Red-eyed Vireos kept me entertained on my walk. Also present were two Black-and-white Warblers, a Chestnut-sided Warbler, three Veeries, and a Yellow-rumped Warbler in the same group of trees where I’d seen one the day before. I didn’t encounter any interesting butterflies or dragonflies (it was probably too early in the morning), but I did find this familiar beetle in the vegetation alongside the road. 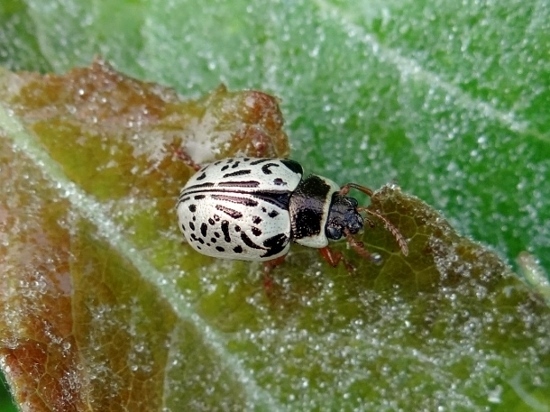 I followed a side trail toward Zeke Lake, where I heard an Ovenbird and a Hermit Thrush singing. I saw movement in the trees to my left, started pishing, and saw this baby Ovenbird fly up onto a branch. It froze when it saw me watching it, and although stayed put for at least two minutes I had no idea what it was at the time and had to ask for help identifying it once I got home. 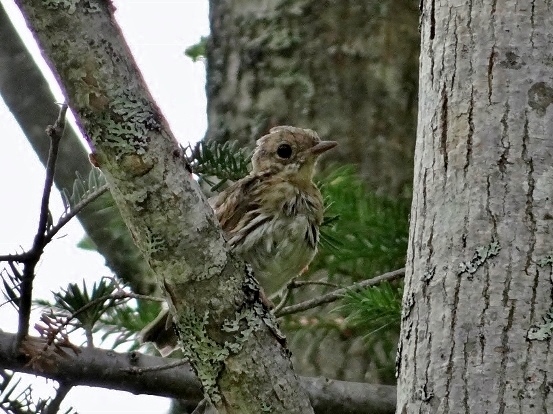 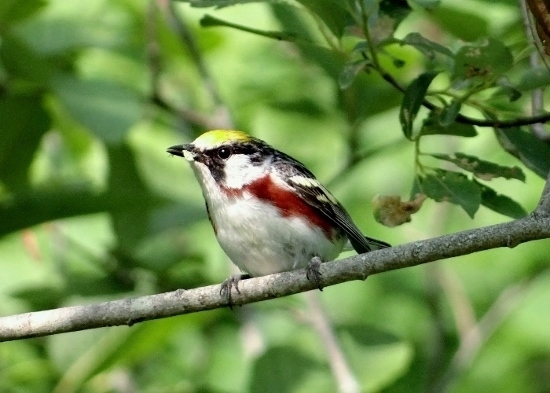 Later that day Doran and I stopped at the McMaster Mill historic site at RockNotch Falls after doing a few errands in town. The Fales River tumbles over a series of rapids and falls south of Greenwood, and I had noticed on our previous visit that it looked like a good spot for clubtails and other dragonflies. A brand-new trail clings to the side of the cliff above the gorge until it meets the top of the falls. We wandered along the edge of the river for as long as we could, checking the area for odes, before having to turn around to get back to the parking area. We didn’t spot a single dragonfly, which was a bit of a disappointment, but the falls were beautiful. (All of the below photos can be enlarged by clicking on them; the resolution is much better at full size.) 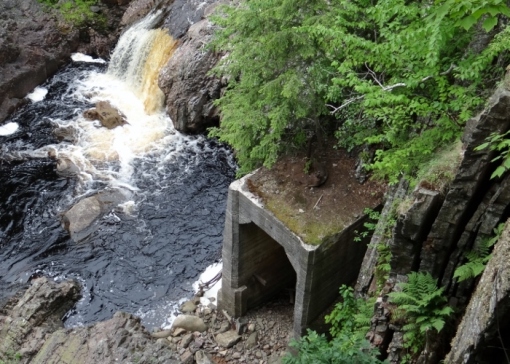 Looking down at the Old Mill site

The top of the falls

The following day I got up early for my usual morning walk, determined to make it all the way to Zeke Lake. In the vegetation along the trail I saw a couple of Eastern Forktails and Sedge Sprites. 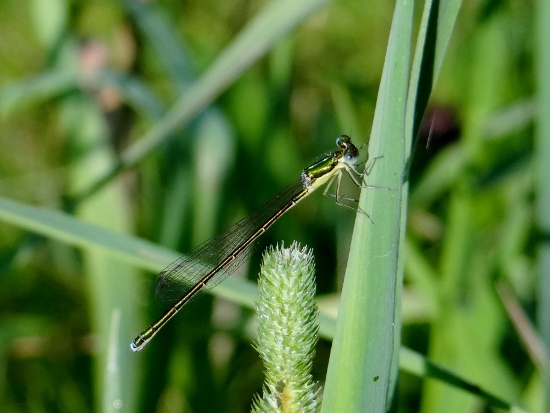 I also managed to see a Northern Parula, a Hermit Thrush, and an adult Ovenbird along the trail.

Once I got to Zeke Lake I was disappointed when I saw that the road ended in a small clearing with a hunting cabin (there was no door, and the windows had no glass in them) set right on the shore of the lake with thick vegetation surrounding it. There was no shoreline to walk along whatsoever, no place to search for odes or marsh birds – though I did see a couple of Chalk-fronted Corporals in the clearing and hear a couple of Swamp Sparrows and Red-winged Blackbirds in the marsh. I also saw a couple of mallards far out on the water and a Swamp Spreadwing (a male, fortunately – my first spreadwing of Nova Scotia) along the trail back to the road. The day was starting to cloud over, which probably accounted for the lack of odes in the area.

This pretty Willow Leaf Beetle was the only interesting bug worth photographing. Although quite small, I think they are such a pretty shade of blue.

As I was returning to the house, I was startled to see a large dragonfly patrolling along the hedge that marks the property line. I watched it long enough to ascertain it was an emerald of some sort with bright green eyes, then went to the car to grab my net. Unfortunately I lost sight of the dragonfly when it zipped off in an entirely different direction; this was the only emerald of my trip and would have to remain unidentified. I walked around the edge of the property to see if I could relocate it, but found something almost as interesting – a Phantom Crane Fly hanging from a leaf inside the hedge.

We had a much more interesting visitor later that day. I was sitting inside the house while watching the birds at the feeder (mostly Song Sparrows, Red-winged Blackbirds, Downy Woodpeckers, Blue Jays and American Goldfinches) when a streaky bird landed in the evergreen just beyond the deck. I thought it was a Song Sparrow at first, but when I took a look through the binoculars I was surprised to see it was a Northern Waterthrush! This pretty little warbler is not a common backyard bird, although the small woodlot at the back of Iris’s property has a small, well-vegetated swampy area which might attract a waterthrush or two.

The bird sat in the conifer for at least five minutes, constantly bobbing its tail while gleaning bugs from the evergreen’s needles and ignoring the bustle at the bird feeder only a few feet away. I cracked open the screen door just wide enough to take a few pictures; I was really thrilled with the sighting as I find these birds difficult to photograph due to their habits of foraging in dense, shady, wooded areas. Although I saw and heard many other neat birds on Iris’s property – including an Ovenbird, a Chestnut-sided Warbler, a Ring-necked Pheasant which called frequently from the neighbouring property but refused to show itself, a Purple Finch, a Ruby-throated Hummingbird, and a mother Mallard leading eight tiny ducklings to water – the waterthrush was the best bird hands-down.

I am grateful we are able to stay with Iris on her amazing property when we visit; it is fantastic to be able to relax in a “natural oasis” in between visiting friends and family. So thank you, Iris, for putting up with us for the week and sharing your home!

2 thoughts on “Birds and Bugs in Nova Scotia”