Today I left at 9:00 am – much later than I usually go out when I’m birding – to go dragon-hunting at Marlborough Forest. I had really enjoyed my outing there two weeks ago and wanted to see the Aurora Damsels and Brush-tipped Emeralds again. And while I didn’t think I would see the Twin-spotted Spiketail again, I wanted to go back to the bridge to look for Ebony Jewelwings.

When I arrived I checked the vegetation at the edge of the parking lot and found lots of Sedge Sprites, Chalk-fronted Corporals, three White Admirals and a couple of Northern Crescents, but no Aurora Damsels. This was likely because I had arrived earlier in the day than my last visit, and the western edge of the parking lot was still in shade.

I finally found one in the sunny vegetation along the trail just beyond the parking area, his handsome blue and yellow colouring identifying him as a male.

I heard a Black-throated Green Warbler, Ovenbird and Great Crested Flycatcher as I made my way to the first clearing where I spent some time looking for Silvery Checkerspots (more on that in my next post, where I will discuss the butterflies that I saw). I heard a Black-and-white Warbler, two White-throated Sparrows and a Nashville Warbler singing among the cedars and saw a Northern Flicker when it flew up from the ground in front of me. The deer flies weren’t bad at first, though I had quite a few swarming me before I got to the pond; I saw my first interesting emerald when it flew in close to snap at one of the deer flies, but couldn’t catch it as it was too close to me. I spotted another one on the side trail that leads to the junk yard, as well as the usual Racket-tailed Emeralds, several Chalk-fronted Corporals, and a few whitefaces.

I didn’t spend any time in the junkyard as the recent rains had flooded both the clearing and the trail. Instead I continued toward the pond where I heard a large number of Mink Frogs calling, sounding like toy hammers tapping away. I wasn’t able to spot a single one.

Both Frosted and Dot-tailed Whitefaces were lurking in the vegetation near the pond, and I saw what looked like a Belted Whiteface. A Horned Clubtail flew by, and when he landed on a milkweed leaf I caught him.

Horned Clubtails are fairly large and are recognizable by the orange spots along the sides of the final few segments of the abdomen, the pattern of yellow on top of the final segments, and the large, notched yellow shield (called an occiput) between its bluish-gray eyes. You can also see one of the two black horns that gives this species its name just in front of the occiput. The Horned Clubtail, which prefers ponds to fast-moving rivers and streams, is eating a deer fly that had been crawling on my sleeve. Dragonflies eat the entire body of their chose prey except for the wings, which you can see here.

I crossed the footbridge and was disappointed to see that there were no snakes or Mink Frogs basking in the pool of water below the dam. A few tadpoles were still around….I am not sure which species they are, though Mink Frog or Leopard Frog seem most likely given how often I see both species here. If anyone knows of a good tadpole identification website, I’d love to hear about it! [Author’s Note: In response to my request I received a link to Trent University’s page on Ontario tadpoles, although it doesn’t include Mink Frog or Pickerel Frog].

The area beyond the footbridge was extremely buggy…not only did I find myself enveloped by a cloud of deer flies, there was a large number of emeralds patrolling the sky above the grass. I spotted my first Prince Baskettail soaring too far above the trail to catch, along with a few other species. A little further along I noticed a curious thing: a large number of dragonflies were swarming the side of a pair of evergreens, darting at the trees as though they were fish plucking flakes of food from the water’s surface. Most were Racket-tailed Emeralds, but there were a few Chalk-fronted Corporals and other emeralds among them. I walked up to the trees and immediately the dragonflies began to swarm around me as well, catching the deer flies buzzing around me. Eventually I saw one that interested me, and when I swung my net I was thrilled to see a female Brush-tipped Emerald inside!

Unlike the Racket-tailed Emerald and the baskettails, the Brush-tipped Emerald has two colourful yellow markings on the side of its bronze and green thorax and faint, pale stripes on the abdomen. Females have a spout-like ovipositor that projects backwards 45°, which is distinctive among the Somatochlora emeralds of our region; males have extremely hairy claspers, though I had yet to see this feature.

After releasing the Brush-tipped Emerald (she didn’t stay perched long enough to photograph in a more natural setting) I was surprised to see a Common Whitetail resting on my net. Chalk-fronted Corporals do this all the time; I had never seen a Common Whitetail land on my net before, and thought that it made for an interesting setting. Note the deer fly photobombing my picture!

A Wilson’s Snipe was flying above the field, and I watched it land in the grass near the edge of the trees. A few moments later it flew off again and disappeared over the pond. A large brown bird landed in a tree close to the water and immediately began to sing; I recognized the paired phrases of a Brown Thrasher, the first one I’d seen here before. It was such a gorgeous day that I stopped to take a picture of the field next to the trail. 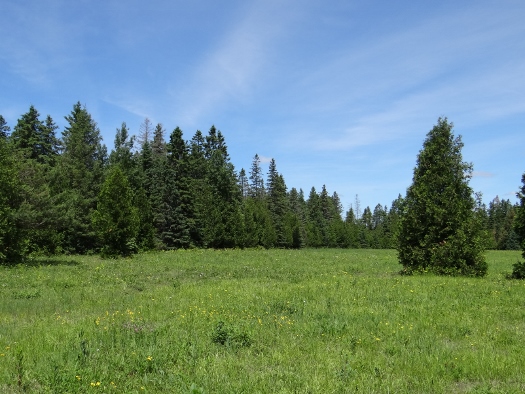 Along the Cedar Grove Nature Trail

I found another pair of evergreens being swarmed by dragonflies, including a couple of large Prince Baskettails soaring just above the tops of the trees, and spent some time watching them. A pair of dragonflies landed on a piece of wood on the ground next to me. One was a Chalk-fronted Corporal; the other was a Horned Clubtail.

I spotted a couple of baskettails among the swarm of Racket-tailed Emeralds; they have a thicker, spindle-shaped abdomen instead of the thin, black wasp-like abdomen which flares out into a large club. I netted two of them, both of which were Spiny Baskettails. 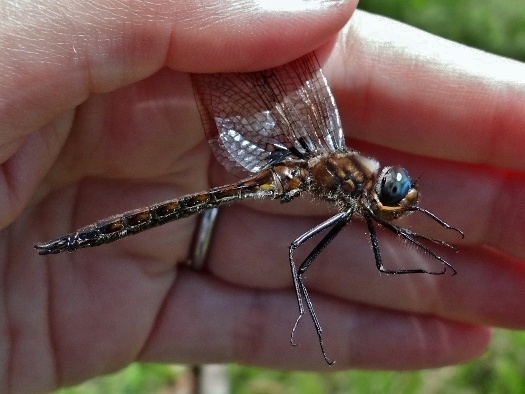 The eyes in this dragonfly were more blue than green, and it occurred to me that this fellow could be distinguished from the similar-looking Beaverpond Baskettail by the dark T-shaped marking on the frons (or the face). I had never thought to look for this field mark on any of the baskettails I’d caught before, and sure enough there was a large black T on the bronze-coloured face. 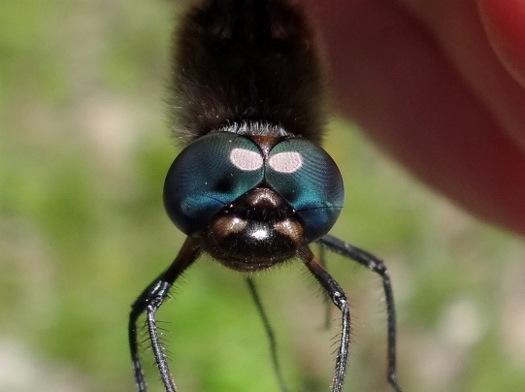 I had no luck with any of the Prince Baskettails, so I headed into the woods to check out the bridge. In a sunny clearing I spotted a large dragonfly flying a couple of feet above the ground. My mind was still on the Prince Baskettails, and for a moment I couldn’t think of anything else that would be so large, though the wings were not marked. Then it landed in front of me, hanging from the branch of a small shrub, and I realized it was a mosaic darner – something I hadn’t even considered since I usually don’t see these large black and blue dragons until the beginning of July. I checked out the stripes on the thorax and was further puzzled by the single thin, blue zigzag stripe. A Zigzag Darner? This species is in my Algonquin field guide but not the Ottawa checklist. I wanted to catch it – I didn’t even think about photographing it for some reason – but there were a couple of branches in the way and I missed. The darner rose up into the sky and vanished. I was disappointed, for this could have been a huge discovery. It now ranks as my biggest “miss” to date. I walked around the area for a while to see if it was nearby but I never saw it again.

At the bridge I found an Ebony Jewelwing fluttering in the vegetation; as expected, there was no sign of the Twin-spotted Spoketail. The toad from my last outing was also gone.

I headed back and checked the clearing again – still no darner. I did find my first Eastern Pondhawk of the year and a cooperative Racket-tailed Emerald sitting in a small cedar.

I went back to the evergreens where I’d caught the Brush-tipped Emerald and spent some time watching the swarm of dragonflies. When I spotted a likely looking dragonfly I swung my net, and caught another Brush-tipped Emerald – this one a male! The hairy claspers were visible even without using my magnifying lens.

This fellow’s eyes were bright green; you can see where the name “Emerald” comes from! You can also see the metallic blue-black face: 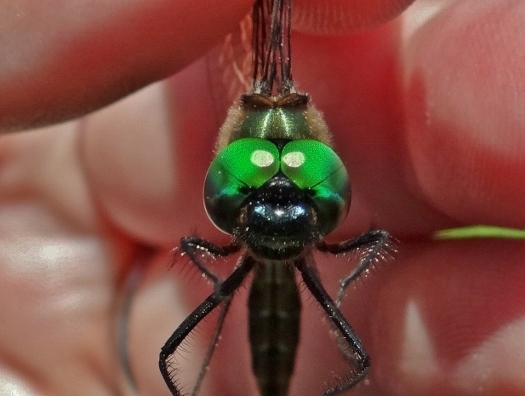 When I place the emerald on a branch, he stayed there for a few minutes, allowing me to get some decent photos of him. Males have a proportionately smaller abdomen than females, giving them a stocky appearance.

I stopped to check for Mink Frogs on the pond as I could still hear them calling from the water; I found a pretty Blue Flag Iris growing next to the water but still couldn’t see a single frog.

Another Racket-tailed Emerald was posing on a leaf close by so I took its picture, too.

The rest of walk back to the car was uneventful for odes, though I did find a couple of Aurora Damsels perching in a sunny patch at the edge of the parking lot. I thought this might be the last time I’d see one this year, but apparently they fly until mid-July in our area. Perhaps if I go back to look for the hypothetical Zigzag Darner I will see them again.

As always Marlborough Forest and Roger’s Pond were excellent for finding odes. I had four emerald species (Brush-tipped Emerald, Racket-tailed Emerald, Spiny Baskettail and Prince Baskettail), one clubtail (Horned Clubtail), lots of skimmers, and two darners (Common Green Darner and the mysterious mosaic darner). There were lots of Sedge Sprites in the vegetation as usual, and I identified a Hagen’s Bluet and a Taiga Bluet along the trail. I also saw a lot of neat butterflies, but as this post is getting rather long I will have to post them in my next one!

6 thoughts on “The Emeralds of Marlborough Forest”