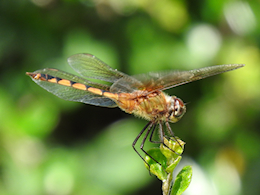 The Dominican Republic is home to 19 damselfly species and 48 dragonfly species. Of these species, four damselflies and three dragonflies are endemic to the island of Hispaniola – that is, they are found nowhere else on the planet. I did not know this when I went on my trip, however, as an amateur odonate enthusiast I certainly hoped to see a few colourful tropical species! I was a bit worried that there wouldn’t be very many odes within the resort itself, as I had heard that the resorts of Punta Cana regularly spray to keep mosquito populations down, and this would of course have an effect on all insect life breeding in the ponds and natural waterways where the chemicals are introduced. On our first two days at the resort I saw very few dragonflies – only two flying by without stopping to perch. On our third day I discovered the swamp at the top end of the resort when Manny Jimenes picked us up outside the security gate for our excursion to the National Park of the East. As our fourth day was spent entirely outside the resort (and I didn’t see any odonates on either excursion, although I’m sure there must have been some along the Chavon River), it wasn’t until our fifth day that I was able to spend more time walking up and down the road cutting through the swamp to look for odes.

After spending a profitable morning watching the herons and other water birds, I returned after lunch to look for insects. It was hot and sunny, just the perfect weather for dragonflies to be hunting. At my first stop I peered over a vegetation-lined fence into an area of shallow water surrounded by low shrubs and found a couple of dragonflies flying about, their wings glistening in the sun. One dragonfly kept returning to the same spot over and over, and even though it was quite far I was able to capture enough detail to identify it.

Given that there is little information on the internet about how to identify Dominican odonates, I used iNaturalist to narrow down the options. This one was suggested – and quickly confirmed – as a Red-mantled Dragonlet, a member of the skimmer family. Identifying characteristics appear to be the paired tooth-shaped spots down the length of the abdomen until the last couple of segments, and a coloured patch on both sets of wings adjacent to the body. 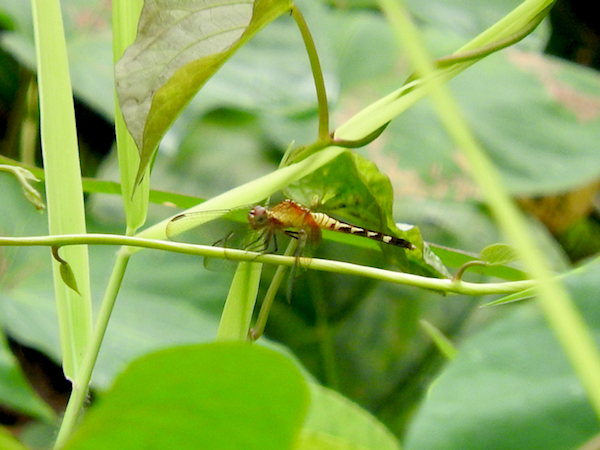 Fortunately I found a closer dragonfly in the wet spot across the road. This one was red instead of yellow, with dark red eyes, and a much more noticeable red patch on the wings. Once again iNaturalist suggested Red-mantled Dragonlet, and once again it was quickly confirmed by someone more familiar with tropical dragonflies than me! Give that there are two colour variations, I am guessing that they are like meadowhawks in which freshly emerged dragonlets start out yellow and turn red with age. Or perhaps females stay yellow, while only males turn red. Either way, the first Red-mantled Dragonlet looked very fresh while this one looks like it’s been around for a while. 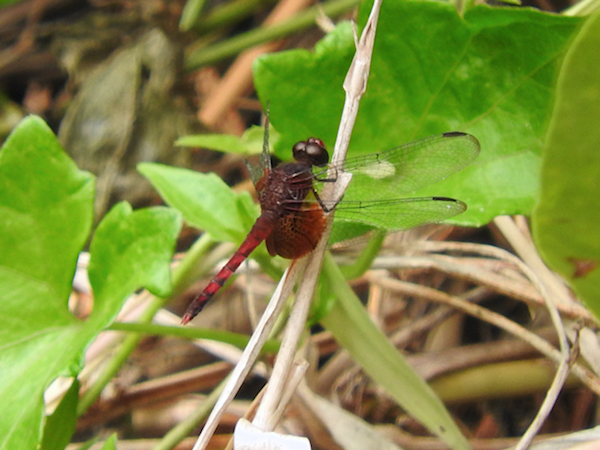 Something colourful on a leaf at about knee-height caught my attention, and I was able to get a couple of macro shots. iNaturalist suggests it is an Assassin Bug, a type of insect I know nothing about! 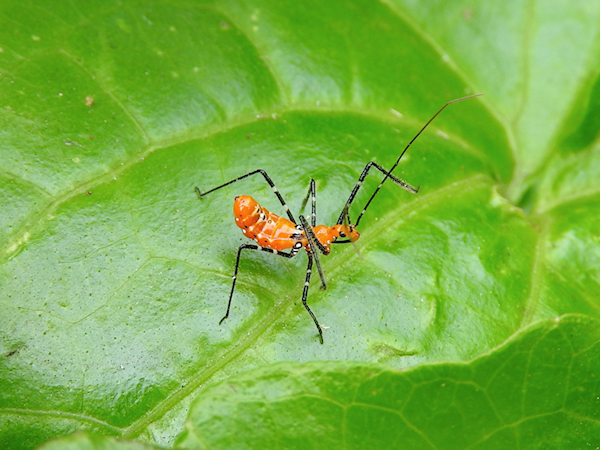 A little further down I found another dragonfly perching even closer; this one was a golden-yellow colour. It turned out to be another Red-mantled Dragonlet. 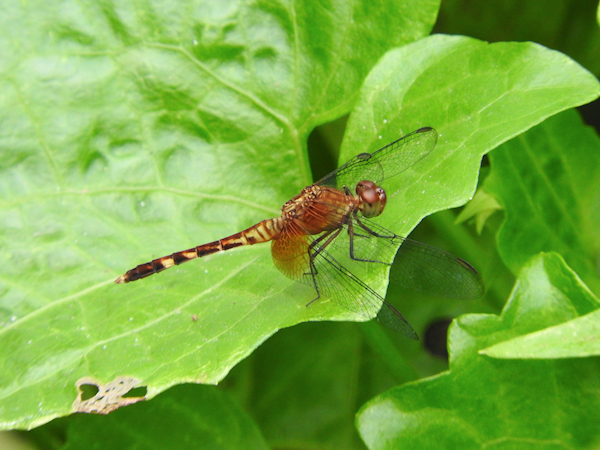 Then I spotted a different species. Its abdomen was thinner, but it had the forward-swept wings reminiscent of a meadowhawk and the green eyes reminiscent of a Blue Dasher. iNaturalist narrowed down the identification to the genus Micrathyria, a neotropical genus of dragonflies with green eyes and white faces known as tropical dashers. According to this list of West Indian Odonata by Dennis Paulson, only four species are found on Hispaniola, and of those species, only Micrathyria aequalis – the Spot-tailed Dasher – matches the size and shape of the spots of the abdomen. 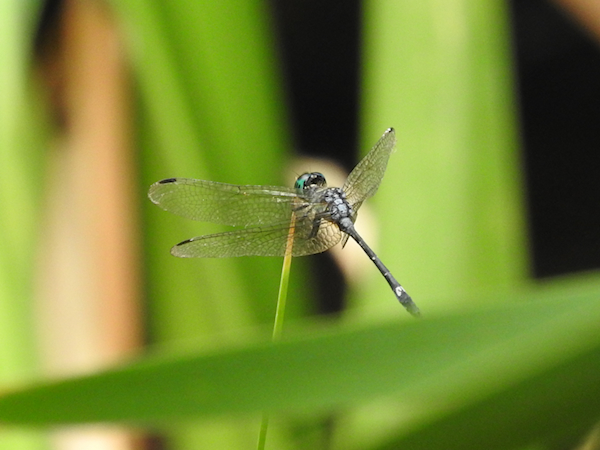 That was the last dragonfly I saw up near the security gate, but the herons were still active despite the afternoon heat. The Tricolored Heron was out in the open again, but soon got into a dispute with a Snowy Egret over who had the most right to the choice fishing territory at the edge of the swamp. 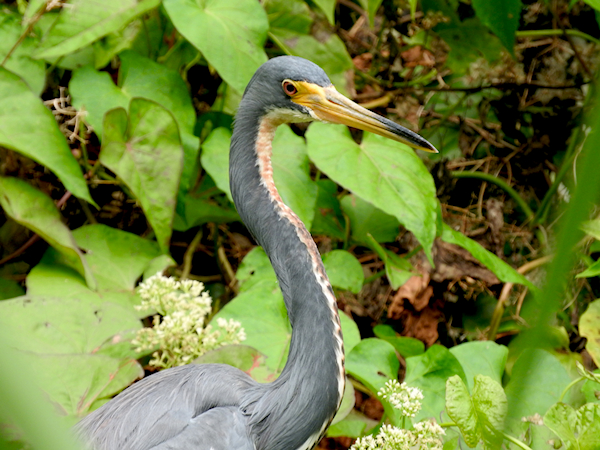 I think the Snowy Egret won that battle, as it took the prime spot on a log out in the open while the Tricolored Heron began skulking in the water. It actually photo-bombed my picture of the Snowy Egret! 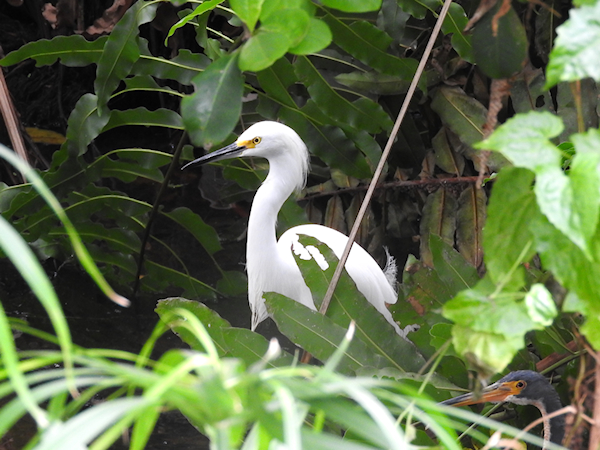 I crossed the road to look for insects on the other side of the road on my return to the resort. I still didn’t see any more odes, but the flowers in bloom were quite pretty. 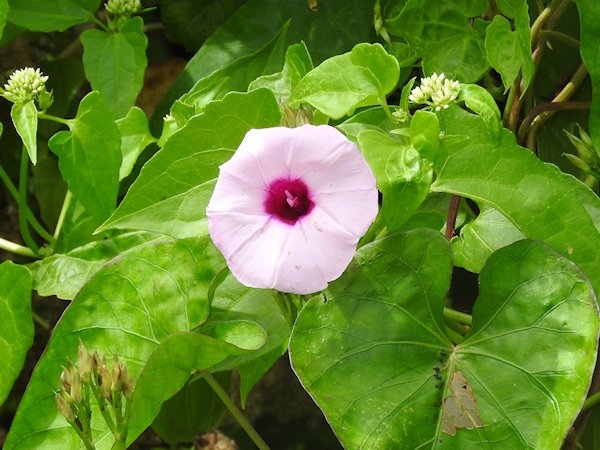 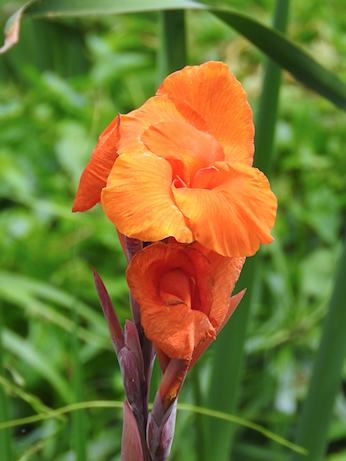 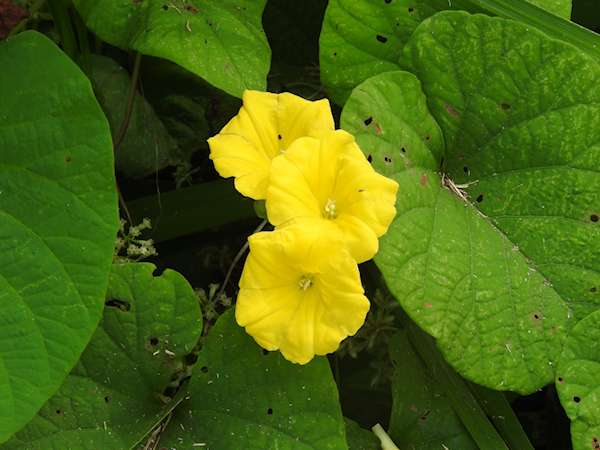 About halfway between the lobby and the security gate I saw a dragonfly sallying out behind the ornamental hedge. A low wall ran behind the hedge, and I found a narrow gap where I could climb up on top of the wall for a better look. The dragonfly was quite dark and quite red compared to the others, and I thought I had something new. Instead it turned out to be an old Red-mantled Dragonlet with lots of wear on the wings. 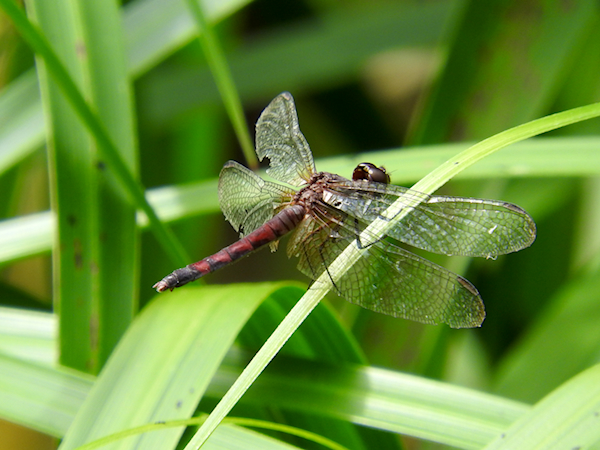 I stopped to look for butterflies and hummingbirds in the Lantana garden on my way back, and was glad I did. There were lots of skippers, as usual, but movement in the hedge behind the garden kept distracting me, until I got my binoculars out and realized a Bananaquit was feeding on the berries there! 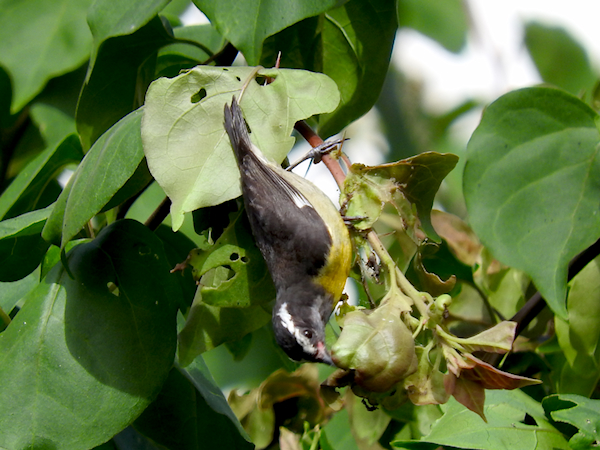 The Vervain Hummingbird came back while I was there. 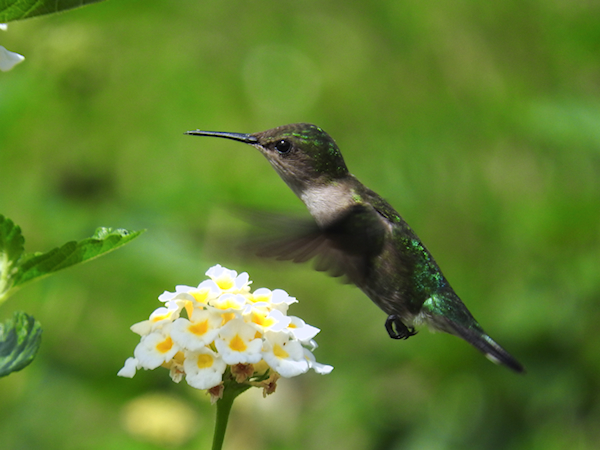 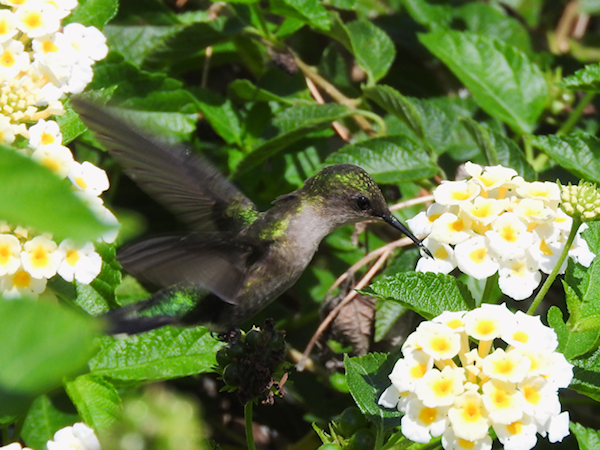 To my surprise a dragonfly flew in and perched on a tall stem emerging from the garden. It looped out a couple of times in chase of something, but returned to the perch both times. As a result, I was able to get my best photo of a Dominican dragonfly yet. iNaturalist had no problem identifying it for me, perhaps because this species makes it way into Florida and Texas. The Tawny Pennant is a brownish dragon with yellow spots running down the sides of the abdomen. The wings are tinted brown but have no spots. It is generally found in Central and South America, but its range in the southern-most parts of Florida and Texas make it a familiar tropical species to dragon-hunters in the southern U.S. 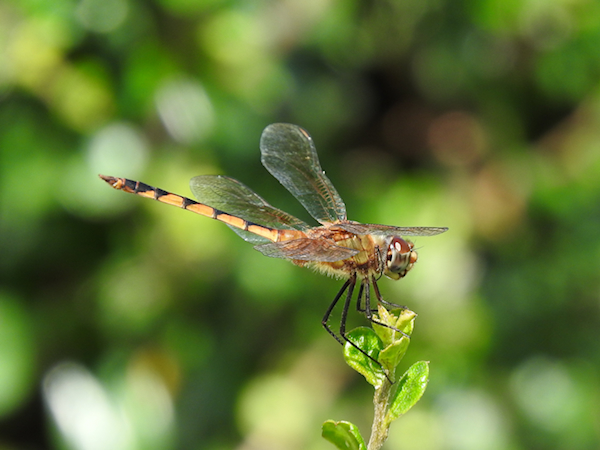 This was the last dragonfly that I managed to photograph on our trip, and only the third dragonfly species. I had hoped for more, but suspect I would have needed to get away from the beach and into the mountains where streams and ponds provide clean fresh water habitats for them to breed.

I only saw one damselfly on the trip, a red firetail in the shrubs growing along the edge of the swamp close to the security gate. I noticed it after Manny Jimenes had dropped us off at the hotel after our excursion to the National Park of the East. That was my first real odonate of the trip, not including the odd individual seeing flying around the resort.

My internet research led me to the genus Telebasis, or firetails. According to the Paulson checklist, there are only two firetail species in the Dominican Republic, and no one was able to confirm which one it was on iNaturalist. I later found two additional checklists of the odes of the Dominican Republic online. The first was a 2006 publication on ResearchGate.net entitled “Distribution of the Odonata of the Dominican Republic”. The second was a 1993 PDF article from The Dragonfly Society of America entitled “A Checklist of the Odonata of the Dominican Republic by Province”. These were both very helpful in noting that Telebasis dominicana – the West Indian Firetail – has been found in the province of La Altagracia, while Telebasis vulnerata – the Stream Firetail – has not. Further, the ResearchGate.net publication notes that the Stream Firetail prefers higher elevations and sites with shade, neither of which is true of where I found it on the resort. Both species are endemic to the Greater Antilles, where they are widespread. Based on these two publications, I am assuming that this is a West Indian Firetail. 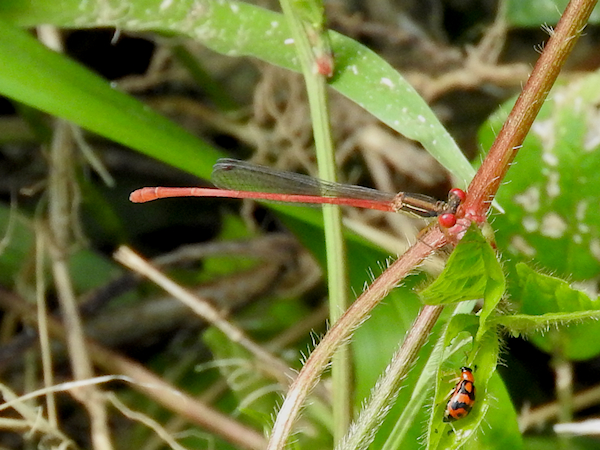 It was great to finally see and photograph some odes. While I could wish for a better variety of species, four species is still four more than what I would see in Ottawa right now. I just wished that there was a path through the swamp so I could get closer to them and see what else might be lurking in there!

Author’s Note: After this post was published, an entomologist from Spain (Dr. Joaquín Márquez-Rodríguez) contacted me regarding the specific location of the dragonflies I photographed, and asked for permission to use some of the images for the scientific paper he was writing. I gave him permission (I am usually happy to allow people to use my images for scientific or educational purposes, so long as permission is asked) and further details about my sightings.  His paper entitled “New records of Odonata from La Altagracia, Punta Cana, Dominican Republic” was later published on ResearchGate.net and reports six new dragonfly species in the province of La Altagracia, Dominic Republic – including the Tawny Pennant (Brachymesia herbida) and Spot-tailed Dasher (Micrathyria aequalis) that I photographed on the resort.  Apparently the eastern half of the Dominican Republic is not well surveyed for odes, despite the number of tourists who visit.  The six new species reported in Dr. Márquez-Rodríguez’s paper bring the total number of odonata found in La Altagracia up to 15, so I guess I didn’t do too badly with the only four species I did find!

7 thoughts on “Dragonflies of the Dominican”