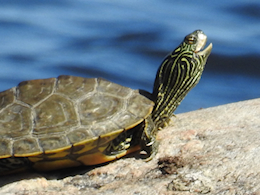 It’s been a good year for seeing Northern Map Turtles. They live in large, slow-moving rivers and lakes with a soft, mucky bottom and plenty of logs or rocks for basking, and while they are abundant in places like Petrie Island (before the floods, anyway) and the causeway at the Morris Island Conservation Area, I have rarely ever seen any close to home. This year, however, I found these turtles in three different places in Ottawa’s west end, fairly close to shore where they often find places to bask in the sun.

The Northern Map Turtle is considered to be a species at risk, as it is listed as Special Concern under both the Ontario Endangered Species Act, 2007 and the Federal Species at Risk Act, as well as being designated as a Specially Protected Reptile under the Ontario Fish and Wildlife Conservation Act. However, given the current political climate of favouring development over the protection of at-risk wildlife and the ecosystems in which they live, it is uncertain how long these laws and protections will remain in existence. Threats to the Northern Map Turtle include water pollution (due to its effect on molluscs, a primary food source), habitat loss and degradation, shoreline development, road mortality, fish hooks, and boat propellers. I’m not sure as to why I’m now seeing them along the shore of the Ottawa River within the city, or if that’s a good thing or bad thing – are they moving closer to shore because they have lost habitat elsewhere? Or are numbers doing so well that turtles are seeking new places to live? Fortunately, these turtles do not seem to hold much interest for poachers, as they are rarely used for food or the illegal pet trade.

END_OF_DOCUMENT_TOKEN_TO_BE_REPLACED 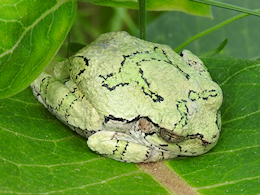 Although Bruce Pit is chiefly known as a popular dog park, the walking trails around the pond (which are not part of the off-leash area) are great for finding all kinds of interesting flora and fauna. I usually make a couple of trips to the pond each summer, looking for specific butterflies, frogs and odonates which are difficult to find elsewhere. Although it’s been a few years since I’ve seen some of the more unique insects – including American Copper, Eastern Red Damsel, Amber-winged Spreadwing and Saffron-winged Meadowhawk – other frog and insect populations are still doing well.

My first visit of the summer occurred on July 5th in the hope of finding an Acadian Hairstreak at the base of the toboggan hill – the only place I’ve ever seen one in the west end. I hadn’t seen any here since 2014 and 2016 and doubted they were still around, especially after I saw how few wildflowers were left to grow near the marshy area in my failed attempt to see them last year. I failed again on this visit, too, but proceeded to check a few other spots where the milkweed was blooming as these flowers are known to be insect magnets.

END_OF_DOCUMENT_TOKEN_TO_BE_REPLACED 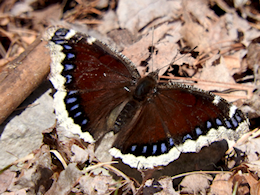 It’s been another slow spring; although the snow was quick to melt this year without any flooding, it took until the last week of April before temperatures reached a daily high of more than 10°C, and not once did Ottawa reach 20°C – in fact our highest temperature last month was 16.8°C (normally the highest temperature falls in between 20.7°C and 28.5°C). This is only the eighth time since records began in 1870 that April temperatures stayed below 17°C. Migrants have been slow to trickle in, however, this may be a reflection of the greatly reduced number of trails and habitats I visit rather than the actual number of birds passing through, as eBird sightings have been steady despite the cooler temperatures and persistent north winds. Despite the weather and the smaller area in which I’ve been birding, I’ve had some good mammal sightings in the past few weeks, and have seen my first butterflies of the season.

END_OF_DOCUMENT_TOKEN_TO_BE_REPLACED 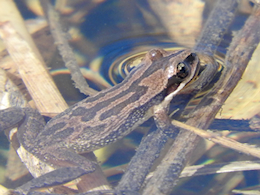 The day after I published my post “Birding in the Time of the Coronavirus”, one of my fears came to pass: the NCC announced it would be closing vehicle access to the Greenbelt as of 9 pm on Friday, March 27th until further notice. This meant that all parking lots at trailheads would be closed, and that trails such as Jack Pine Trail, Sarsaparilla Trail, Mer Bleue Bog and others would be inaccessible to those driving in. However, the trails themselves would be open for people who live nearby and can access the entrances on foot. On April 3rd the NCC website clarified that people can still walk through some of the NCC recreational sites, provided that they are not closed (i.e. Gatineau Park), they can be accessed locally, and people respect public health recommendations, including physical distancing of two metres. That same day our local rare bird alert coordinators decided to ban any alerts from being posted to our local RBA Whatsapp channel; this decision was made in conjunction with other southern Ontario RBA coordinators to prevent large groups of people gathering at rare birds sites. In addition, Parks Canada announced that all national parks and historic sites would be closed as of March 25th until further notice, with no vehicular access permitted. Ontario Parks had already closed all provincial parks as of March 19th.
END_OF_DOCUMENT_TOKEN_TO_BE_REPLACED 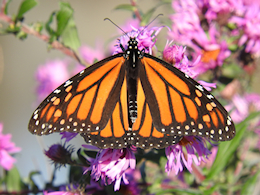 When I’m not busy looking for birds and bugs at the Eagleson Ponds, I’ll be at one of the many other trails and conservation areas in west end. Stony Swamp attracts its fair share of migrants, and is home to numerous fascinating reptiles, amphibians, and insects, so I spend a lot of time there in the warmer months. Jack Pine Trail and the Beaver Trail are my favourite trails as the loops are small enough that they can be completed quickly, with a variety of habitats to attract different wildlife; however, Sarsaparilla Trail can also be amazing, although the boardwalk is still closed for repairs. I really mean to spend more time at Old Quarry Trail and Lime Kiln Trail, but as these are a bit further away, with larger trail systems, I often opt for the convenience of one of the other trails instead – especially if I have plans to go elsewhere after, such as Mud Lake or Andrew Haydon park.

END_OF_DOCUMENT_TOKEN_TO_BE_REPLACED 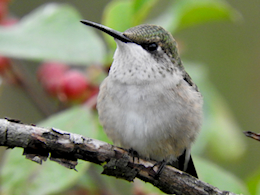 This morning I stopped by the Eagleson Ponds to see if any new migrants had arrived. Other than one unidentified flycatcher and one vireo – possibly a Philadelphia Vireo – it was quiet, with no warblers seen. The Green Heron had returned, and I heard a Gray Catbird again, but there were fewer shorebirds and migrants than there had been the day before. The day was mild, with a thick, damp overcast sky, so looking for insects was out. I decided to head over to the Beaver Trail, which can either be fantastic for migrants this time of year, or very quiet. After a disappointing visit to Mud Lake yesterday, I was hoping the woods and swamps would be more productive.

END_OF_DOCUMENT_TOKEN_TO_BE_REPLACED 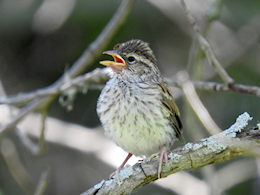 On July 4th I woke up and went for my usual early morning walk up to Morrison Point Road. I saw a Great Crested Flycatcher carrying food along Loves Lane, followed by a Yellow-bellied Sapsucker and two Hairy Woodpeckers in the same patch of woods; the Hairy Woodpecker was new for my Prince Edward County list. Along Morrison Point Road itself I observed the usual species, including two Indigo Buntings, a Rose-breasted Grosbeak, a Yellow Warbler, a Red-bellied Woodpecker, a Gray Catbird, and a Field Sparrow….I was really hoping to catch a glimpse of the Red-bellied Woodpecker, but again it was not to be. Five Barn Swallows were hunting in the fields near the barn, while two Killdeer roamed the grounds near the pond behind it.

END_OF_DOCUMENT_TOKEN_TO_BE_REPLACED 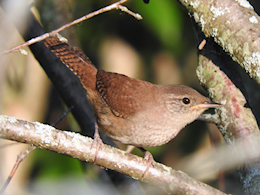 The more you look, the more you see….this is a common theme among those of us who spend our time outdoors with a camera or binoculars, looking for birds, bugs, or just about any facet of nature. The longer a person spends searching an area, whether a quiet bay on a lake, a small urban park, one of the best-known birding hotspots in the city, or even one’s own backyard, the more species a person seems to find – whether they be colourful wildflowers, a new dragonfly or butterfly, small insects they’d never noticed before, or birds that would have been missed if they’d left after that first cursory glance. This, to me, sums up the joy of going outside – it’s a treasure hunt where, instead of targeting one specific thing, any colourful or interesting creature that catches my eye is a treasure! It’s one of the reasons I return to the same spots again and again – to see what “new treasures” might be found there. So of course when I got tired of being indoors at the cottage we rented on Prince Edward Bay in Prince Edward County, I grabbed my camera and went for a walk.

END_OF_DOCUMENT_TOKEN_TO_BE_REPLACED 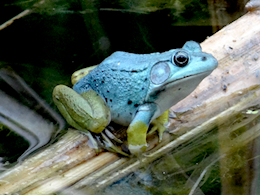 Andrew Haydon Park is best known as a dynamic birding hotspot in the fall and early winter (before the Ottawa River freezes) when various types of shorebirds and water birds stop over on their way south. The thickets and woodlots also provide cover for migrating warblers and songbirds, and hawks patrol the water’s edge regularly looking for an easy meal. The park is not visited by birders as often in the summer, possibly because they are ranging farther afield looking for uncommon breeding birds or rarities somewhere else, possibly because the park is usually full of picnickers and children and smoking barbeques and radios playing loud music after 10:00 am.

However, first thing in the morning, before all the people arrive, the park is full of birds. Common breeding birds, true, but still birds worth seeing as they are only here four or five months of the year, and watching them feeding and raising their young is always enjoyable. Even on a bright mid-July morning there is plenty of avian activity, and today I managed to find 32 species before 10:00 am.
END_OF_DOCUMENT_TOKEN_TO_BE_REPLACED 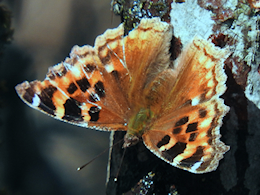 The following day was gorgeous, so I hit a few hotspots before returning to the Rideau Trail to continue my quest for the first butterflies of the year. My day started with a junco visiting my backyard for food, and a baby chickadee in our front tree emitting begging noises while fluttering its wings at the adult searching the gutters for insects or cached seeds. I had a Tree Swallow and a flyover Killdeer at Kristina Kiss Park, a drumming Ruffed Grouse and more Dark-eyed Juncos at Old Quarry Trail, and two Snowy Owls sitting on chunks of ice out on the river at Andrew Haydon Park. Only the Eastern Phoebe calling near the western creek made it seem like spring….it was slow to warm up to its alleged high of 15°C.