Back in August, while I was writing up my blog posts about my trip to Nova Scotia, I spent a lot of time scrutinizing my photos while deciding the best ones to include. I was going through my photos from our trip to the Bird Islands IBA when I discovered a photo of this bird among my many photos of the Atlantic Puffins, Razorbills and Black Guillemots swimming in the ocean: 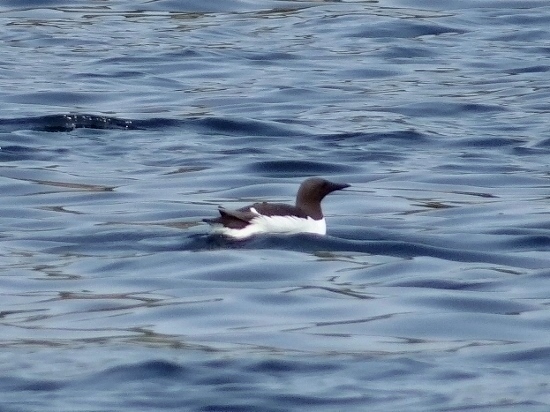 I got a horrible sinking feeling when I realized that this wasn’t a Razorbill as I had thought, that I actually didn’t notice this bird while I was photographing it – and that it would have been a lifer! At that point on the boat tour I was photographing the birds on the water, trying to get some decent photos of the different sea birds. They were too far to identify without the binoculars so I wasn’t paying attention to which species I was photographing. The only black and white alcids I actually saw (and identified) were Razorbills and Black Guillemots. This is neither – but looks like a cross between the two. When I checked my field guide, I realized it was a murre. However, there are two murre species possible on the east coast – Common Murre, which is quite numerous, and Thick-billed Murre, which is much less common – so I asked my friends on Facebook what they thought it was. The consensus was that this was indeed a Common Murre: Thick-billed Murre is blacker with a well-defined white wedge into the throat area, and has a white line along the cutting edge of the mandible. Also, Common Murre is the “default” murre in those parts.

END_OF_DOCUMENT_TOKEN_TO_BE_REPLACED 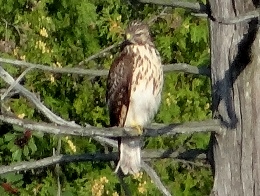 The Red-shouldered Hawk is a secretive woodland hawk which can be difficult to find in the Ottawa area outside of a few known locations where they breed. They prefer dense, mature hardwood forests close to wetlands and lakes, and in Ontario, are most abundant along the southern edge of the Canadian Shield and on the Frontenac Axis. In Ottawa, they are most commonly seen west of the city, with the Constance Lake and Constance Bay areas the best spots to find these birds. They are more conspicuous when they first return to their breeding grounds in late March and early April, vocalizing frequently during courtship and up until incubation begins. Once the breeding season gets under way, however, they fall silent and become difficult to detect.

END_OF_DOCUMENT_TOKEN_TO_BE_REPLACED 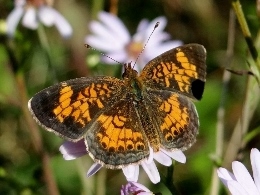 Changing the calendar page from August to September is often a bittersweet moment. On the one hand, songbird migration is just starting to hit its peak, with all sorts of colourful warblers, vireos, grosbeaks, orioles and tanagers moving through the region. It is an exciting time for birding, which will be excellent from the beginning of September through to the end of November – and perhaps beyond. On the other hand, the warm summer days are definitely numbered, with hints of fall showing in the changing colour of the leaves and cooler mornings. Insect diversity is much lower, and by the end of the month perhaps only a couple of odonate species will be left. Autumn is in the air, and even though birding is now my main focus, I still take the opportunity to photograph the colourful and interesting non-avian species that cross my path, as each sighting could be my last until next season. Here are some of the critters that I’ve seen in my travels lately.

END_OF_DOCUMENT_TOKEN_TO_BE_REPLACED 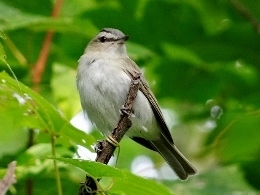 The end of August is the beginning of one of my favourite birding seasons: fall migration.  Even though identification is more difficult in the fall than in the spring – birds in winter or non-breeding plumage can be very drab and often resemble other species – the volume of birds seems to be greater and the migration process takes longer, commencing in August and ending in December. This means that every outing has the potential to turn up something interesting, whether a year bird, a life bird or a real rarity. I’m not particularly adept at finding rarities, but I do enjoy seeing species that I haven’t seen since the spring, and watching them feed and interact with other birds. Here are some highlights from the beginning of migration.

END_OF_DOCUMENT_TOKEN_TO_BE_REPLACED

I had a fabulous outing in Stony Swamp on August 22nd. I started the morning off at Sarsaparilla Trail where I found a pair of Hooded Mergansers, two Pied-billed Grebes (an adult and juvenile), and five Wood Ducks on the pond. A small raptor was perched in one of the dead trees at the north end of the pond; it was so far off that I had to return to the car and get my scope to identify it. It was a Merlin – a species that I only find here late in the summer, individuals either migrating or undergoing post-breeding dispersal. At least six Blue Jays were also present, and kept chasing the Merlin from tree to tree. Three Northern Flickers were also flying around, and I don’t know if they were also giving the Merlin a hard time, or if the Merlin was trying to catch one of them. It was fascinating to watch the flickers, Blue Jays and Merlin all playing an animated game of musical chairs in the trees.

I was glad I had brought my scope, for as I was scanning the vegetation along the shoreline I discovered two heron species skulking at the edge of the pond: a tiny Green Heron poised on a log, and an American Bittern that was almost invisible in a gap in the reeds! It made me wonder what other birds were present, going about their lives while remaining hidden from view.

END_OF_DOCUMENT_TOKEN_TO_BE_REPLACED 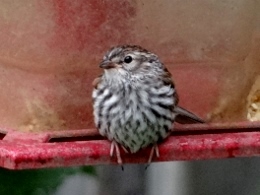 I live in a townhouse in suburbia, so my backyard is quite small. The front yard is even smaller since our driveway takes up half of the property, but I do have a large shrubby tree right outside my front window that attracts some interesting birds every once in a while (I have not gotten around to identifying said tree, though I’m sure many of my naturalist friends would know what it was if I sent them some photos and asked; it’s sort of fun leaving it as a mystery). The most recent addition to my “front tree” list – which includes Wilson’s, Yellow, and Yellow-rumped Warblers and a female Purple Finch – was a Red-eyed Vireo singing in the foliage last May. Lately, a pair of cardinals have taken to roosting in the tree at night. I’ve seen evidence of this in the form of bird droppings on the car every morning, and know it’s the cardinals because I hear their metallic chip notes outside my computer room window just after sunset and before sunrise most days.

END_OF_DOCUMENT_TOKEN_TO_BE_REPLACED

On August 16th Chris Lewis and I went to the Bill Mason Center to do some dragon-hunting. As the weatherman was predicting a steamy high of 30°C with 100% humidity, we met at 7:30 in the morning in order to beat the heat. For the second day in a row, a thick early-morning fog hung low over Ottawa, but once we arrived at the sand pit we found a bright, sunny morning with no trace of fog. It was really starting to warm up by then, but as it was still early in the day, all we saw at first were a couple of darners we accidentally scared up from the vegetation along the northwestern side of the pond. None were cooperative; instead of settling back down in a spot where we could see them, they zoomed off altogether.

END_OF_DOCUMENT_TOKEN_TO_BE_REPLACED 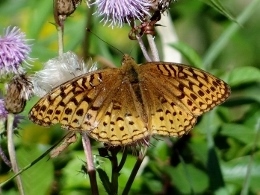 On Sunday August 9th I made plans to go birding and dragon-hunting with Chris Lewis. Our plan was to meet at Shirley’s Bay at 8:30, but I was up early enough that I had time for a quick check at Mud Lake before our meet time. A few early migrant warblers had been found along the river, and I was hoping to spot a few. My goal was to check the scrubby field west of the lake and the ridge quickly before driving over to Shirley’s Bay.

END_OF_DOCUMENT_TOKEN_TO_BE_REPLACED

On Saturday, August 8th I spent my morning in the west end, heading out early (6:40 am) to the Richmond Lagoons before returning to the unnamed Stony Swamp trail on West Hunt Club Road. According to the official NCC map, this trail, which starts at parking lot no. P11, is designated as Trail #26. This is where I had the Black-billed Cuckoo on July 26th and found a good number of birds to add to the eBird checklist for this site. I wasn’t sure if I could repeat that feat, but it seemed worth a try.

The Richmond Lagoons were very rewarding, though difficult to navigate as the side trails had not been mowed in some time. Worse, the dreaded Wild Parsnip has invaded the area. I first noticed huge swathes of this plant along the side of Highway 417 just outside the city while driving back from Nova Scotia in mid-July. Since then I’ve noticed it growing in the ditch along Old Richmond Road and small patches at Mud Lake (right where Chris and I started our dragonfly walks a few years ago) and Trail #26. This plant has gained a bad reputation for its phototoxic properties – if get the sap on your skin and are then exposed to sunlight, it will burn you.

END_OF_DOCUMENT_TOKEN_TO_BE_REPLACED 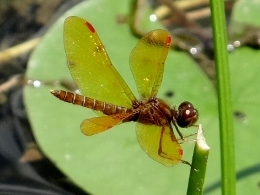 On August 2nd, 2015 I led a dragonfly outing at Petrie Island for the Ottawa Field-Naturalists’ Club. Because I would be leading it on my own, and because the small size of dragonflies and damselflies makes it difficult to point them out to large groups, I decided to limit the group to ten people. Fellow dragon-hunters and Birds Committee members Chris Traynor and Lorraine Elworthy signed up for the outing, as did Jakob Mueller, who led the reptile and amphibian outing at Sheila McKee Park earlier in the year. I recognized Lynne Ovenden from the OFNC; the others were all unknown to me.

I started our outing by talking about the differences between dragonflies and damselflies, as well as the different groups belonging to each family. We would be looking for spreadwing damselflies, which hold their wings out at a 45° angle instead of parallel to their back; emeralds and darners, which are most commonly found flying through the air searching for aerial prey; and skimmers, which tend to hunt from a perch and are usually the most approachable types of dragonflies for photography. As I was speaking, a bright green female Eastern Pondhawk was hunting from a perch in the vegetation, often flying out to snatch an insect from the air. At one point it even landed on one of the group members!