On October 9, 2021 eBird celebrated its fourth annual October Global Big Day. I participated in this event last year and ended up with 50 species; I probably could have done better if I had planned for it properly instead of deciding halfway through the morning that I wanted to do a personal big day. This time I planned for it, but health issues limited my time outside in the field to the morning only.

I had a much better idea of where I wanted to go this time, and unlike the Global Big Day last May, which was limited due to COVID-19 lockdown restrictions then in place, planned to leave my 5-mile radius. After a great outing at Bruce Pit on Monday in which I tallied 40 species, the loop around the pond was sure to help me reach my goal of beating the 50 species I tallied last year. I also planned to hit a couple of trails in Stony Swamp (a short walk along the Rideau Trail at the P6 parking lot and Sarsaparilla Trail), the Ottawa River for diving birds, the Eagleson ponds for shorebirds, and the Moodie Quarry/Trail Road landfill for gulls and more waterfowl.

END_OF_DOCUMENT_TOKEN_TO_BE_REPLACED

A Barnacle Goose showed up in Ottawa earlier this year, although at first I didn’t pay much attention to the reports. It was observed along the Rideau River between Hurdman and Billings Bridge on May 28th and 29th, and if I had been working downtown at the time – only a short train ride from Hurdman – I might have gone to chase it, despite the concerns about the bird’s lineage. The thought at the time was that it might have had some Canada Goose ancestry, and Billings Bridge was too far out of my way to chase a bird that might or might be countable on a work day. The bird disappeared for a while, then showed up again in the west end on June 23rd – this time at Nortel Marsh – before spending the first week of July at Wesley Clover Parks just off of Corkstown Road.

END_OF_DOCUMENT_TOKEN_TO_BE_REPLACED

Winter finally arrived yesterday with a mix of freezing rain and snow that left my driveway a frozen sheet of ice and kept me indoors most of the day. The temperature dropped overnight, and the high today reached only -8°C – the first really cold day we’ve had this winter. Even worse, there is a winter storm warning currently in effect that will last from midnight tonight until the following midnight. Environment Canada predicts 20-35 cm of heavy and blowing snow, so despite the cold I knew I had to get out today if I didn’t want to be stuck indoors for three days straight.

I didn’t leave until after lunch, when the temperature finally rose above -10°C (I just wasn’t ready for those minus double-digits yet)! My first stop was Century Road south of Richmond to check on the Mountain Bluebird. It’s only a 15-minute drive from my house, and as I was quite taken with this bird I was looking forward to seeing her again.

END_OF_DOCUMENT_TOKEN_TO_BE_REPLACED

On Saturday, November 28th, two rare birds were discovered in the Ottawa area. The first was the Mountain Bluebird on Cambrian Road which I learned about early Sunday morning after receiving a rare bird alert from eBird. I wasn’t the only birder who went over to Cambrian Road first thing Sunday morning, and while I was there I heard about the “unusual-looking oriole” oriole in Pakenham. A couple of friends were heading out there next to check out the bird, and they later sent out a rare bird alert stating that the oriole was not a Baltimore Oriole (the only species of oriole which breeds in our region) as had been surmised, but a drab female Bullock’s Oriole – a southwestern bird whose Canadian range extends only into southern BC, Alberta, and Saskatchewan. This was another mega-rarity for our region, and even made the CBC news.

END_OF_DOCUMENT_TOKEN_TO_BE_REPLACED 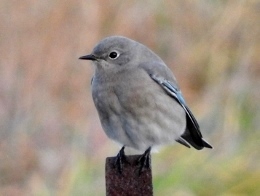 The rare female Mountain Bluebird first discovered on November 28th on Cambrian Road went missing two days later. Just moments after its last sighting, a Sharp-shinned Hawk was seen carrying a thrush-sized bird in its talons, and as the bluebird was never seen on Cambrian Road again, it was presumed dead. This was the first time this western species has been recorded in Ottawa, and it appeared to be a sad ending for the long-distance wanderer.

Then, on December 11th, Peter Blancher – the same person who discovered the Mountain Bluebird on Cambrian Road east of Richmond – reported a female Mountain Bluebird on Century Road south of Richmond! It was too great a coincidence, and many people were happy to hear that the bluebird did not, in fact, become lunch for the hawk. As Century Road isn’t too far from me, I headed there first thing on Saturday morning just after the sun had risen. It was still hiding behind a thick bank of clouds lying on the eastern horizon when I arrived; the light was poor, but I had no problems finding the Mountain Bluebird perching on the fence right next to the road.

END_OF_DOCUMENT_TOKEN_TO_BE_REPLACED 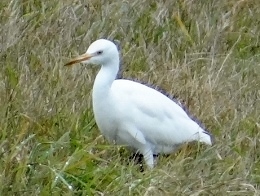 First there was the Yellow-crowned Night Heron west of Carp at the end of May. Then there was the Little Egret which appeared in Carp at the beginning of June and then spent some time along the Ottawa River in mid-July. These birds range from quite rare in Ottawa to MEGA-RARE!!! in Canada, and both birds were lifers for me. Although there are three previous records of Yellow-crowned Night-herons in Ottawa (in April 1970 at Rockcliffe Park, in May 1999 at Mud Lake, and in April 2007 in “Ottawa” – perhaps the bird that was seen briefly at Billings Bridge but never relocated?), this was the first time one had lingered long enough for me to see it. The Little Egret was not just a first record for Ottawa, but a first record for Ontario! I never thought I’d see more than one rare heron in a calendar year, let alone two rare herons in two days.

END_OF_DOCUMENT_TOKEN_TO_BE_REPLACED 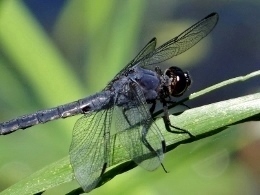 On Friday, June 26 I took the day off work to go dragon-hunting at Morris Island. First, however, I stopped in at the Deschenes Rapids parking lot at the end of Woodroffe Avenue to go searching for not one, but two rare birds. The Little Egret was back after having spent some time wandering along the Jock River near Manotick, the ponds along Eagleson Road, the pond near Palladium Drive in Kanata, and however many unknown places in between. The egret has finally found a spot to its liking along the Ottawa River, spending the past few days at the mouth of Pinecrest Creek on the east side of Mud Lake or along the shore of Andrew Haydon Park in the mornings before flying off to spend the day elsewhere. In the evenings, it has been seen flying in to roost on Conroy Island, presumably because it feels at home with the colony of Great Egrets, Black-crowned Night Herons and Ring-billed Gulls that nest there. This pattern has become somewhat predictable, so that many people who missed it elsewhere have been able to see it.

END_OF_DOCUMENT_TOKEN_TO_BE_REPLACED

Ottawa was blessed with not one, but two rare birds in late May and early June. On May 25th I received word of a Yellow-crowned Night-Heron west of Carp. It was on private property, and while the homeowner didn’t want people wandering around her large property uninvited, she was gracious enough to escort interested birders around if we waited at the end of the driveway for her to come and get us.

I went out on the last day of May to try to see it, killing time along the Thomas Dolan Parkway as I didn’t want to show up too early. It was a miserable day – cold, overcast, and only 8°C. I didn’t feel like spending much time outside, but I did check a few spots for Golden-winged Warblers and Eastern Towhees without any luck. When I arrived at the property on Abbeywood Drive, one car was already there, but the driver appeared to be sleeping. Mary, the homeowner, came out about 10 minutes after I parked my car; by that time the other driver, Paul Lagasi, had awakened, and the three of us went around to her huge backyard together to search for the Yellow-crowned Night-Heron. Her property boasts a large pond which is home to three families of Canada Geese and many dragonfly species (though none were flying that day) and a creek at the back which attracts various herons (including nesting Green Herons and the Yellow-crowned Night-heron). We also observed Eastern Bluebirds, a few different warblers, and three different flycatchers (Eastern Kingbird, Eastern Phoebe, and Eastern Wood-pewee), all of which made me jealous of her yard list. Unfortunately Paul and I did not find the heron or the Mourning Warbler that others had heard the day before, so we both went home empty-handed.

END_OF_DOCUMENT_TOKEN_TO_BE_REPLACED

We got up early on Monday, May 11th for our day at Point Pelee. While we were paying at the kiosk we were told there were two good birds present: a Prothonotary Warbler and a Kirtland’s Warbler. I had seen the rare bird alert for the Kirtland’s Warbler the day before, and was happy to hear it was still around. I had never seen one before (unlike the Prothonotary Warbler) so it would be a lifer for me if I found it. Fortunately, this was easy to do. We took the tram to the Tip and after we had gotten off the shuttle, I came across a group of people who said it was being seen along the footpath that parallels the western beach. I told my mother and step-father and off we went. After about a 10 minute hike with numerous people coming the other way assuring us “it was still there – just look for the crowd of people”, we found a huge throng of people gathered in a tight group. At the center of all the attention, no more than six feet away from the edge of the path, was the female Kirtland’s Warbler.

END_OF_DOCUMENT_TOKEN_TO_BE_REPLACED

The Easter long weekend is a great time for birding, particularly when it falls toward the end of April. The weather is nicer, migration is well under way, and there is a greater variety of wildlife to be found. I spent Good Friday visiting the various trails of Stony Swamp: first an early start at the Beaver Trail, followed by a lengthy walk at Jack Pine Trail, and finishing up with a quick scan of the pond at Sarsaparilla Trail.

When I arrived at the Beaver Trail, I spent a good ten minutes just watching a flock of sparrows feeding on the ground just beyond the parking lot. Most of them were American Tree Sparrows heading back north to their breeding grounds at the edge of the Canadian Tundra; however, a couple of juncos and Song Sparrows were feeding with them, and I thought I might see my first Fox Sparrow. I didn’t have any luck with the Fox Sparrow, either there or with the large flock of juncos near the Wild Bird Care Centre.