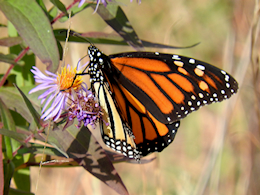 I never thought I would see three butterfly species on a single day this late in October. But when the forecast called for a sunny high of 24°C on Friday before dropping back down to a week of temperatures hovering in the single digits, I took an extended lunch to explore one of my new favourite places: Steeple Hill Park in the small village of Fallowfield. As soon as I pulled up to the soccer field behind the church I saw a Turkey Vulture gliding south, followed by a Red-tailed Hawk heading in the same direction. I didn’t see many other bird species this late in the day (it was after 1:00 by the time I arrived), even though I started in my usual spot in the weedy field behind the graveyard. There were no sparrows in the field today, and it wasn’t until I reached the furthest corner that I saw my first butterfly: a worn Clouded Sulphur fluttering close to the ground. The day was quite breezy, and the sulphur kept landing low among the vegetation where I couldn’t get a decent photo. Then, as I was following it around trying to get an unobstructed photo, I found a second butterfly, this one much smaller: an Eastern Tailed Blue. 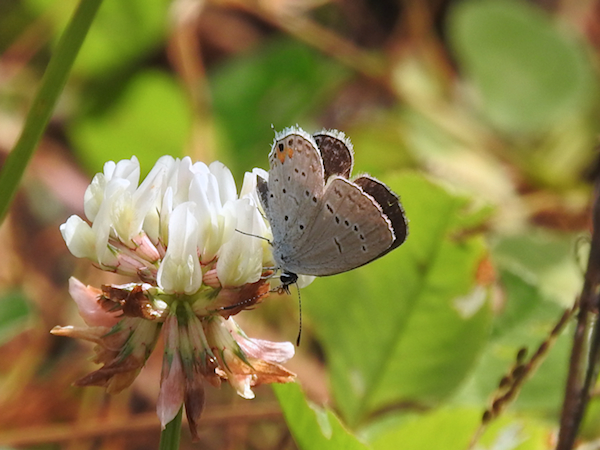 The Eastern Tailed Blue is one of our earliest-flying and latest-flying butterflies each season, as there are two to three overlapping generations each year in Ontario. This species overwinters as mature caterpillars which often seek protection from the elements inside seed pods. I was surprised to see it, especially as it did not appeared tattered or faded the way long-lived individuals become after a difficult life in the wild.

Instead of returning to Steeple Hill Park, I followed the orange arrows to Khymer Court to see where the Rideau Trail led from there. According to Google Maps, a section of the famous Ottawa-Kingston trail creates a dead-end loop at the end of Khymer Court, and I was curious to see what the habitat looked like. I knew I didn’t have enough time to do a full exploration on my lunch break, but a quick investigation showed some more open habitat with a few shrubs. The trail runs next to an active quarry, with a large berm blocking any views of the quarry site. I did notice some wild asters growing in a small open area next to the trail, and two butterflies – a Monarch and a Clouded Sulphur – were busy feeding on the nectar.

The Monarch should have been long gone by now, especially given that there aren’t very many food sources left this late in the season. It was lucky to find the asters, and take advantage of the energy they provided for its journey south. 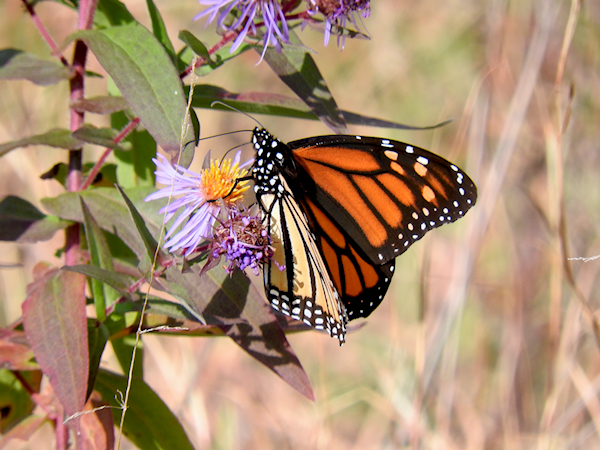 The other butterfly was another Clouded Sulphur. This one was more willing to have its picture taken as it, too, flitted from flower to flower.

The Clouded Sulphur is the longest flying butterfly of Family Pieridae (the whites and sulphurs) in our region, along with the Cabbage White. Both species have at least two generations in our area, and both overwinter in chrysalis form, ready to emerge in the spring once the temperature warms up enough. While both butterfly species usually linger on until the end of October, in warm years they might even be seen through mid-November. Indeed, we had such a warm spell this year, lasting from November 5 through November 11 where the daily high ranged between 18 and 23°C; I was lucky and found two Clouded Sulphurs at the Eagleson ponds on Remembrance Day!

I was thrilled to see these three species so late in the year. What’s particularly interesting about them is that none of them overwinter in adult form. Species such as Mourning Cloak, Eastern Comma, and Compton Tortoiseshell are present as adults in Ottawa during the winter, hibernating in brush piles, tree cavities, and beneath tree bark in deciduous forests; they will often emerge on warm days late in March or even earlier if weather conditions are right. However, despite the fact that each of these butterflies is still around in good numbers, they are not often seen after the first half of October. This is likely because temperatures have dropped low enough by then for them to start their hibernation.

I returned to Steeple Hill Park without seeing anything else of interest – until I reached a small trail running adjacent to a row of pine trees. I must have seen the snake before fully registering it, because I thought “Oh! Don’t step on the snake!” and took a giant step forward before asking “Wait – what snake?” When I looked down I saw this tiny snake right in the middle of the path.

It was a nearly-perfectly camouflaged Red-bellied Snake, a species I rarely see in Ottawa even though they aren’t particularly rare. The Red-Bellied Snake is the smallest snake in our province; it grows up to 40 cm in length, and the first time I saw one I thought it was a worm in the middle of the path – except it wasn’t moving like a worm at all.

While the underside is typically a variation of bright red or orange, it is brown on top with a few light spots just behind the head which often merge together to form a partial ring. The scales are keeled, or ridged, rather than smooth, which helps to distinguish it from the Ring-necked Snake. Red-Bellied Snakes prefer forest edges, fields, and meadows with plenty of logs, brush piles and rocks to provide cover. They feed on invertebrates such as earthworms, snails and grubs and thus are considered beneficial. 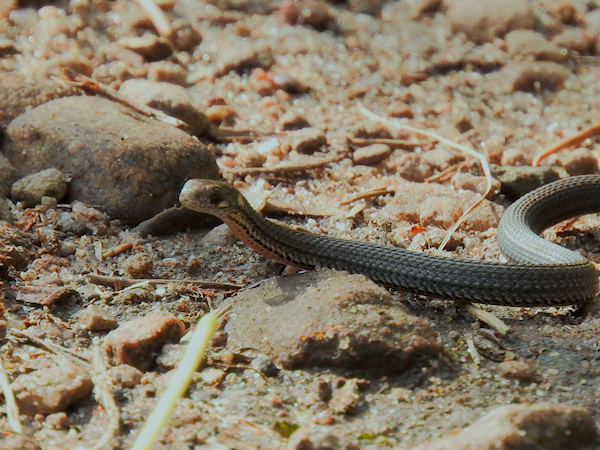 While I was happy to see the three different butterfly species, finding the Red-bellied Snake was particularly thrilling given that I haven’t seen this species in Ottawa in a number of years (I can’t even remember when I last saw one, but I do recall it was crossing the trail at Jack Pine). Altogether it was a wonderful walk, and a wonderful chance to see some of these species for the last time this season.

One thought on “Unseasonal Warmth”