In most years dragonfly season begins around the Victoria Day weekend (which always falls on the third Monday of May). I remember visiting Mud Lake on the long weekend in years past and seeing up to a hundred of freshly emerged dragonflies perching in the trees there. However, in the last few years it seems that dragonfly season has started later than normal – the long-lingering cooler spring weather has played a large part in this, as emergence depends chiefly on the temperature of the water the dragonfly nymphs are living in. By the second weekend of May I’d go out eagerly hoping to see the first dragonflies of the year, and by the end of May I’d still be looking for them. Even when I eventually found some, such as last year, numbers would be low, and it would take time for the season to get back on track. Numbers remained low in Ottawa all summer last year for some reason, though we think that the unprecedented spring flooding might have been the cause, either washing away the small nymphs or dumping unhealthy amounts of debris, sediment, and chemical-laden runoff in areas where they breed.

The earliest dragonflies to emerge belong to two of the five families: the emeralds and the skimmers. Skimmers are the most easily recognized dragonflies, as they are found in all wetland habitats, along roadsides, and in old fields, and spend most of their time perching on rocks, logs, or vegetation overlooking the water or road. The first skimmers I see are usually the whitefaces (Dot-tailed, Frosted and Belted) and the Chalk-fronted Corporals.

Emeralds spend most of their time in flight, and usually have dark bodies with bright green eyes at maturity (although some, like the baskettails, have blue eyes). I tend to find them perching earlier in the day, before it gets really warm, or shortly after emergence. When they aren’t perching they are usually flying over bodies of water or patrolling forested paths near water. The first emeralds on the wing in Ottawa are usually the American Emerald, and the baskettails – four species of which call our region home. Prince and Common Baskettails, which emerge later than the other two species, are the most difficult to find perching, although their wing patterns are different enough from the others to be able to identify them by sight alone. Spiny and Beaverpond Baskettails, two of the first dragonflies on the wing in Ottawa each season, look a lot alike, but fortunately both of these like to perch early in the season. Beaverpond Baskettails are slightly more common in Ottawa, and this is usually the first species I see each year.

Dragonfly season began for me on May 19th, a cool, overcast morning. Although we’ve had a couple of days reach the 20°C mark earlier in the month, it hadn’t reached that temperature again until the day before. I went out into my backyard before work to fill the birdfeeder (yes, I’m still working from home during the pandemic), and once that I was done I returned to the house – and found this fellow doing a handstand on my back deck. 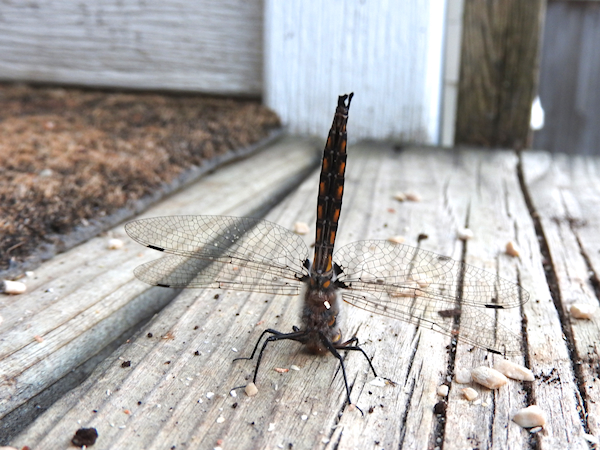 Now, I live in a townhouse, with the original deck that the house came with. It is just large enough for our barbecue, and takes two steps to get from the back door to the top of the stairs. I would not have missed seeing it on my way out. It wasn’t moving, so I picked it up for a closer look. It was a male Beaverpond Baskettail, easily identified by the shape of its claspers – they angle sharply downward, while the similar-looking Spiny Baskettail has upwardly curving claspers that form a sinuous S-shape. This was not only my first dragonfly of the season, it was also the first confirmed Beaverpond Baskettail to visit my yard! I placed the baskettail on the side of my barbecue as I didn’t want any visiting chipmunks, birds or squirrels to find it on the ground and devour it. It stayed there all morning, then disappeared once the sun came out. 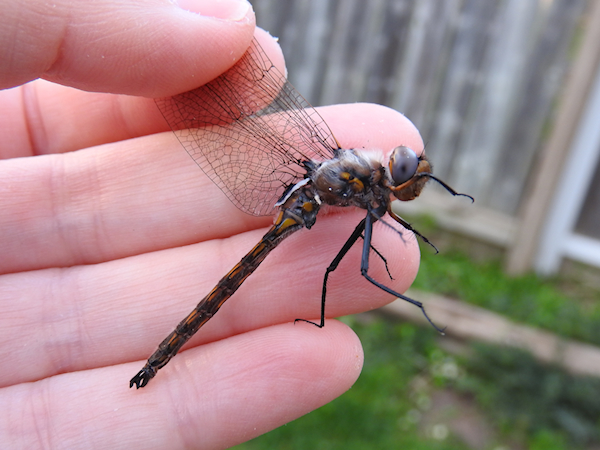 I was thrilled to see my first dragonfly of the year in my own backyard, so when the weekend came I headed out to the South March Highlands to look for more. We’d had a nice string of days reaching the mid-twenties, and Saturday dawned bright and sunny, making it the perfect time to go look for odes. I didn’t see any when I first arrived, but once I crossed Confederation Bridge and reached a sunny clearing I saw a couple patrolling the edges of the sunny glade. The first one landed, a female with the brown eyes of a freshly emerged baskettail. Although not the male I had hoped for, females can be differentiated by the length of the appendages – Spiny Baskettails have long appendages that are close together, while Beaverpond Baskettails have short appendages that are close together (Common Baskettails have short appendages which are widely separated, but also have large dark spots at the base of their hindwings). 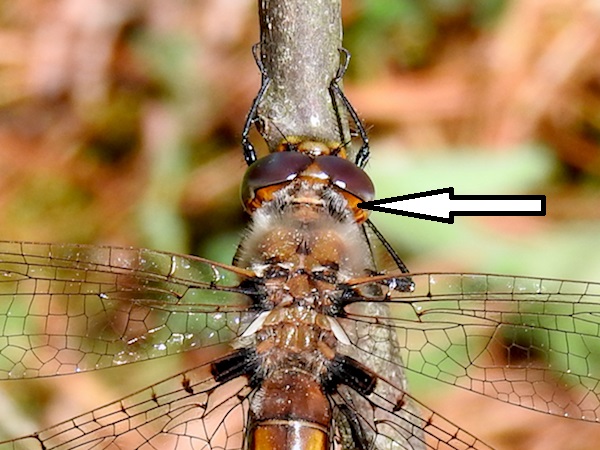 Beaverpond Baskettail – note the yellow colour behind the eyes

The next individual I photographed turned out to be a male. I wasn’t able to get a side view showing the claspers angled downward; here they appear to be angled slightly outward.

Many of the baskettails refused to land, so I continued on my way deeper into the conservation forest. Eventually I came across my second emerald species of the day, an American Emerald. These emeralds lack the yellow spots along the length of the abdomen; it is completely black, with a white ring between the second and third segments. It is the only dragonfly with this white ring and an unmarked bronze-and-green thorax, making it easy to identify. I usually don’t see these dragonflies in swarms the way I see the baskettails; indeed, this was only one of two individuals I found. They tend to perch more often than other emeralds, making them easy to photograph if you do come across one.

Other baskettails would perch, too, if I watched them long enough. This male landed in front of a wild strawberry flower in bloom.

Another male landing in front of me, showing the yellow colour behind the eyes:

Finally I managed to track a male down and get a nice shot from the side. Here you can see the claspers bend sharply downward at the tip:

I did see a few dragonflies other than emeralds; the freshly emerged whitefaces didn’t land close enough for me to get photos or identify them (Frosted Whiteface, Belted Whiteface, and Dot-tailed Whiteface are all found here), and I saw a few fresh Chalk-fronted Corporals. These dragonflies are black and white when mature, and are a pinkish-brown just after emerging – the colour makes me think of chocolate milk.

When I got home and reviewed all my photos I was surprised that they all turned out to be Beaverpond Baskettails – I was hoping both species would be found here. It wasn’t until June 4th that I found my first Spiny Baskettail at Steeplehill Park on a lunchtime walk (I had thought this spot might be good for odes and butterflies, and there were lots of baskettails flying high in the air). It was a female, with the long appendages and black behind the eyes.

That weekend I went to the Beaver Trail at Stony Swamp with my net to see if I could find both baskettails. I had better luck in the little meadow there, catching one male of each species as well as a female Beaverpond Baskettail. The males were both mature, with the bluish-coloured eyes common in this family.

Baskettails are just as much a sign of spring as the white trilliums in the woods and first Northern Spring Azures on the wing and the first songs of the Common Yellowthroats in the marsh. They are a sign of the warmer weather on its way and the dragonfly season yet to come. But as with most dragonflies, the Spiny and Beaverpond Baskettail season is fairly short in our region (they are on the wing until about mid-June, while Prince and Common Baskettails fly much later into the summer), so you will have get out and see them while they are around!