The Richmond Sewage Lagoons (formally known as the Richmond Conservation Area) is one of the few places in Ottawa that did not close its parking lots during the COVID-19 pandemic, and as such, it is one of the few birding spots I visited regularly during the months of April and May. The habitat is unique: there are three cells left from the former sewage lagoons, each containing its own mini-ecosystem. The first cell as one approaches from the parking lot on Eagleson (the southernmost cell), has deep water and extensive cattails, making it great for Pied-billed Grebes, rails, bitterns, Swamp Sparrows and waterfowl, mainly geese and dabbling ducks. The middle cell has deeper water and very little cattails, making it a better spot to see diving ducks. The third cell used to be almost entirely choked with cattails interspersed with small patches of open water, making it the best spot to watch and listen for rails. This spring when I arrived on my first visit I was dismayed to see that not only had the cattails been chopped down, but so had some of the tall trees bordering the cell. The cell looked like a soup of water and what was left of the churned up marsh bottom and vegetation, although a deep puddle ringed with a few cattails remained.

In addition to the three ponds, the open field habitat surrounding the ponds makes it a good spot for birds such as Eastern Kingbirds, Bobolinks, Savannah Sparrows, and other birds that prefer scrubby growth beneath open skies. There are a couple of small woodlots, notably just off the parking lot and between the three cells and the slow-moving Jock River to the west. These are a great spot for songbirds during migration; the warblers that stopped here last here last spring were phenomenal. The river itself is home to Wood Ducks, and it is here where I usually get my Rusty Blackbirds for the year during migration.

I got my Rusty Blackbird for my 2020 year list here back at the end of April. When I visited again on May 10th, I was surprised to find a couple still present. I heard one calling along the river, while a second was singing in the tangles of a thick shrub right next to the path that wound its way around the third cell. I spent some time peering into the thicket to get some photos; eventually he stopped singing, flew down into the third cell and began to forage there.

I was surprised to hear three different Rose-breasted Grosbeaks singing that day, as it seemed a bit early for them to be back; this was one of four year birds I got at the Richmond Lagoons that day. The others were Common Gallinule, which I heard only, and Cedar Waxwing, which I normally find in places like Mud Lake or Old Quarry Trail where they feed on the remaining Mountain Ash berries and crabapples over the winter – I just never managed to connect with any earlier this year. It was a relief to finally remove it from my eBird “year needs” list!

The last bird was a bit more unexpected, although I had known it was there for at least the past two days – a Wilson’s Phalarope. By the time I found it the clouds had moved in, dulling the beautiful gray and rusty colours.

One Killdeer and several yellowlegs of both species were also picking their way through the muck. Although the removal of the vegetation had made the third cell uninhabitable for the rails and bitterns that used to lurk within the depths of the cattails, it now seemed to be attracting various shorebirds – not an entirely bad trade-off.

My next visit there four days later, on May 14th, was sunnier and birdier with 44 species observed (including nine year birds). One of the first birds I saw was a beautiful Common Gallinule out in the open in the first cell:

A male Northern Shoveler was present, as was a mother mallard with eight ducklings. A Dunlin had joined the shorebirds in the third cell (though the Wilson’s Phalarope was absent); this was one of my nine year birds. Others included Gray Catbird, Baltimore Oriole, a Virginia Rail hanging out in the deep, cattail-ringed pond in that cell, a Wood Thrush singing in the woods near the river, and three warblers: Common Yellowthroat, American Redstart and Yellow Warbler. Not new for the year were Warbling and Blue-headed Vireos, Brown Thrasher, four Palm Warblers foraging in a group near the parking lot, several Yellow-rumped Warblers, one Black-and-white Warbler, and four Rose-breasted Grosbeaks – including a male and female foraging on the gravel path ahead of me. They flew up into a tree right next to the trail, and I got a decent photo of the gorgeous male. Spring migration was finally heating up!

I didn’t return again the end of the month, on May 29th. It was another good visit, although it seemed that many of the migrants had moved on, leaving only the resident breeding species. The only new year bird on that date was a Green Heron which I heard calling near the third cell. However, I was happy to hear a Veery, a couple of Alder Flycatchers, a couple of Eastern Wood-pewees, and one Great-crested Flycatcher. A single Cedar Waxwing was sitting in the lovely early morning sunshine, and I couldn’t refuse to take its photo. 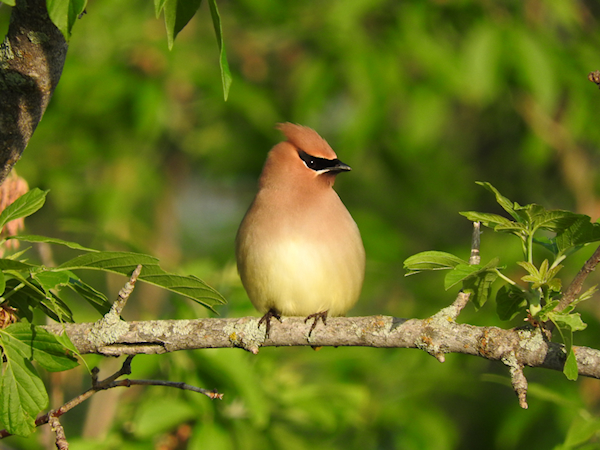 A Common Yellowthroat was singing right out in the open a little further along; it appeared to be in the same thicket where I had seen the Rusty Blackbird a few weeks earlier.

Best of all, two rail species were openly walking on the mat of vegetation in the third cell near the deep pool of water. I was watching for shorebirds and was delighted when one “shorebird” picking its way along the marsh bottom turned out to be Sora, a species that is usually difficult to see in its breeding territory. They like to hide in dense, reed-filled marshes where the only sign of them is usually a descending high-pitched whinny or distinctive, whistled “ker-WEEE!” call coming from within the vegetation. 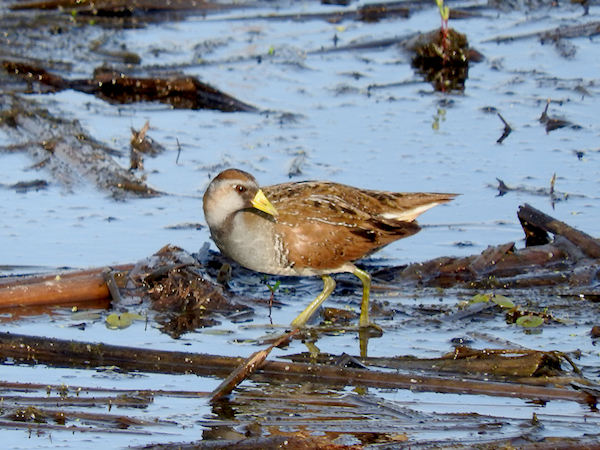 As I watched, a second Sora began walking toward the first. I thought they might have been a family group, but one chased the other back into the watery pond.

While I was watching the Sora, movement at the edge of the cattails caught my attention. I saw one Virginia Rail creeping along the edge of the water; then a second one emerged from the reeds and followed it! I grabbed a few shots, but the distance and the movement made it difficult. I thought this one showing the two in identical poses was pretty neat!

The Richmond Conservation Area is a great place for birds in the warmer months of the year; it is home to a lot of fantastic summer breeding species and attracts plenty of others during migration. It’s pretty good for dragonflies too, particularly spreadwings, although by the time they I start looking for them in early July the toxic Wild Parsnip has started to take over some of the paths. I accidentally brushed my hand against one plant last summer, and got a mild burn; it didn’t feel any worse than brushing against a hot iron, and the discomfort didn’t last more than a few hours. Still, the amount of parsnip that grows there is a concern, particularly on the narrower trails that often become overgrown in mid-summer.

With the pandemic limiting the number of trails the public could access, I really enjoyed my visits there this past spring, and was happy to see as many species as I did!