It’s been a surprisingly good month for butterflies at the Eagleson storm water ponds. The highlight, of course, was the American Snout seen there on August 11th, but in addition to that particular rarity I’ve seen members from all five butterfly families – not a difficult achievement over the course of a month, but one that is almost impossible to do in a single outing. Swallowtails are large butterflies with long tails, and their wings are mainly yellow and black with iridescent spots of blue and orange. The whites and sulphurs in our area are medium-sized butterflies with either yellow or white wings, most of which perch with their wings closed. The gossamer-winged butterflies are very small butterflies that also perch with their wings closed, and come in many different colours. The brushfoots are large to medium-sized butterflies with only two functional pairs of legs; they count the most well-known butterfly species among their number, and many are migratory. Skippers are small butterflies mainly dressed in orange or brown, and many species hold their forewings and hindwings at two different angles, giving them a characteristic “fighter jet” appearance.

END_OF_DOCUMENT_TOKEN_TO_BE_REPLACED 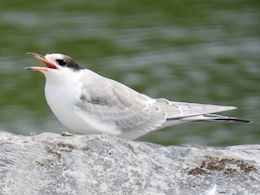 Although the months of June and July are traditionally considered the breeding season in the Northern Hemisphere, it often lasts well into August in our region. Some species, such as the American Goldfinch and Cedar Waxwing, are late nesters, and time their breeding season with the abundance of seeds and fruit later in the summer. Other species have multiple broods during the course of the season, such as American Robins, Eastern Phoebes, Song Sparrows, and Mourning Doves. August, however, is typically a slow month in the birding world, and while some people characterize the early weeks of the month as the “doldrums”, relieved only by the arrival of the first migrants toward the end of the month, I still enjoy getting out and seeing the young birds following their parents around and listening to those species that are still singing this time of year.

END_OF_DOCUMENT_TOKEN_TO_BE_REPLACED

The American Bittern is a relatively common inhabitant of cattail marshes, but you would never guess it from its secretive nature and remarkably cryptic camouflage. Streaked in various shades of brown ranging from chestnut to cinnamon, with patches of white and beige on its underside, this bird blends into the dry, dead reeds and grasses of early spring. It is less flamboyant than the grayish-blue and white of the Great Blue Heron or the dazzling white of the Great Egret, and does not hunt out in the open the way these two relatives do. If I’m lucky I might catch a glimpse of one flying over a marsh, or – rarely – see one in the reeds at the edge of the open water. Most of the time I find them in the spring when they give their characteristic throaty, gulping “oonk-ka-choonk” calls from deep within the cattails. These iconic calls have led to the bittern receiving some unusual nicknames including “stake-driver,” “thunder-pumper,” and “water-belcher.”

END_OF_DOCUMENT_TOKEN_TO_BE_REPLACED 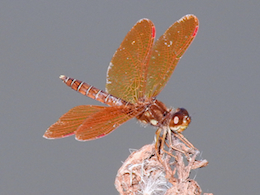 August isn’t my favourite month to go dragon-hunting; in our region, a number of species have already vanished for the year, including several of my favourite clubtails and emeralds, cruisers and spiketails. August, then, is a season of skimmers and darners, and as such, places like the Eagleson storm water ponds are good places to go dragon-hunting, as these are the most common families of dragonflies that breed here (of the other families mentioned above, only the emeralds are present, and only members of the genus Epitheca, the baskettails). I’ve spent much of my free time this month at the storm water ponds, not just looking for butterflies, but also for new species of odes. It was only two years ago that I discovered new populations of Eastern Amberwings and Saffron-winged Meadowhawks breeding here, and as a number of common species are still scarce or still missing, it is worth checking to see if any have made their way here yet. For a habitat that is quite similar to that of Mud Lake or the ponds at Andrew Haydon Park, it is curious to me that there are no Powdered Dancers, no Horned or Lancet Clubtails, no Halloween or Calico Pennants, no Blue Dashers, and very few Widow Skimmers, Dot-tailed Whitefaces, Eastern Pondhawks, and Common Whitetails. Even spreadwings and dragonflies as abundant as the Autumn Meadowhawk are difficult to find. This is why it is such a surprise that uncommon species such as Eastern Amberwing and Saffron-winged Meadowhawk have become quite common here in late summer.

END_OF_DOCUMENT_TOKEN_TO_BE_REPLACED 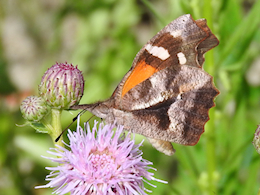 The American Snout is a rare-to-uncommon butterfly in Ontario which, like the Monarch butterfly, breeds here but is unable to survive the winter. It is a tropical butterfly, found as far south as Argentina, and its permanent range reaches only as far north as the southern United States. However, it is strongly migratory, and southern populations in the U.S. undertake large-scale migrations through most of the eastern United States and into southern Canada each breeding season. It is found regularly in the Carolinian Zone of southwestern Ontario, with strays reaching as far north as Algonquin Park, Manitoulin Island and Ottawa, where it was found each year at the Fletcher Wildlife Garden in the years between 2008 and 2012. I never went to see them there, and thought if I ever wanted to add this species to my life list I would have to look for this butterfly in southern Ontario.

END_OF_DOCUMENT_TOKEN_TO_BE_REPLACED 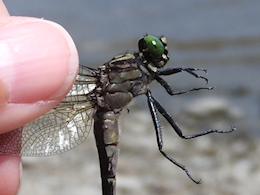 On July 22nd I received an email from Chris Lewis about a new dragonfly spot along the Ottawa River. I’d been to Shelia McKee Park out near Dunrobin just once, on an OFNC trip in 2015 to look for herps; it has a network of woodland trails and a steep staircase that leads down from the top of the cliff to the rocky beach at the bottom. Chris said she found evidence of a very recent dragonfly emergence of in the form of both exuviae and teneral dragonflies; she recognized exuviae of both clubtails and emeralds, though she was not able to identify them to species. She saw an unidentified darner and several teneral meadowhawks in the woods, and several Powdered Dancers and a pair of Stream Bluets in tandem near the water. However, it was her clubtail report that intrigued me: she mentioned one Lancet Clubtail, both mature and teneral Black-shouldered Spinylegs, several Midland Clubtails, and one Cobra Clubtail which had become the unfortunate meal of a Midland Clubtail. It is amazing that I’ve never considered going back to this park for odes before – the shoreline here is quite rocky, with little or no emergent vegetation, reminiscent of Britannia Point at Mud Lake or the causeway at Morris Island, both of which are great spots for clubtails. Curious to see these clubtails for myself, I headed out the following Sunday (July 28th) and brought my net in case there was anything worth catching.