Usually by the time the Victoria Day long weekend arrives the first odes have emerged – in the past I’ve seen baskettails in large numbers at Mud Lake and whitefaces and emeralds in Stony Swamp. This year has been different. A persistent wind from the north has prevented the daytime temperatures from rising much above 20°C; nighttime temperatures are still in the single digits. As dragonfly emergence depends largely on water temperature, it isn’t surprising that I had only seen one dragonfly before the May long weekend, a Common Green Darner at Parliament Hill on May 6th. This is usually one of the first species I see, as they migrate north from the warm south where they emerge. Temperatures had risen from 10°C on May 3rd to 20°C on the 6th, although the morning had started out as a chilly 5°C – perhaps an influx of warm air brought this gorgeous dragonfly up from somewhere where the north wind and flooding weren’t wreaking havoc on the wildlife.

When the forecast finally called for sun and temperatures above 20°C on the Sunday of the long weekend, I met up with my friends Chris T. and Lorraine at Roger’s Pond in Marlborough Forest for an afternoon of dragonfly-hunting. Unfortunately, the gorgeous late spring forecast didn’t prepare me for the one condition that is least conducive to dragon-hunting: wind. It also didn’t prepare me for how few odes we would see. Although it was late in the month (May 26th), as we walked from the parking lot through the woods I saw only a few bluets in the vegetation, most of which were the colourless brown of freshly emerged damselflies. I didn’t bother examining or catching them as the bright black and blue mature bluets are difficult enough as it is – trying to identify these damselflies when their colour patterns are barely visible is not a fun exercise, especially as I was wary of handling them with their shiny Saran-wrap wings.

Out in the open we started seeing a few dragonflies, but nowhere near the number we’d had in seasons past. Most were tenerals, and I saw a few baskettails and Chalk-fronted Emeralds that looked as though they had emerged only just the day before. This female baskettail had all her colours, though her eyes were still brown instead of blue.

Based on the length of the terminal appendages, which look short, I am guessing this is a Beaverpond Baskettail – Spiny Baskettails have longer terminal appendages. The sure way of identifying her would be to catch her and look at the shape of the genital plates on the underside of her abdomen, but I didn’t want to risk it. 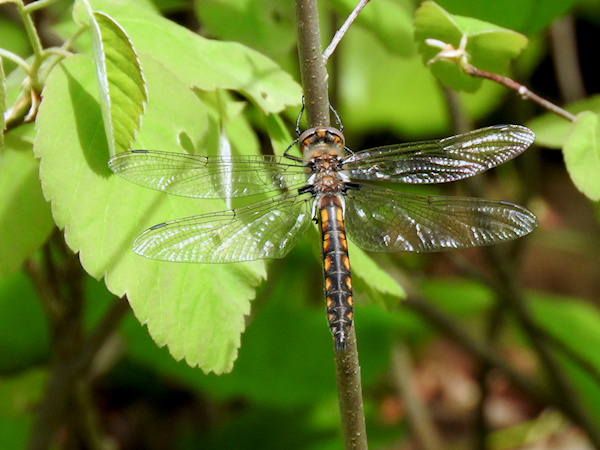 Chris found the most interesting dragonfly of the day – an Ebony Boghaunter which was resting on the gravel trail and flew off before I could get my camera to focus on it. Still, it was great to see this species here again, confirming that they do still breed somewhere close by.

A hover fly resting on the ground also caught my attention; I wasn’t able to identify it to species, as the genus Lejops is complicated. Still, it was nice to see my first hover fly of the season, especially as it wasn’t a Narrow-headed Sun Fly (Helophilus fasciatus) which is usually my first flower fly of the season. I tried to lean in close for sharp, detailed macro photo but it, too flew off quickly.

We checked out the dump area to see if there were any salamanders beneath the old mattress, but it had disintegrated too badly to move. We walked from there to the pond, spying a pair of Northern Water Snakes swimming in the water below the bridge. A Yellow-rumped Warbler was singing, and four male Ring-necked Ducks were swimming on the pond. The only unusual species we heard was a Magnolia Warbler singing its snappy song. We found no odes at the wooden bridge at the stream, but we did add an American Emerald to the day’s list in one of the sunlit openings.

On our way back to the car we spent more time along the shore of the lake watching for teneral and emerging odes. We found a few, though nowhere near the great numbers I was expecting. This one might be a Chalk-fronted Corporal based on the colour and wide, skimmer-like hindwings; it normally takes a few hours after emergence for the dragonfly to pump the hemolymph through its circulatory system, for its wings and body to harden enough to be able to fly, and for its mature colours to develop. That this individual’s wings haven’t spread out to their customary 90° angle suggests this fellow has some time to go before it will be ready to fly.

We spent about two and a half hours looking for odes, and were a bit disappointed that our first dragonfly outing of the season fell short of our expectations with so few species (no clubtails!) and so few individuals seen – given what I saw, I do think that they had only started emerging a day or two before. The continuing cool weather in April and May had not only delayed bird migration, it seems, but also odonate emergence. We hoped it would warm up quickly and that the dragonflies would soon be ready to burst forth from their watery nursery to fill the air with the sparkle of their wings.

Lorraine and I tried again to find some odes at Roger’s Pond a few weeks later, on June 9th. Once again the pickings were slim, with mostly Chalk-fronted Corporals, a few baskettails, and a few Four-spotted Skimmers to be found. We’d finally gotten some nice weather in the high twenties, but the delayed onset of the season seemed to be continuing even into June. This Dusky Clubtail was our best find of the day; normally one of our duller clubtails, its sharp black-and-yellow colours indicate it hasn’t been flying for very long.

It was great to see the Four-spotted Skimmers – their warm golden colours make this one of my favourite skimmers. 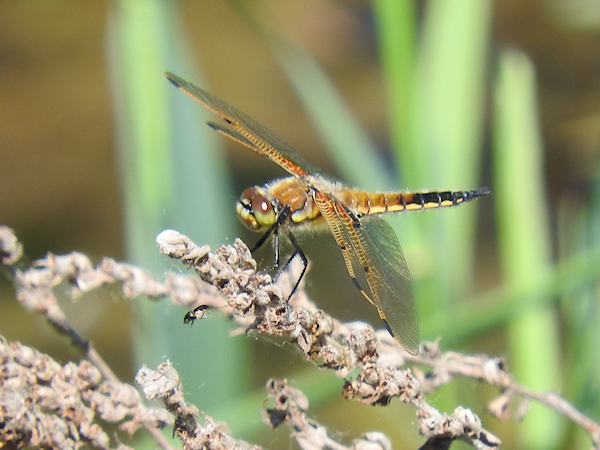 A few bluets were seen, but I left them all unidentified. It was strange to see no Taiga Bluets, as these are one of the first damselflies of the spring. There were no Aurora Damsels along the trail or Ebony Jewelwings at the wooden bridge – we had hoped that the dragonflies would catch up with the warmer weather, but it seems we will have to wait to see the species that are normally flying by now.

The birds kept things interesting, however, with a Winter Wren seen scurrying on the ground near the wooden bridge, an Eastern Towhee heard across from the metal bridge singing its characteristic “to-whee” call, a Blue-headed Vireo singing in the woods, and a Wilson’s Snipe keening across the pond. Two male Ring-necked Ducks were still present on the pond, and we saw a pair of Pied-billed Grebes and heard a Virginia Rail grunting. For butterflies, we saw two skipper species – Northern Cloudywing and Juvenal’s Duskywing – as well as a worn butterfly that looked like an Eastern Comma. Fringed Polygala was blooming in the woods; also known as “gaywings”, the soft pink flowers were a cheerful sight in the sun.

Although Roger’s Pond is usually the first place I go looking for odes in the spring, this year it has been disappointing. It seems that it took forever for winter to leave, then forever for the birds to arrive, and now it’s taking forever for the dragonflies to start flying! Maybe one day soon we’ll start to see good numbers of odes on the wing – nature is resilient, and there’s still lots of time left this summer to enjoy watching these wonderful creatures.

2 thoughts on “The Beginning of Dragonfly Season”