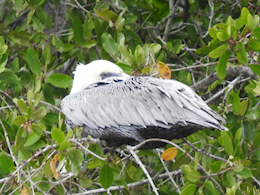 On Wednesday Doran and I took part in an excursion to Catalina Island. Our pick-up time wasn’t until 8:20 am so we had some time to kill after breakfast, and I immediately suggested walking up to the security gate again to check out the swamp. We saw the usual White-cheeked Pintails in the pool again, as well as three more in the swamp. Antillean Palm-swifts were flitting through the air, and large flocks of white egrets were flying toward the coast – I couldn’t tell if they were Snowy Egrets or Great Egrets, but it was amazing to see so many. There were probably between 15 and 30 in each flock, with at least four or five flocks flying over.

In the swamp itself I saw one Great Egret, a few Snowy Egrets and a Tricolored Heron close to the road – this is a species I’ve seen before in Mexico and Florida, but I was happy to see it again as I love the dark blue feathers against the yellow lores and bill and the white and rusty red pattern of its throat and neck. A Common Gallinule was calling from within the swamp itself and a Great Blue Heron flew over.

As this excursion was sanctioned by Occidental, the bus was able to pick us up inside the resort by the front lobby. Only six of us got on the bus to Catalina Island – us and two couples from Pennsylvania, who, upon hearing that we were from Canada, immediately apologized for their president. However, we also had to stop at two more Occidental resorts before we got on our way, and the bus filled up quickly. I was secretly relieved to see some older folks on the bus as well – given that alcohol seemed to be one of the selling points of the tour, I was afraid that we were going to be out-numbered by young twenty-somethings looking to party. Our excursion included snorkeling at Catalina Island, followed by lunch on the beach and a tour up the Chavon River on a Mississippi-style river boat with drinks available throughout.

Chavon River from the highway 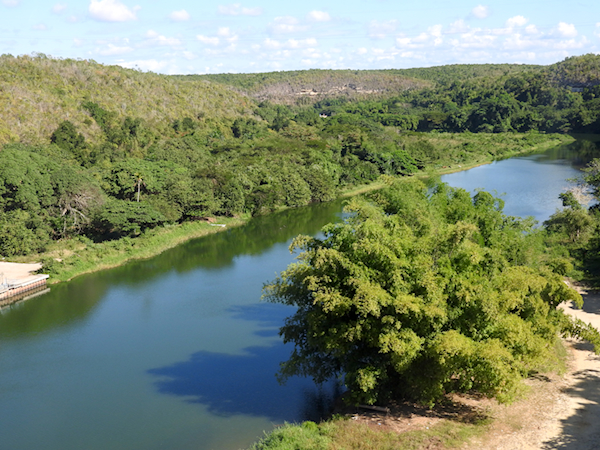 Chavon River from the highway

During the drive to the dock the tour guide filled us in on some of the culture and history the Dominican Republic. Much of which he told us was similar to what Manny told us, and as he spoke in three languages (French, Spanish and English) I tuned him out. We followed the same route to Bayahibe that Manny took us on, passing through the same toll stations and seeing the same sugar cane fields and distant mountain ranges. The bus passed Bayahibe, and then turned into Caso de Campa, an exclusive area full of villas belonging to the rich and famous. The road was narrow, with traffic circles almost too small for the bus. Eventually we made it to the docks where we were ushered off the bus and onto a motorized catamaran (which the tour guide called a “moto-maran”). We were asked to remove our shoes, then the boat moved off and the music started and we were underway!

The journey to the island was pleasant, though there weren’t too many birds around. I saw what might have been a Ruddy Turnstone on the rocky shoreline before we left the small harbor, as well as a couple of Magnificent Frigatebirds. Closer to the island we saw some terns, though I wasn’t able to discern any field marks. The music was too loud to talk over, so Doran and I sat and enjoyed the ride. Once we reached the island we didn’t do any snorkeling, as I had never done it before and the boat stopped a good way out from the shore – I was hoping we would be able to wade in from the shore until we felt comfortable. Instead people were jumping out into the deep water. I was also concerned because I wear glasses and wasn’t sure how much I’d be able to see without them (I later learned from another eyeglass-wearer that it wasn’t much!). Fortunately the snorkeling didn’t take up too much time, and once everyone climbed back on board the moto-maran began chugging along to the western shore where lunch was being cooked on the beach.

The beach was very narrow, with dense vegetation growing behind it. I saw a Greater Antillean Grackle and several Antillean Palm-swifts. Doran found himself a lounge chair and settled in, while I took a walk along the vegetation to see if anything interesting was lurking there. I saw a small blue butterfly, but wasn’t able to photograph it. However, the fruit growing there looked pretty. 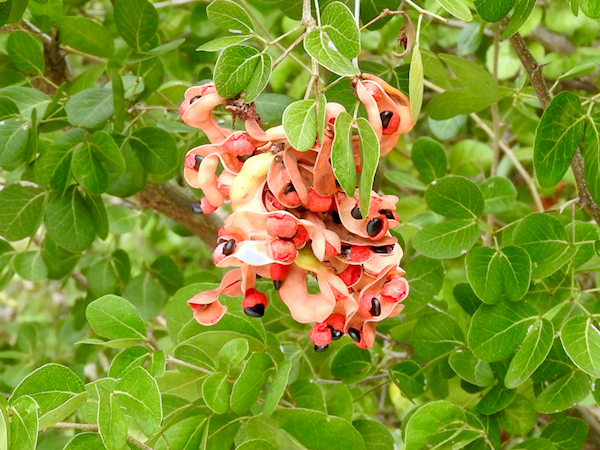 Lunch – a delicious barbeque of rice, chicken, lobster, and more – was served shortly after, and Doran and I found ourselves talking with an older couple from Texas. We had a really fun conversation, despite both Doran and me knocking our drinks over – we then realized that the boards of the picnic table beneath the table cloth were uneven with large gaps between them. At one point I heard a vireo singing in the trees next to where we were sitting and saw a Black-whiskered Vireo singing right out in the open! Of course I didn’t have my camera at the time and lost the chance to photograph it. I was super thrilled to get a good look at this species which eluded Manny and me in the National Park of the East.

After lunch Gail and I went wading in the water while Doran continued to lounge in the shade. There were a few waves, and the sea bottom dropped off sharply after only a few feet, so we didn’t go in very far. The water was refreshing after walking on the hot sand in bare feet!

We got to spend an hour on the beach before it was time to head back to the moto-maran and the mainland. We arrived at the same dock and immediately disembarked and climbed up onto the Mississippi-style river boat for a slow cruise up the Chavon River. Doran and I sat on the top floor with the group from Pennsylvania where we watched the shore drift by while drinking champagne. We saw more birds on the river than we did on the open sea – before we even entered the river channel we saw four Brown Pelicans roosting in trees and two more floating on the water. An Osprey was also sitting in a tree near the mouth of the river. 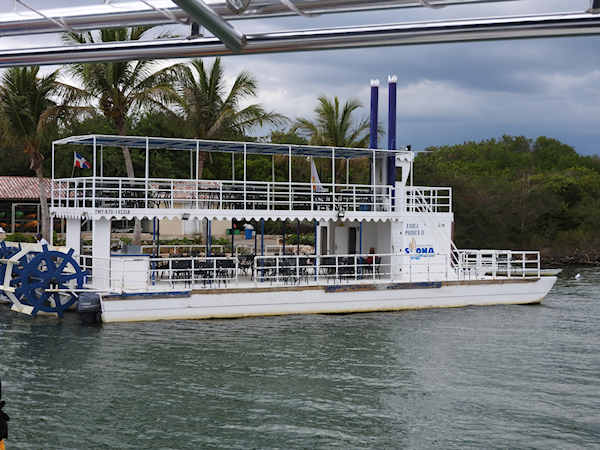 I saw a Spotted Sandpiper fly across the water, identified by its stiff-winged flight, several Turkey Vultures soaring above the water, and four large cross-shaped black birds that could only be anis. Since the Smooth-billed Ani is the only ani species in the Dominican Republic this was a lifer for me! The boat also scared a few herons near the water’s edge including two adult Yellow-crowned Night-herons, a Snowy Egret, a Great Blue Heron, and my second lifer of the afternoon, a Little Blue Heron! This was the only heron species that occurs in the ABA area (i.e. North America north of Mexico) that I hadn’t seen so I was happy to finally add it to my life list! I would have liked to have gotten some photos of it but clouds were moving in and the boat was moving too fast. My photo of the Yellow-crowned Night Heron didn’t turn out too bad. 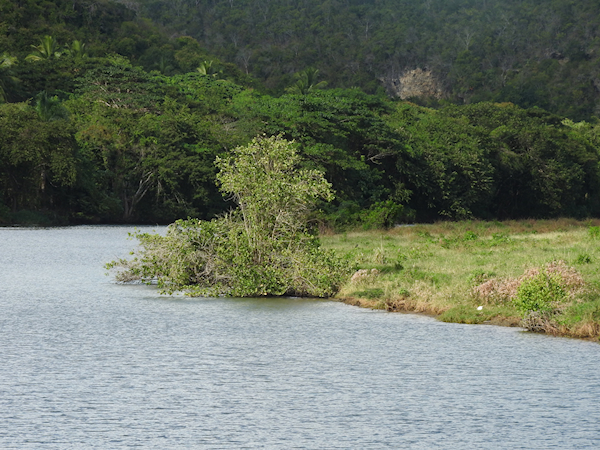 Chavon River from the boat

There were a few fishermen on the river, and all along the shore I spotted some neat crabs with white-tipped reddish legs and claws sitting on the rocks near the water’s edge – I tried several times to photograph them but the darkening skies resulted in some lousy motion-blurred photos. I suspect they may be Gecarcinus lateralis, aka Blackback Land Crab, Bermuda Land Crab, or Red Land Crab.

Both Doran and I felt that the riverboat tour was the best part of the excursion, and that it was too short to really enjoy – we didn’t even make it to the bridge where the highway crosses over the river before the boat turned around to take us back to the dock. We would love to return and take one of the specialized excursions that explores not only the river, but the surrounding tropical jungle.

Altogether it was a fun day, for what initially seemed like a “party boat” excursion. I am really happy we got to see some more of the country and enjoy the sights, the food, the music, and the culture that the excursion had to offer!