The August long weekend is here, and it’s been brutally hot and humid. Temperatures have reached as high as 32°C with a humidex of 41. It didn’t feel quite so hot yesterday, but today was awful. The sun was relentless, and there was no cooling breeze to provide relief. Being in the shade helped, but even so, I didn’t feel like staying out for very long.

We haven’t had much rain in the last month, so the water levels of the Ottawa River have dropped and mudflats are developing in Shirley’s Bay and Ottawa Beach. I wanted to look for shorebirds, but Shirley’s Bay didn’t sound too appealing – a long mosquito-infested walk through the woods to get to the dyke, which is almost completely open to the baking sun – all the while carrying a scope that sometimes feels like it weighs as much as I do. So yesterday I drove over to Andrew Haydon Park instead.

The only shorebirds I found at the mouth of the creek at the western end of the park were a couple of Killdeer. The usual Great Egret was out on the mudflats, and a couple of Wood Ducks were resting on logs in the shallow water.

A group of birds in the trees behind the bandshell caught my attention. There I saw a Cape May Warbler and at least two Yellow Warblers flitting about looking for bugs. A pair of Eastern Phoebes were hunting out in the open, including this young bird which was initially perching right above my head.

I found a second pair of phoebes in the area near the island where I found the blue frog a few weeks ago. I initially stopped to look for the frog, then noticed one of the phoebes perching on a cluster of folded-over cattails. A second one was perching on a tree branch close to where I was standing, and immediately decided it wanted the cattail perch for itself. It chased the other phoebe away, though the first eventually came back to try to re-take the perch – they must have had good luck finding food there, for when not chasing each other they would hover above the water and pick something off the surface to eat.

There were no dragonflies perching in the cattails this time, but I did find a couple further along the shore. A Blue Dasher kept chasing a male Eastern Pondhawk around the area before landing on its preferred perch.

The male was too far out on the lily pads to photograph, so I was happy when I found this female in the vegetation near the bridge.

I left the park shortly after that, as it was getting hot and there wasn’t much reason to stay with few dragonflies around and fewer shorebirds.

This morning I got out early and headed over to Jack Pine Trail. I wasn’t expecting the same number of post-breeding migrants in the woods that had shown up at Mud Lake on Friday, but I did hear a Gray Catbird and Rose-breasted Grosbeak, two species I usually only see in late August. There were a number of breeding birds still around, including Field and White-throated Sparrows, one Swamp Sparrow vocalizing in the marsh, a male Eastern Towhee singing out in the open, a House Wren, and this juvenile Common Yellowthroat. 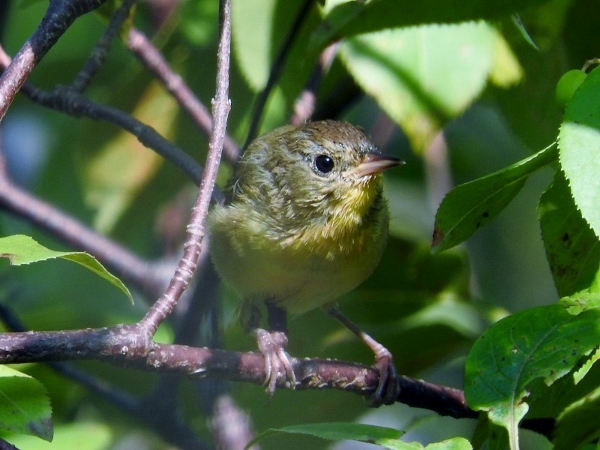 One Alder Flycatcher, four Eastern Wood-pewees and a couple of Red-eyed Vireos were also still singing. The Ovenbirds were silent, and theirs is one of the first songs whose absence I notice in the late summer.

I was surprised to see a new bench at the back of the trail where the unofficial fourth loops breaks off towards Highway 416. This trail leads over the small stream where we used to see Arrowhead Spiketails as well as other good dragonflies, such as the single jewelwing and clubtail I’d found last summer. The trail looked overgrown, and once I got to the open meadow I began seeing the yellow flowers of Wild Parsnip growing profusely along the trail. The sap of this plant can burn if it comes into contact with your skin, so I chose not to continue down the trail and turned around. Perhaps blocking off the trail is the NCC’s way of dealing with this highly invasive, toxic plant here in the Greenbelt.

Before I rejoined the trail, however, I found my best butterfly of the day – a beautifully fresh Monarch nectaring on Joe Pye Weed next to the creek. There were a few other small insects buzzing around, but no odonates.

I also found some pretty pink flowers nearby – iNaturalist tells me they are known as Great Willowherb, a non-native plant that “arrived in the region via anthropogenic means”. 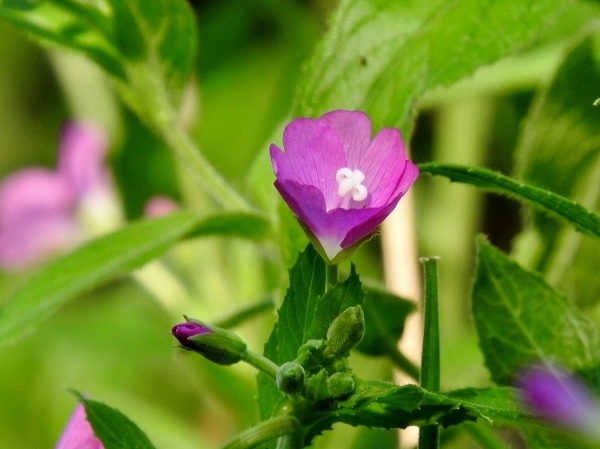 By the time I got to the marsh at the back of the trail I had begun to wonder where all the insects were. Was it too hot for them? I’d seen only a couple of meadowhawks and no large dragonflies anywhere. The only butterflies I saw, other than the Monarch, were a Viceroy and a White Admiral fluttering by. There were no Northern Pearly-eyes in the shaded woods, nor any crescents flitting among the grassy areas of the trail. There were hardly any bees or wasps around, and I was hoping to find another large wasp like the Pigeon Tremex Horntail Wasp I’d seen at Mud Lake on Friday or Red-belted Bumble Bee like the one I’d found at the Eagleson ponds. Scientists say insect populations are declining, and I could well believe it in the sweltering August heat.

I had better luck in the cattail marsh when not one, but two emerald dragonflies deigned to land right in front of me. The first was a large female Williamson’s Emerald – there’s no mistaking that sharp-looking pointed ovipositor near the tip of her abdomen. She landed sideways to me in a spot in the shade, so I began edging along the trail until I could get a picture showing the wings in detail. I was trying to get a head-on top view when she decided to fly off. 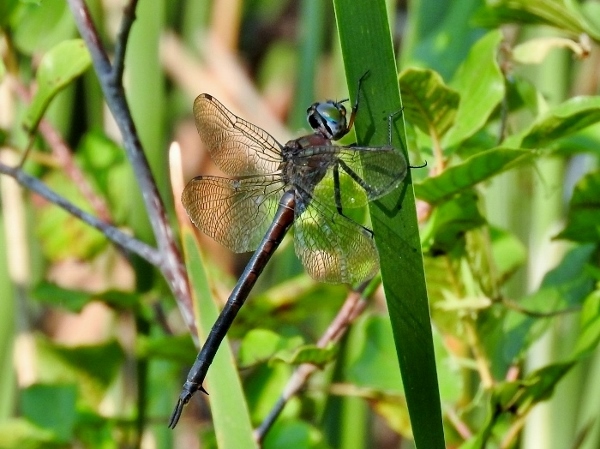 I saw another dragonfly patrolling the same part of the trail, and stopped when I saw it land. At first I thought it was a Racket-tailed Emerald, but a closer look at the one photo I got shows it to be a male Brush-tipped Emerald (just look at those hairy claspers!). These two species are something of a Stony Swamp specialty. They are easier to find in July, and as such I wasn’t expecting to see them here today! 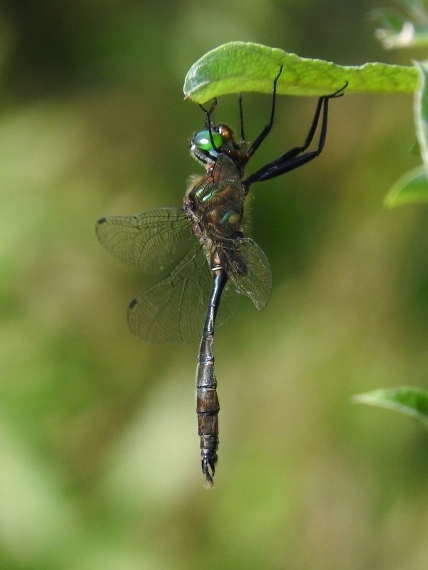 The alvar was more productive for birds than the shaded forest, despite the blistering sun. A juvenile and adult Chipping Sparrow popped into view, and a few sparrows were even singing. Strangely I heard no Song Sparrows – perhaps they had the sense to keep a low profile. I think my eyes were playing tricks on me, for I swear I saw a small falcon perching in a distant tree. I couldn’t tell whether it was a Merlin or a Kestrel, so I edged down a side trail to get closer, using a group of trees to stay hidden from view. When I next saw the bird, it had turned into a Northern Flicker. I walked further and checked the other trees in case the falcon had flown off; whatever I had seen, it was long gone.

My best moment came when a male Eastern Towhee flew into a dead tree and started singing. A tiny House Wren appeared to have issues with the larger sparrow, as it kept bouncing up the bare branches until it was just beneath the towhee. Apparently it lost its nerve and flew away. 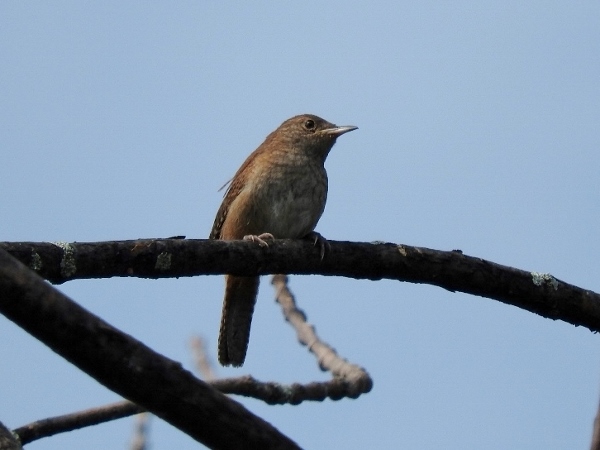 There were no Common Ringlets in the alvar, and hardly any dragonflies. I found another meadowhawk (only about my third one) and perhaps three large dragonflies that were perching in the shrubs and flew off when I got too close. One was a darner, though I wasn’t close enough to identify it, and the other two disappeared before I could get a good look at them. Perhaps they, too, were taking it easy in the heat. It wasn’t until I re-entered the woods that I finally found an insect to photograph, a fresh Common Wood-nymph. These usually show up in good numbers at the Beaver Trail, and smaller numbers elsewhere in Stony Swamp. I was just happy to find something worth photographing. 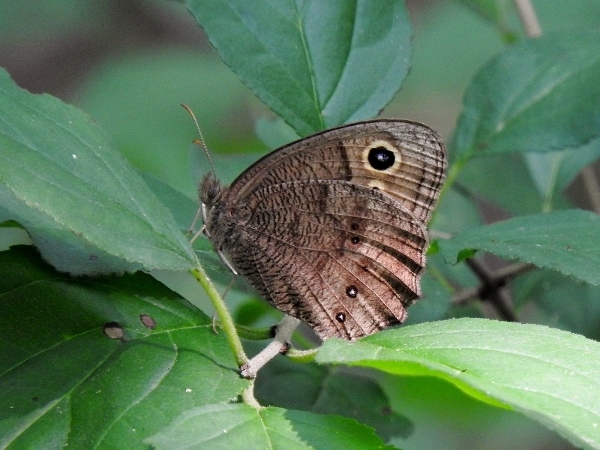 I wanted to head over to the Beaver Trail next to see what was flying around the meadow and the stream at the back, but it was too hot and muggy with the humidity. It’s not too often that I find the humidity too much to bear, but this was one of those days. Still, I was happy with the two emeralds still flying at Jack Pine Trail, and any day where I find a Monarch is a good one!