On May 20th I finished my morning birding and, after having lunch, decided to spend some time working on the garden in the backyard. At one point I happened to glance up and immediately stopped what I was doing when I saw this band of colour etched against the sky. I recognized what it was immediately – a type of ice halo known as a circumhorizontal arc – but I’ve only seen one once, and that was a long time ago. On July 20, 2009 I was at work in a downtown office highrise when I noticed a similar rainbow band in the southern sky outside our 26th floor window. I happened to have my camera with me, and managed to take a few pictures.

This phenomenon is similar to 22° halos and sundogs that are common in winter when the sun is low on the horizon, except the circumhorizontal arc only appears during the mid-summer when the sun is high in the sky and cirrus clouds are present. Tiny hexagon-shaped ice crystals in the atmosphere create halos by refracting or reflecting light. In this case, the hexagonal face of the crystals must be parallel to the ground, while the sun’s rays enter the vertical side of the crystal and exit via the lower horizontal side. The refraction of these rays produces the well-separated colours just as a prism does.

In order for this prism effect to occur, however, the sun must be at least 58° above the horizon. This means that these stunning ice halos are more commonly seen in latitudes close to the equator, and decrease in frequency the further north (or south) one travels due to the shorter amount of time the sun is sufficiently high enough. These charts shows the likelihood of circumhorizontal arcs forming at various cities in the northern hemisphere. In Ottawa – which shares the same latitude as Milan, Italy – circumhorizontal arcs are able to appear between late April and mid-August, with about 480 hours a year when it is possible. 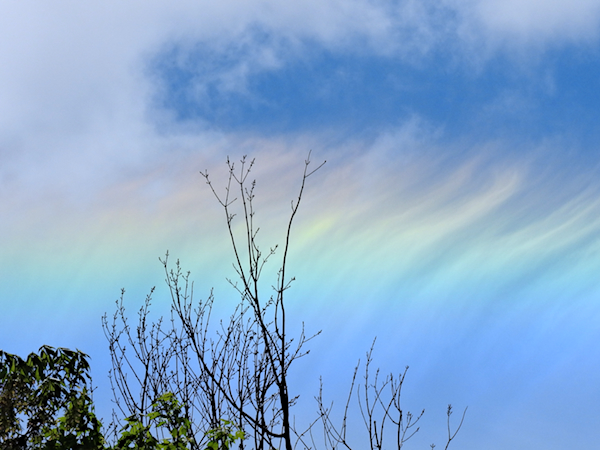 Once I saw the beautiful band of colour I ran into the house to get my camera, then went out onto the street to take some pictures. It didn’t last long, as the cirrus clouds blew away only a few minutes later. Given how short-lived the blaze of colour turned out to be, it’s no wonder that it’s been nine years since I last saw one, and I realized how lucky I was to look up in time to see this one! 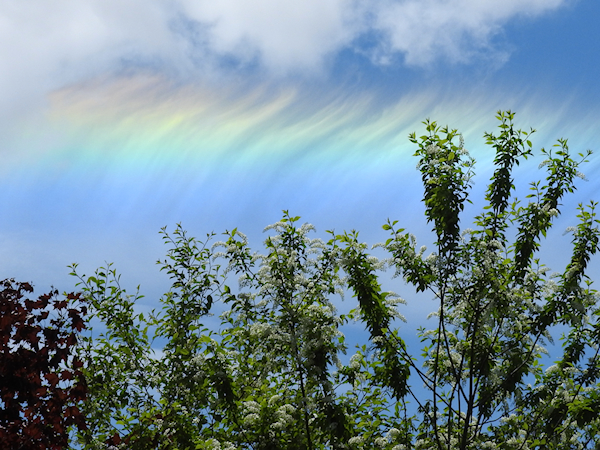