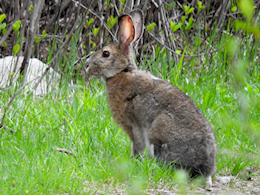 It’s difficult to plan a mammal-watching excursion here in Ottawa. Most of my mammal sightings are random occurrences; they are much more secretive than birds, and do not conveniently give away their location with boisterous song in the summer or quiet chip notes in the non-breeding season. Diurnal mammals such as squirrels and chipmunks are the exception – both are quick to voice their displeasure with or fear of intruders in their territory. However, most other mammals are silent and prefer not to be noticed.

Stony Swamp is home to a large number of mammals, from the tiny Southern Red-backed Vole to the large White-tailed Deer and fierce coyote. By spending a lot of time on the trails – particularly in the evening or first thing in the morning, before it gets fully light or too crowded – you can see many of these mammals over the course of a year, but it’s difficult to tally more than a couple of species in a single outing. I find the Old Quarry Trail is one of the most reliable trails for seeing mammals such as Snowshoe Hare and porcupine, so I decided to spend some time there this morning.

I arrived at 7:00 am, and quickly tallied a large number of warblers: three Ovenbirds singing deep in the woods, three American Redstarts singing along the edges, six Common Yellowthroats in the marshes and open grassy areas, five Black-and-White Warblers scattered in the forest, plus a Nashville Warbler, Magnolia Warbler, two Bay-breasted Warblers foraging together (including a singing male), Chestnut-sided Warbler, Black-throated Blue Warbler, Palm Warbler, Pine Warbler, Black-throated Green Warbler, and a surprise Canada Warbler. At thirteen species, Old Quarry Trail was giving Mud Lake a run for its money!

In the marsh I also heard Swamp Sparrows, a Sora calling, and a Virginia Rail calling. Both male and female Red-winged Blackbirds perched conspicuously on the cattails. 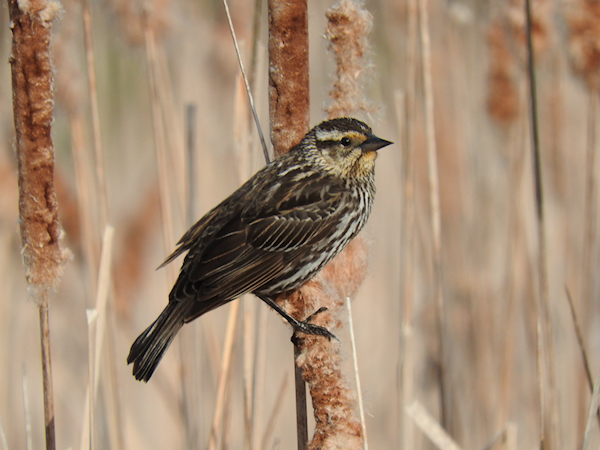 A Veery, two Gray Catbirds, three Eastern Phoebes, a Pine Siskin, a White-crowned Sparrow and a Baltimore Oriole were also good finds on my walk through the different habitats of the conservation area. In the open area south of the forest I came across four Tennessee Warblers foraging among some trees bearing blossoms. They feed on plant nectar as well as insects, and of all the warblers I find that Tennessee Warblers are the most likely ones to be found in trees bearing flowers. 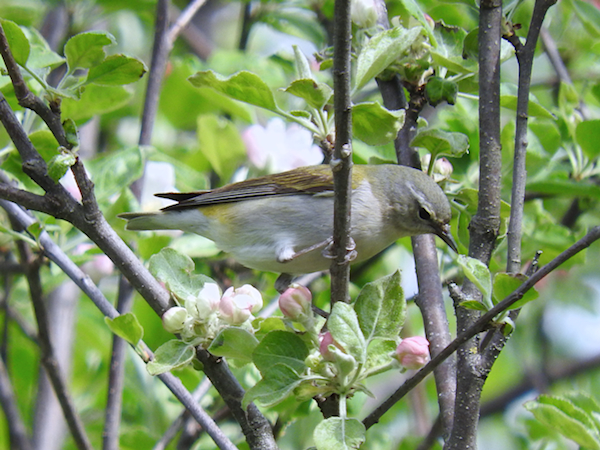 I had even more success with the mammals. White-tailed Deer are more common at Old Quarry Trail than at the other trails in Stony Swamp, but are usually easiest to see first thing in the morning just after food has been put out for them along the side trails. I find they have become less visible in recent years, and wonder if the large number of people of using the trail these days – including an increase in both leashed and unleashed dogs in the woods, where they are not allowed – have resulted in them moving deeper into the bush during the day. 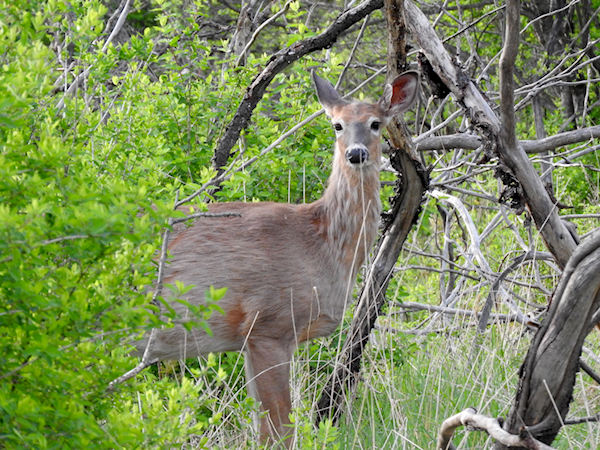 Porcupines are also easier to see here than at other trails. Look for copious amounts of pellets and small branches littering the trail to see where they have feeding most recently; if you look up you may or may not find one.

Old Quarry Trail is my favourite trail for seeing Snowshoe Hares. While I’ve seen them at Jack Pine Trail (though none recently), and while I’ve seen their tracks at almost all of the Stony Swamp trails in the winter time, the Snowshoe Hares themselves are elusive, unless you just happen to be in the right place at the right time. They are most likely to be found first thing in the morning, though I’ve had success later in the morning, too. This is one of three seen on my walk today. 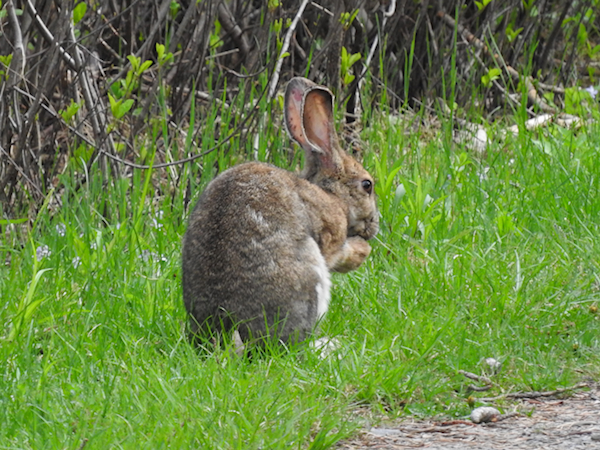 My best find, however, was a wild coyote in the open grassy area south of the woods along the hydro cut. Dogs are allowed in this area, though I wouldn’t recommend allowing them off-leash now that I know that these beasts are present! I heard a crow cawing hoarsely at something, and, thinking there was a hawk perched somewhere, turned to see the coyote trotting through the long grass toward me instead! I immediately stopped and turned my camera on; it veered toward a clump of shrubs and I managed to get one good shot of it when it paused. This is my best coyote photo to date, and I was thrilled to have such a close encounter with one. Most coyotes are wary of humans and will run off as soon as they realize they have been seen – just as this one did. 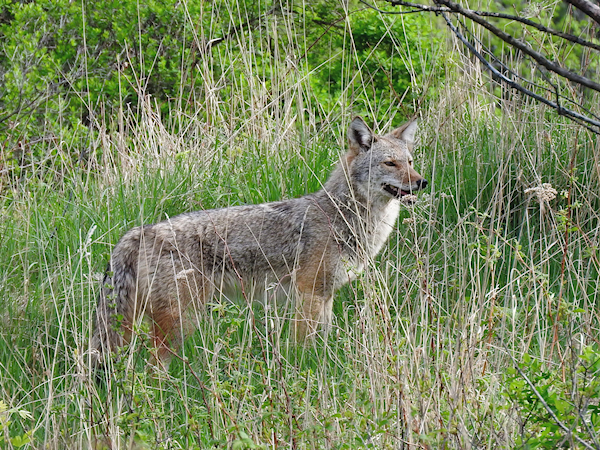 Coyotes – and many other mammal species – are all around us, though they make it difficult to be observed. They are present in the various green spaces around the city, moving through ravines, city parks, conservation areas, and riparian habitats as they look for the mice, voles and rabbits are make up their primary diet. While they are extremely tolerant of development and human activity, they recognize humans as potential enemies and avoid them as much as possible. Some coyotes that live close to humans even change their diurnal schedule to a nocturnal one to avoid coming into conflict with humans. Very rarely do they pose a threat to people (you are more likely to be bit by a dog than a coyote); but small dogs allowed off-leash in natural areas and cats and that are allowed to roam may be at risk, especially when food becomes scarce in the winter.

While many people would prefer to forget that wildlife exists all around us, I am thrilled with every animal I encounter, and enjoy seeing them going about their lives. Every species has its part to play in the ecosystem and its role in the food web, and I think life would quickly become very boring without these chance encounters.