The following day was gorgeous, so I hit a few hotspots before returning to the Rideau Trail to continue my quest for the first butterflies of the year. My day started with a junco visiting my backyard for food, and a baby chickadee in our front tree emitting begging noises while fluttering its wings at the adult searching the gutters for insects or cached seeds. I had a Tree Swallow and a flyover Killdeer at Kristina Kiss Park, a drumming Ruffed Grouse and more Dark-eyed Juncos at Old Quarry Trail, and two Snowy Owls sitting on chunks of ice out on the river at Andrew Haydon Park. Only the Eastern Phoebe calling near the western creek made it seem like spring….it was slow to warm up to its alleged high of 15°C.

After finishing up at Andrew Haydon Park I decided to head home for lunch, and go out again once it had warmed up. This proved to be a good decision, as almost right away I found a Garter Snake slithering through the leaf litter at the Rideau Trail!

There still weren’t too many birds around, but I did hear a raven calling as it flew over, as well as a Pine Siskin and a Purple Finch. Three Yellow-bellied Sapsuckers were in residence near where I had seen them nesting the previous year. 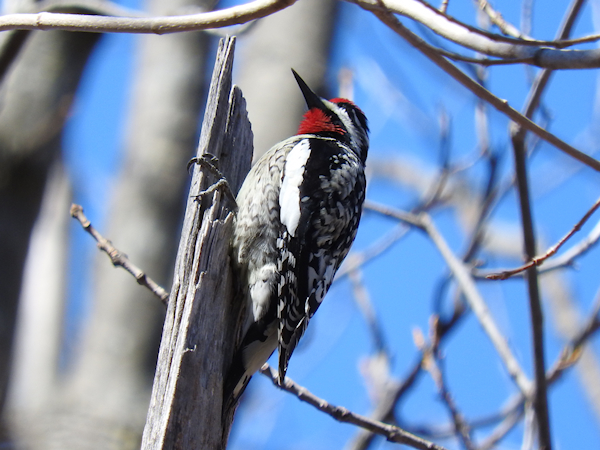 Once I entered the deciduous area along the hydro cut I began hearing the frogs calling. I counted at least four separate Spring Peepers peeping, multiple Western Chorus Frogs, and at least a dozen Wood Frogs quacking like ducks. Unlike the other two small species, I was at least able to see the Wood Frogs in the vernal pools bordering the hydro cut.

The Wood Frog is one of the true frogs, and typically lives in moist woodlands where it breeds in vernal woodland pools. Outside of the breeding season, this frog hides in logs, leaf litter, or under rocks – either in the water or out. The best time to see these small frogs is early spring, after the snow has melted but before the vernal pools evaporate. 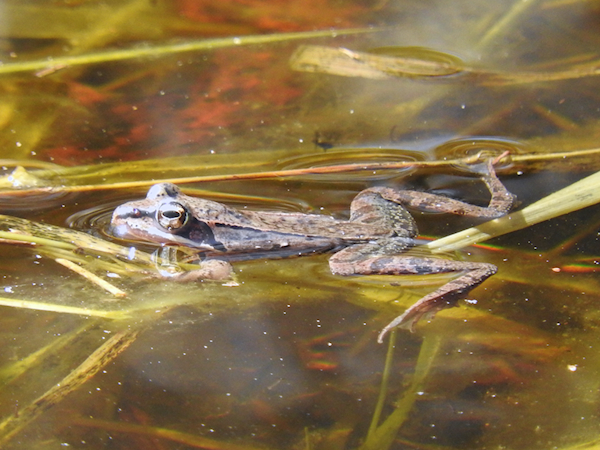 The Wood Frog is the most widely distributed amphibian in Canada, living in every province and territory. They are the earliest frog to breed, each female laying up to 2000 eggs in the vernal woodland ponds. I didn’t see any eggs, though I did see a few frogs mating! 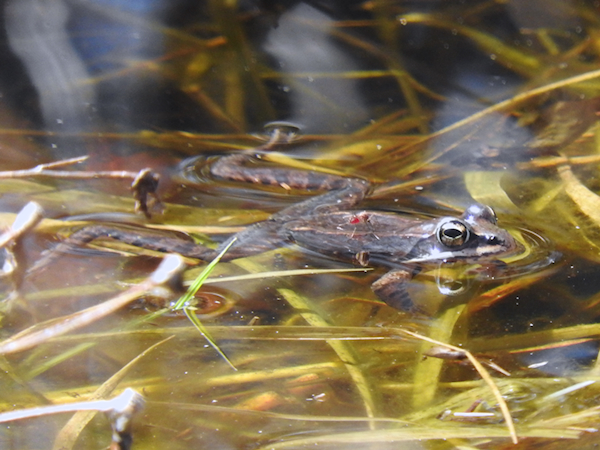 Once I had gotten my fill of the frogs (and thoroughly frustrated by not being able to see a single Spring Peeper or Western Chorus Frog) I turned to leave. A few moments later something fluttered by in the warm sunshine, and I realized it was my first butterfly of the year! It was quite orange so I thought it was a comma of some sort, but when it landed I realized it was something else – a Compton Tortoiseshell!

These butterflies had had a good year in 2017, so it’s not surprising that at least this one made it to adulthood and survived the winter. I don’t see them very often, so it was a great species to have as my first butterfly of the year!

The Compton Tortoiseshell is a member of the brush-footed butterfly family, which means that the first pair of legs is reduced in size, resembling a pair of brushes. Their diet consists of sap, rotting fruit, carrion, and scat; as such, these butterflies are able to emerge from hibernation as early as March since they do not rely on flower nectar in order to survive the way later-flying species do.

As I was following the butterfly a frog hiding among the leaf litter hopped out of my path. I was hoping it was either a Spring Peeper or a chorus frog, but of course it was another Wood Frog. At least I was able to get a much nicer photo of it out in the open! 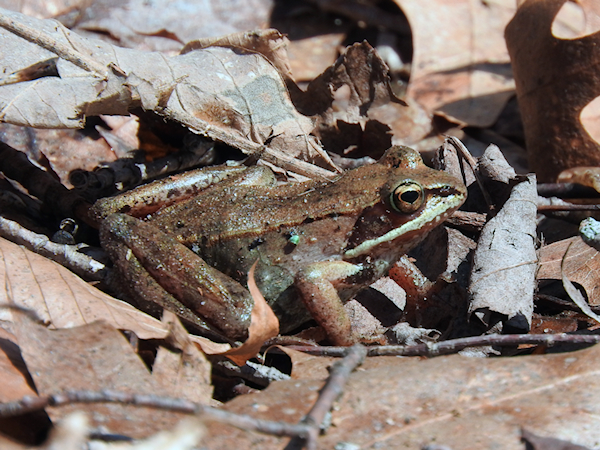 The next day I went over to the Jack Pine Trail to see if I could find any other butterflies. It was great for birds, with a singing Winter Wren, a flyover Pine Siskin, a couple of White-throated Sparrows and several juncos. A Wild Turkey was looking for seed in the middle of the path:

Best of all, I found two Mourning Cloaks sunning themselves! 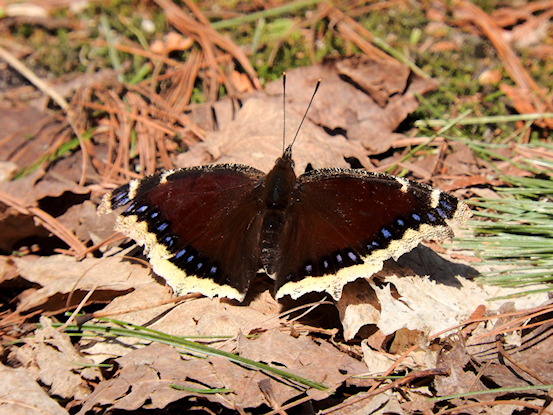 I found two more Mourning Cloaks at the Beaver Trail across the street, along with three Garter Snakes taking advantage of the warm sunshine, a Golden-crowned Kinglet and three Yellow-bellied Sapsuckers.

I always say that spring is my favourite time of year, though it’s a long wait from the return of the first Ring-billed Gulls and Red-winged Blackbirds to the emergence of the first butterflies and snakes and the return of my favourite bird species. The forest is coming alive after the long, dull winter; it’s marvelous to see so much colour and life again!

4 thoughts on “Wood Frogs and the First Butterflies”