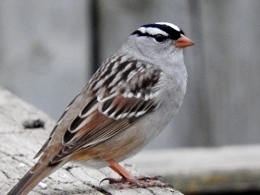 May is here, which means we’ve entered the peak of spring migration! I usually see more bird species in May than in any other month (except perhaps September), though this month has been off to a slow start. Not only did May 1st fall on a Monday this year, but the weather has been terrible – it’s been cloudy and rainy for most of the week, with some mornings still cold enough to require gloves. As such, I’ve been doing most of my birding around home, but even so I’ve managed to pick up a few good birds.

At least one Dark-eyed Junco is still hanging around the backyard as of today’s date, and one or two White-crowned Sparrows have been visiting my feeder since April 28th. They usually show up in my yard during the first week of May, so this is early for them. Today is the 9th day they’ve been present, which is also the longest period I’ve ever seen them here; I don’t get them every year, but when I do, they usually only stay a day or two. 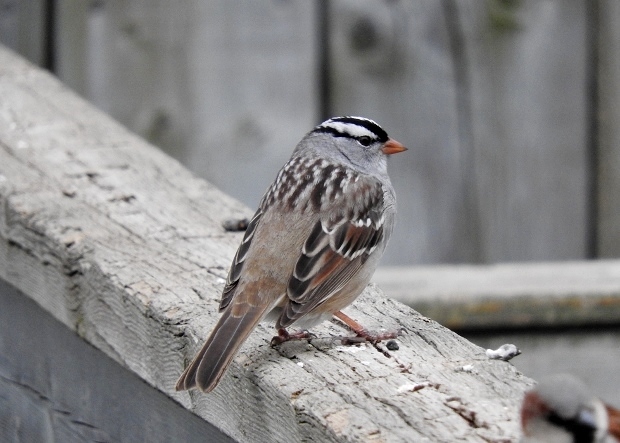 It looks like I’m standing right on top of the sparrow in this photo, but I was actually standing inside the house several feet away with the back door cracked open: 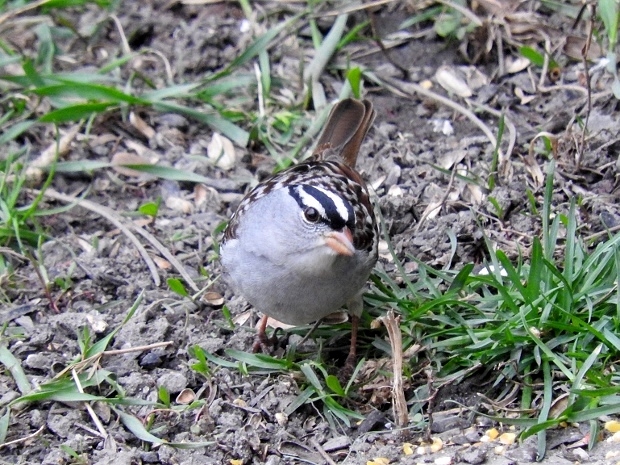 Yesterday afternoon a White-throated Sparrow finally showed up in my yard, and it was looking for seeds or insects in my back garden again this morning. A Ruby-crowned Kinglet was out back on May 4th, as was a Red-winged Blackbird (I couldn’t see it but I could hear it); and several Chipping Sparrows, House Sparrows, Mourning Doves and cardinals usually come every day. I haven’t seen any new warblers or songbirds since the Pine Warbler left on April 23rd, but a flyover mallard was new for my yard list, and I heard a Purple Finch singing out the front on April 28th. I now have 65 species on my yard list, and so far this year I’ve seen 36.

I never thought a crow would capture my interest, but one local individual has learned that the peanuts I throw out for the squirrels and chipmunks make for nice treats for crows, too. On April 23rd I looked out the back door and saw a crow on the roof watching the squirrels and a chipmunk in the backyard. I opened the door a crack, showed it a handful of peanuts, then tossed them onto the lawn. The crow landed on the fence, and then flew down onto the lawn where it grabbed a couple of peanuts before the squirrels could get to them. Six days later, on Saturday the 29th, the crow was scrounging for food beneath the feeder. I showed it the peanuts, and it flew up onto the fence when I opened the door and tossed them onto the lawn. Once again it grabbed the peanuts and flew off, returning twice that evening! I last saw this crow on May 3rd when I noticed it sitting on my chimney as I walked home from the bus stop. It was still there by the time I got inside, and this time I had my camera. When I threw out a handful of peanuts, it flew down onto the roof of the house behind ours. 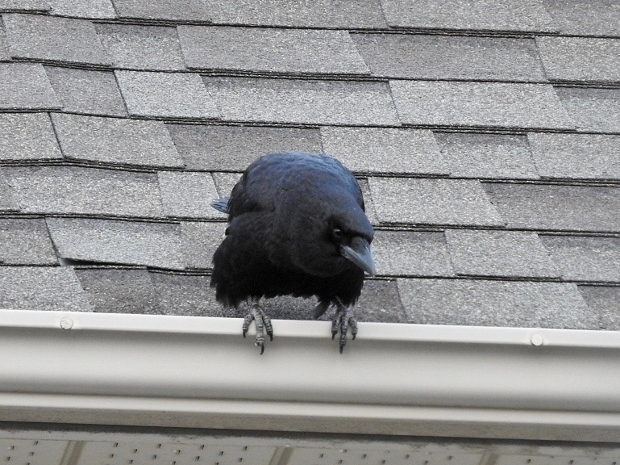 Then it grabbed a peanut, and instead of flying off with it, proceeded to eat it on top of the fence. I’ve haven’t seen this crow since then, but chances are, it’s a local resident, perhaps with a nest nearby. I hope it comes back again! 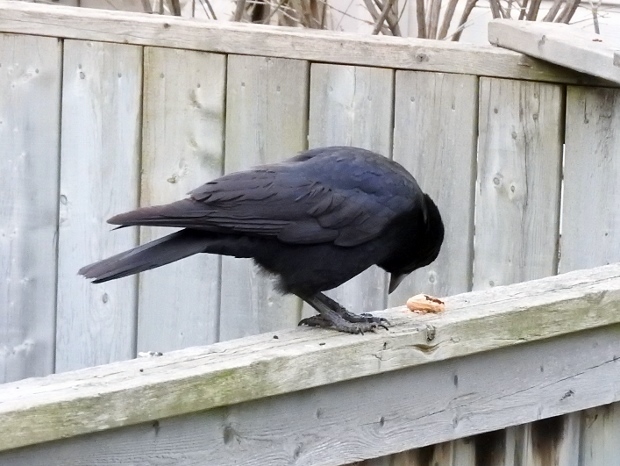 I finally had a chance to go for a walk on Thursday night, and went to the storm water ponds to check for new arrivals. As soon as I arrived I spotted two Hooded Mergansers, including one resting on the opposite shore; it was a plumage I had never seen before until this year, that of a young male molting into breeding plumage. Note how dark the face is, especially around the eye: 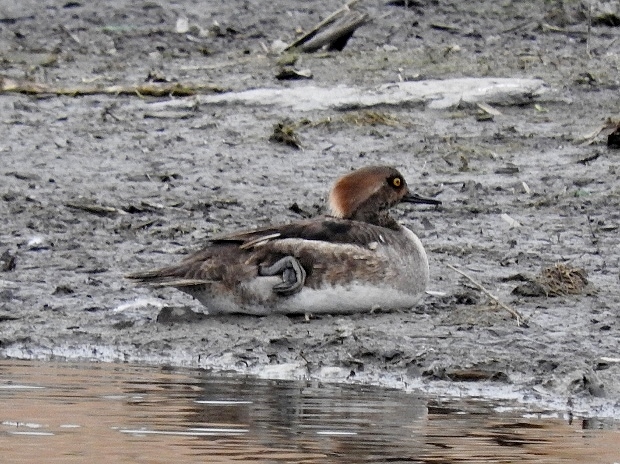 A second Hoodie was swimming on the water, and I later saw a third on a different pond. None of them were mature males. I was also surprised to count 14 Common Mergansers on the ponds, including both males and females in breeding plumage. This is the most I had ever seen here before. There were also a large number of swallows swooping over the water – I counted over two dozen of them, but was only able to see about five Tree Swallows and five Barn Swallows at any given time.

While I was counting swallows and mergansers I became aware of the R2D2-like song of a Bobolink. At first I dismissed it, thinking that perhaps I had mistaken the calls of the swallows overhead; but when I heard it again, I set out to track down the source of the song. I was standing near the wide, weedy field I’ve taken to calling the “sparrow field”, so if there were any Bobolinks around, this would be the place to find them. I thought they might be perching on a tall weed or sitting on the ground, but eventually I found two males sitting in a tree right next to the path! 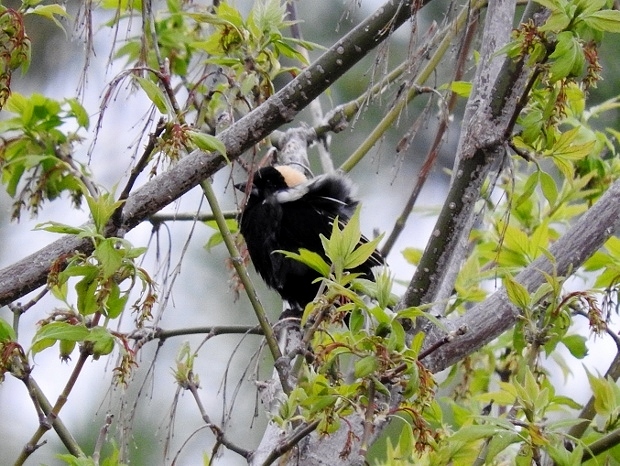 This was bird no. 111 for the eBird hotspot, and not one I was expecting to see here – in fact, I expected to find Savannah Sparrow long before Bobolink here, as they used to live in the field on the other side of Eagleson until the new housing development went up. It just goes to show that some birds aren’t picky about where they stop during migration.

I checked the trees south of the bridge next, and found a couple of Yellow-rumped Warblers foraging out in the open. I was hoping to see some other warblers, but that was the only species I found. 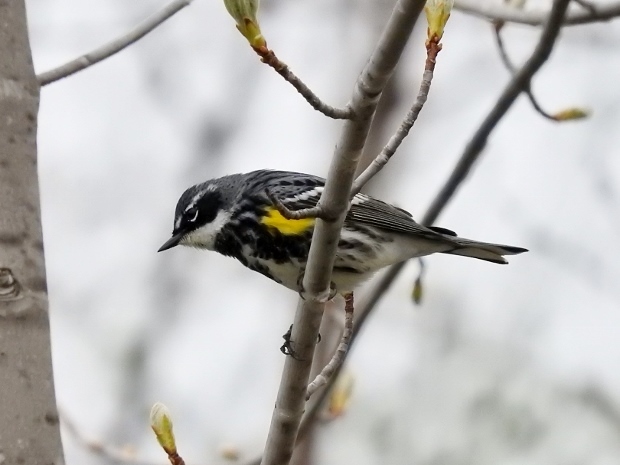 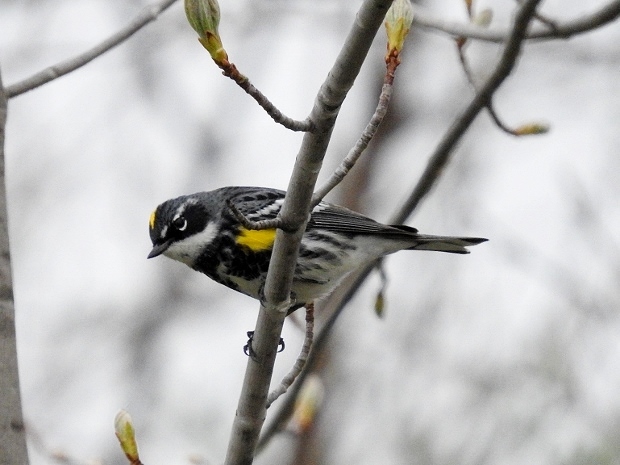 Other birds seen include Spotted Sandpiper, two different yellowlegs, an Eastern Phoebe, two juncos, one Brown-headed Cowbird, and a Purple Finch heard singing near Emerald Meadows Drive. This brought my total number of species up to 26; not bad for an hour-long walk after work in heavily overcast conditions! The storm water ponds continue to be a fascinating place during migration; although I greatly enjoyed last fall’s migration with the American Pipits, shorebirds, gulls and warblers, it seems the birds passing through in the spring are probably looking for any suitable green space (or blue space, for the ducks) to stop over for a rest, leading to some interesting and unexpected species.