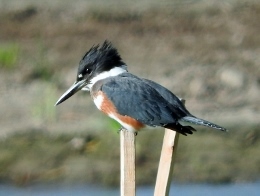 Shorebird migration is in full swing right now. This is one of my favourite groups of birds, and normally I have to go to places like the Richmond Lagoons, Shirley’s Bay or Andrew Haydon Park to see them – and this summer’s drought has left the Richmond Lagoons with zero habitat. However, there’s a terrific spot to see these particular birds only a 10 minute walk from my house. The Emerald Meadows storm water pond system has had fabulous habitat these past few months, resulting in 11 species so far since I started visiting in July. This was about the time that the work on the ponds had been completed, and as the southern ponds had been completely drained while the construction was going on, for several weeks they had held only an inch or two of water. Since then the water levels have been slowly increasing, but the water is still low enough – particularly in the southern-most pond – to attract some shorebirds to the muddy edges.

Saturday morning started out bright and sunny, so I started my morning with a walk around the ponds. What started out as a brief stop turned into a 90-minute tour when I realized the area was full of migrants. As soon as I arrived I saw several small birds bouncing around the bare branches of the dead ash trees next to the path. There were quite a few goldfinches, a White-breasted Nuthatch, and a single Downy Woodpecker present, but to my delight I was able to identify a couple of warblers! I managed to get my binoculars on a Northern Parula, a Black-throated Green Warbler, three Tennessee Warblers, and a Magnolia Warbler before they disappeared into the cover of the densely-leafed live trees on the other side of the path. All of the warblers except for the Magnolia were new for the eBird hotspot, and the White-breasted Nuthatch was the first one recorded here as well.

I started walking south and saw all of the four regular herons: a Great Blue Heron, a Great Egret, a Green Heron, and a Black-crowned Night Heron. There were seven Double-crested Cormorants present as well. 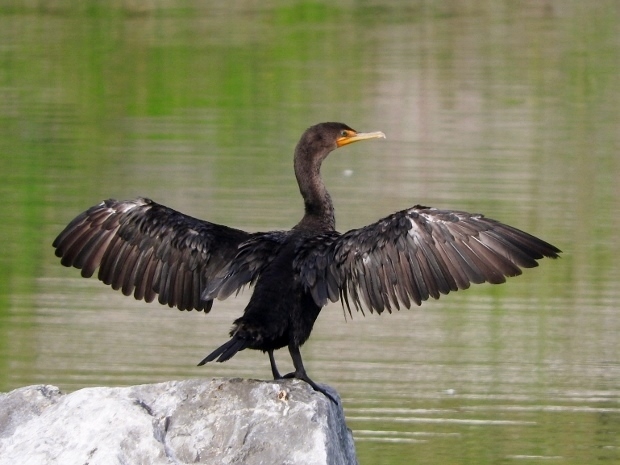 It was right about then that I started losing the sun as a thick bank of clouds moved in from the west. When I reached the southern-most pond, I saw several small shorebirds standing in the shallow water near the large boulders placed in the middle of the pond. Several were Killdeer (I counted 14 around the ponds in total), and among the Greater and Lesser Yellowlegs I saw two smaller birds that immediately intrigued me. One was a Pectoral Sandpiper, a small shorebird with a dense brown bib, but the other one was something else. It had yellow legs, a noticeably pale supercilium, and a long, fine bill. It’s been a year since I last saw a Stilt Sandpiper, a bird that has been described as the intermediate between a dowitcher and a yellowlegs, and I was thrilled to see one at the ponds.

I tried taking a few pictures of it in order to confirm its identification, but when I checked the bird with my binoculars I realized I was photographing the Pectoral Sandpiper instead – and that the Stilt Sandpiper had vanished. I walked all the way around the southern pond and finally found it in the vicinity of both a Greater and Lesser Yellowlegs, giving me a great comparison between the three species.

Then it started walking toward me, probing in the muck as it went along, and I cursed the gray skies and poor light as it passed right in front of me.

I didn’t stay much longer at the ponds, stopping only to photograph one of the Great Blue Herons, a Herring Gull, and a Belted Kingfisher perching on a concrete wall. I heard a Common Yellowthroat’s familiar chip note issuing from a patch of vegetation near the bridge, and heard a Common Raven calling as it flew by overhead. A flock of 13 Blue Jays flying in a southward direction drew my interest, and I wondered if they were migrating. A pair of Northern Flickers flying over brought the morning’s tally up to 35 species – not a bad number for this small area!

The sun was shining when I got up this morning, so I headed back to the ponds to see if the Stilt Sandpiper was still there. Unfortunately the wind was quite brisk, making it difficult to hear any chip notes of warblers or other small songbirds in the trees. Because I wasn’t able to detect very many songbirds my Sunday tally was much lower, only 20 species in total.

To my disappointment, the Pectoral and Stilt Sandpipers were gone. I did see a Lesser Yellowlegs…

…and about 10 Killdeer sheltering in a weedy area above the water. It was strange to see such a large group of them so close together away from the water’s edge, but perhaps they had chosen this spot to hunker down out of the wind.

Spotted Sandpipers are common around the edges of the pond during the warmer months, and I found this one working its way along the rocks.

There is a large stand of milkweed on a spit jutting out into the central pond, and I spent some time looking for insects there. A monarch caterpillar was the only notable find. 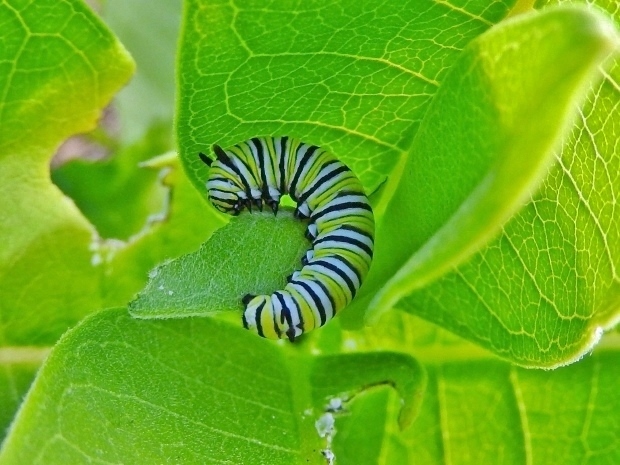 I continued walking north, and spotted a Belted Kingfisher perching on the posts of the orange construction fencing surrounding the plantings on the east side of the channel. I was able to get close enough with my 60x zoom camera to get some pictures worth posting. Normally these birds fly off with an annoyed rattle as soon as they realize a human is in the area.

I checked the northern pond and didn’t see anything, so I turned around to head back to the southern ponds. A Turkey Vulture was taking advantage of the windy day and was soaring high in the sky, while a Common Raven started calling from a lamp-post near the construction site. Three Herring Gulls were roosting along the floodplain channel along with about 30 Ring-billed Gulls, and only four Song Sparrows were heard singing or calling compared to the 15 I observed yesterday. Even they were keeping a low profile in the wind.

I saw a Northern Flicker fly across the pond and land in the sumacs near the milkweed patch, so I approached it to see if it would stay long enough for some photos. Northern Flickers are not as cooperative for photos as our other woodpecker species, because they don’t perch on tree trunks and peck away for a long time. Flickers prefer to feed on ants and beetles, and spend most of their time on the ground where they use their bill to hammer at the soil or downed trees to get these insects. Fortunately the Northern Flicker stayed in place until I got close enough for a few photos, looking around as though surveying its domain. The black “mustache” indicates it is a male.

I finished my outing with another walk around the southern-most pond just in case I had missed the Pectoral and Stilt Sandpipers. Both were long gone, however, and I spent some time watching and photographing the yellowlegs and one of the two Great Egrets. Three Lesser Yellowlegs were foraging at the pond’s edge, including this one standing belly-deep in the water. 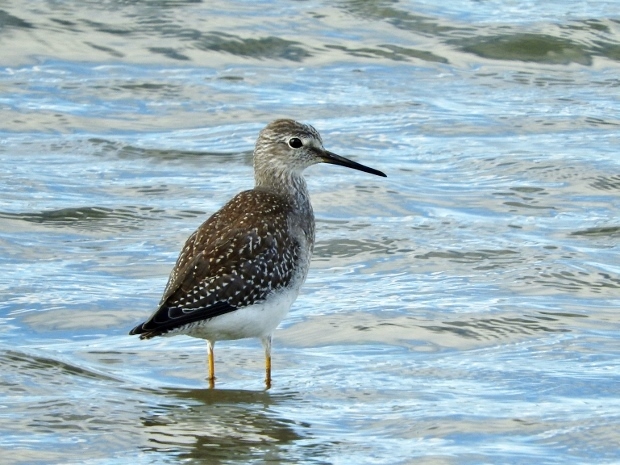 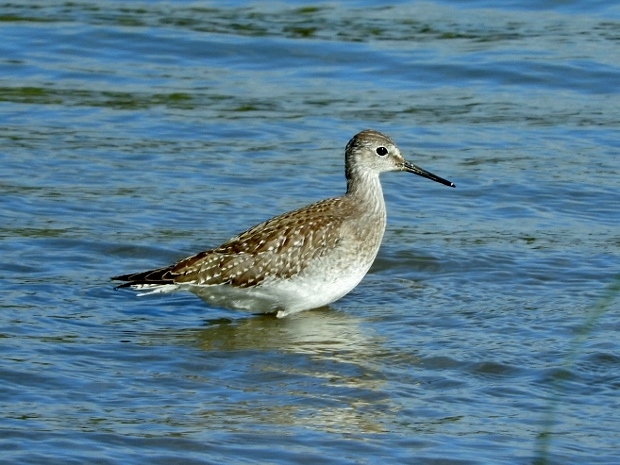 The Great Egret was hunting in the small bay not too far from where I was standing. It’s hard to believe that these were rare here in Ottawa when I first started birding almost 10 years ago.

Notice the Greater Yellowlegs walking along the shore at the bottom left-hand corner of this image. 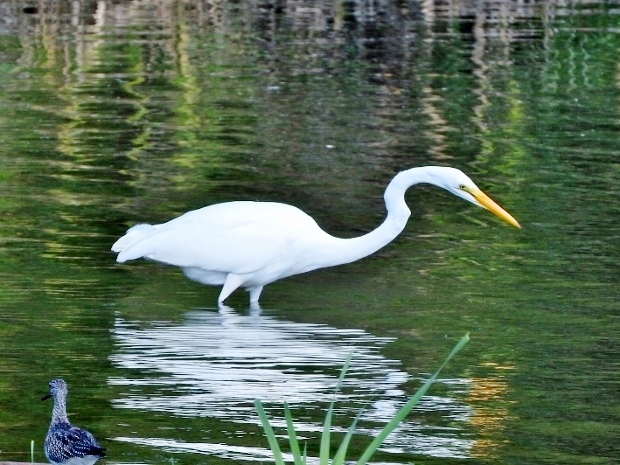 This was the only Greater Yellowlegs present today, and I was lucky that it turned around and walked back toward me into the sunshine. The two-toned bill which appears slightly upturned is the best way to differentiate these birds from the similar Lesser Yellowlegs.