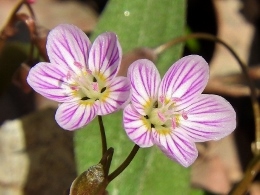 The Beaver Trail is one of my favourite trails to visit in mid-spring: spring ephemerals such as violets, Trilliums and Hepatica are in bloom, a good variety of butterflies – including various anglewings, Mustard Whites, elfins and azures – are on the wing, and both breeding birds and migrants alike can be found along the edge habitat surrounding the ponds. Although one of the shorter trails in Stony Swamp, the variety of wildlife that can be found here makes it worth visiting in any season. Spring, however, is my favourite season for visiting. On May 7th I arrived at the parking lot just before 8:00 am, and found only a few chickadees and Song Sparrows. It wasn’t until I reached the first marsh that I heard my first good bird of the day – an American Bittern. This was a year bird for me, and not a bird I hear very often in Stony Swamp, making it a great find.

The variety was much better at the back of the trail. The Common Yellowthroats had not yet arrived, but I did hear six Swamp Sparrows singing in the marsh. A Northern Waterthrush was singing in the wet area where the trail splits off toward the Lime Kiln Trail, and further along that trail I heard an Ovenbird, Pine Warbler, Winter Wren and Hermit Thrush. As there are a number of pine trees along the side trail, I spent some time looking for Eastern Pine Elfins, a small, orange-coloured butterfly that breeds near different types of pines. I’ve seen this species once along this section of the trail several years ago, but haven’t seen any since. When I saw a small butterfly flying a few feet above the trail I tracked it until it landed. It was a different member of the Lycaenidae family – a Henry’s Elfin.

I see one or two Henry’s Elfins in Stony Swamp each spring, but they are still uncommon enough to give me a small thrill when I see one. Although the Butterflies of Canada web page says that the Henry’s Elfin is usually less numerous than the other springtime elfins, and is very local and often difficult to find, it is the elfin I see most frequently. The wings are dark brown with a pale brown border along the outer edges, and they often hold hints of maroon and – in exceptionally fresh individuals – green in its wings. For some reason they remind me living pieces of stained glass. 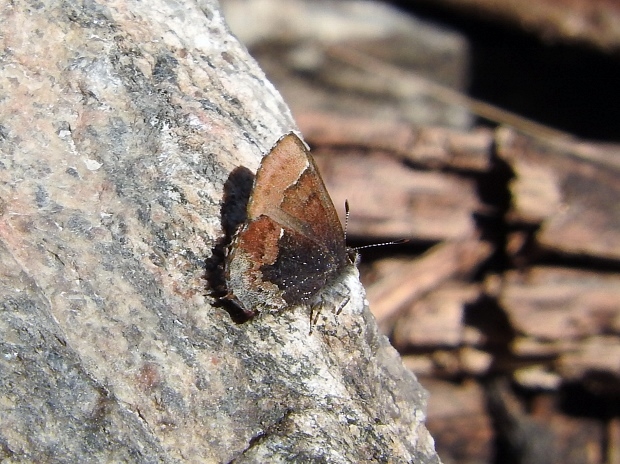 Henry’s Elfins are most common in open deciduous woods or dry, open pine woods. The larvae feed on blueberry, plums, and, at least around Ottawa, Black Buckthorn. The adoption of the Black Buckthorn as a food source has allowed local populations to expand into small urban woodlots and wet, wooded habitats where this invasive, non-native shrub is found; it has been suggested that this new food source is partly responsible for its increase in abundance as well.

There were at least two Henry’s Elfins in the area, and I spent some time tracking them down and photographing them. Then a Mourning Cloak sailed by, and landed on a rock to bask in the sunshine, so I stopped to take its photo as well.

Several azures were fluttering about, too. They are also members of the Lycaenidae family, but are much more common and widespread than the elfins. I have been calling these early flying azures “Spring Azures” (Celastrina ladon, according to the 1996 OFNC checklist of butterflies) since I started butterflying, but when I entered these observations into iNaturalist, a database similar to eBird and eButterfly but for all living flora and fauna, I discovered that two different species called “Spring Azure” have been recorded in eastern Ontario: Spring Azure (Celastrina ladon) and Northern Spring Azure (Celastrina lucia). As the azure complex is a difficult one to understand, I asked the local butterfly group what the current status of the Celastrina complex is – and which species are found in Ottawa. Rick Cavasin answered my email, and informed me that a paper on precisely this topic was recently published by Ross Layberry and B. Christian Schmidt.

The paper states that what we thought were two (or three) different single-brooded species are actually one multi-brooded species, Celastrina lucia. Celastrina ladon, which occurs further south, can be differentiated from C. Lucia by the structure of scales on the wings of the males – a structure that is not visible in photographs, but requires magnification to see. Accordingly, the species found in Ottawa is called the Northern Spring Azure, and has multiple broods throughout the season. The butterflies we previously called Summer Azures (C. neglecta) are really second or possibly 3rd generation Northern Spring Azures. Neither Summer Azures nor Cherry Gall Azures appear to occur in Ottawa, although research in this area is still ongoing.

I found another Henry’s Elfin (or possibly one of the others I had seen earlier) and took several photos. It was very peaceful watching all the butterflies in this one large, sunny opening while the unseen Hermit Thrush kept singing his song. 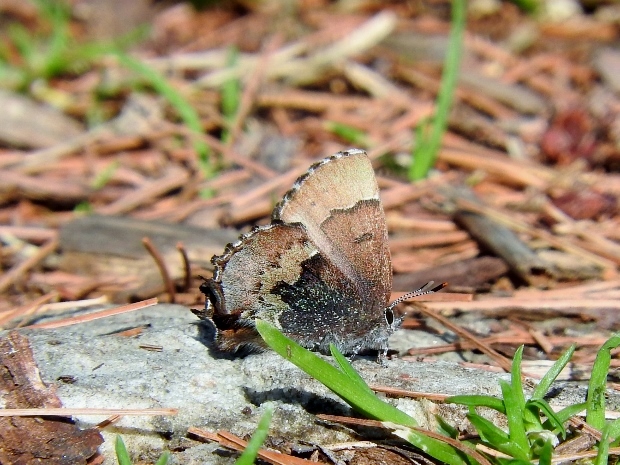 I also saw a Blue-headed Vireo and a Yellow-rumped Warbler in the same area – it’s a great little spot, and often quite birdy during migration though there is little to recommend it. Perhaps the openness of the trail here provides some decent edge habitat for birds moving through.

As I wasn’t finding any Eastern Pine Elfins I turned around to go back. Along the way I saw a small black mammal moving slowly through the vegetation. I thought it was a squirrel at first, until I noticed it was sitting rather still (something squirrels seem incapable of), and when I got a good look at its shape, it appeared round rather than long and sinuous. When it moved out into the open I realized it was a porcupine – a baby porcupine!

I have never seen one this small before, and wasn’t sure at the time if it was normal for it to be alone out in the open like this. I looked around for its mother, but didn’t see her; that doesn’t mean she wasn’t nearby. Some mothers, like White-tailed Deer, leave their babies alone for long periods of time during the day while they forage, though the fawns are usually hidden away out of sight. 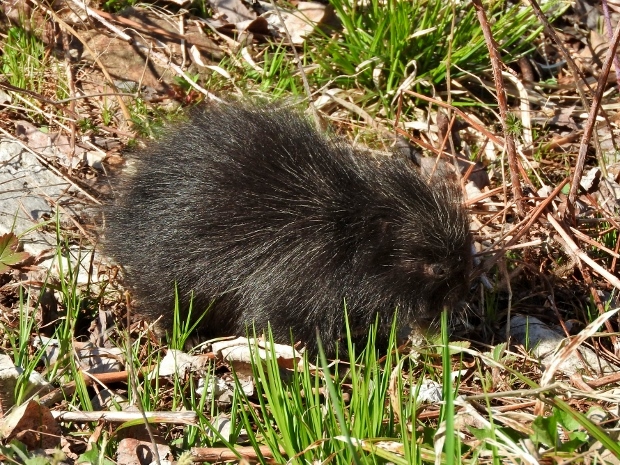 Porcupines mate in the fall, usually in late October or November in the northern portion of its range. After a gestation period of about 30 weeks, the female porcupine gives birth sometime between March and May. Porcupines do not create any sort of nest or den for the birth, but give birth to a single porcupine in a rock pile, under a log, or beneath a brush pile. Baby porcupines are born with their eyes open, and covered in dense black hair. Their quills are soft at birth, but harden within a few hours. Baby porcupines feed on their mother’s milk for the first seven to ten days, and although they are able to climb trees by this time, they tend to spend more time on the ground. Once the baby finishes weaning, the mother begins to leave the baby alone for longer and longer periods while she feeds on emerging green plants. 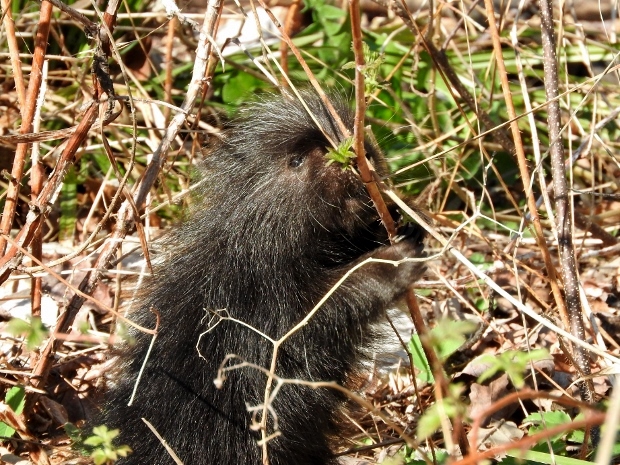 This baby was so cute as it ambled along the ground, trying to maneuver around plants and brambles while looking for fresh green leaves to eat. I shot some video of it to memorialize the encounter:

It was hard to tear myself away from such a tiny creature, and I hoped it would thrive in its surroundings. Fortunately this part of the trail is nowhere near the road, so at least it is safe from cars! Eventually I left, though it broke my heart just a little to leave it alone there.

I headed back toward the Wild Bird Care Center and was delighted to find that one section of the trail was carpeted in tiny pink flowers. This is the only trail I know of where the flower Spring Beauty can be found in abundance. They are one of my favourite spring ephemerals, and I spent quite a bit of time photographing them. 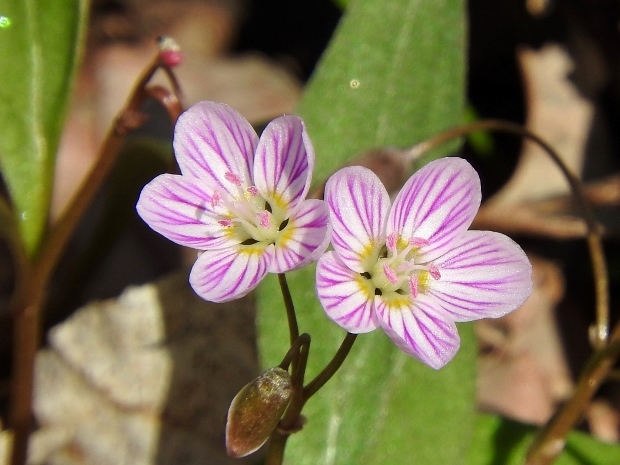 A couple of Trilliums and Downy Yellow Violets were also in bloom.

On my way out I added one more warbler to my list: a Black-throated Blue Warbler I heard singing near the entrance, though I wasn’t able to see it.

I had a great time exploring the Beaver Trail that morning – I counted 35 bird species in just under two hours, had my first great butterfly outing of the year, and enjoyed watching the adorable baby porcupine foraging on the ground. I loved hearing all the different birds singing, and even managed to see some of them, such as the Pine Warbler, Blue-headed Vireo and a Yellow-rumped Warbler. This is the beginning of my favourite time of year, as usual, the Beaver Trail did not disappoint!

2 thoughts on “Spring Beauties: Butterflies, a Porcupine and Spring Ephemerals”