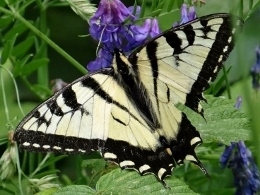 I was able to add quite a few butterflies to my Nova Scotia list just by walking around Iris’s property and checking the wildflowers along the dirt road on my morning walks. I used the Butterflies of Nova Scotia site to see which species are found in the province, and the Maritimes Butterfly Atlas checklist for descriptions of the butterflies. Fortunately, Nova Scotia has fewer species on its checklist than Ontario does, and as most of them are also found in Ontario, identification wasn’t too difficult. One species I was surprised not to see on the list is the Eastern Tiger Swallowtail; in Cape Breton and on our boat tour I had seen several yellow swallowtails flying over the highway and even across the water of St. Ann’s Bay. I thought that they might be Eastern Tiger Swallowtails given the date (in Ontario they fly later than the Canadian Tiger Swallowtail, which flies mainly in late May and June), but I realized later they could only be Canadian Tiger Swallowtails.

My first exciting find came during my first morning walk on a partially overcast morning. Although the sun disappeared early, it was warm enough for the Hudsonian Whiteface and these two fritillaries to be flying; I suspected they weren’t Great-spangled Fritillaries but wasn’t certain, so I asked Ross Layberry to see if he could identify them without a view of the underside of the wings. He said they are Aphrodite Fritillaries based on the the prominent black mark in the long basal forewing cell, which is particularly visible in the butterfly on the left. 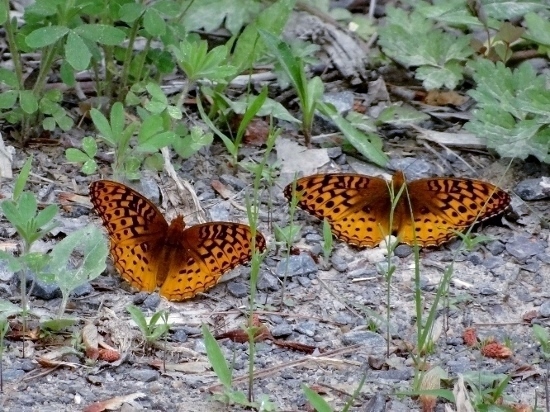 I am not as familiar with the terminology of a butterfly’s body parts as I am with bird terminology, and had to look up what he meant by the “long basal forewing cell”. The forewing is the wing closest to the head, and the basal cell is the cell (an open area surrounded by veins) closest to the body. I’ve put white lines in the photo pointing to the black mark that differentiates this species from the similar-looking Great-spangled Fritillary: 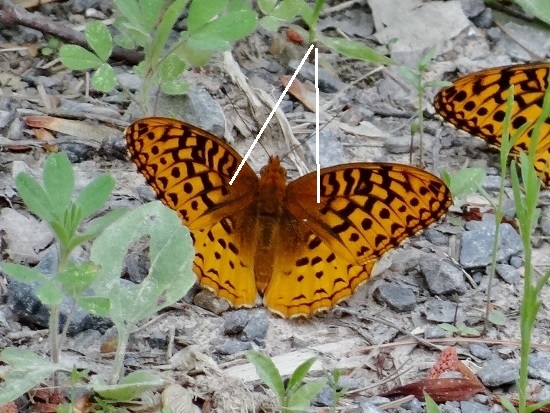 The Atlantis Fritillary also has a black mark in the basal forewing cell, but it has blue eyes instead of brown eyes and a solid black border along the outer edge of the forewings instead of the two parallel lines reminiscent of a set of railroad tracks.

I also saw a few small skippers which looked like Dun Skippers and Hobomok Skippers but didn’t get any decent photos.

Later that night I was able to do some “mothing” when we returned home close to midnight and I spotted several species resting on the garage door beneath the outdoor lights. One was a lovely pink and yellow moth that I have been hoping to see for a while, the Rosy Maple Moth. Found mainly in deciduous forests across eastern North America (including Ontario), Bugguide states that “if it weren’t so common, it would generate greater excitement – it is so beautiful”. In Canada these moths have one brood each year and fly from May to August. As the name suggests, the caterpillars feed on various oak and maple trees including Red Maple, Sugar Maple and Silver Maple. The adults do not feed.

While I was photographing the Rosy Maple Moth I became aware of a much larger moth fluttering around. It hit me twice before attacking the light and eventually landing on the wall. It was huge – at least two or three inches across. I wasn’t surprised when I identified it as a sphinx moth, specifically the Waved Sphinx Moth, as these can be quite large. The Waved Sphinx Moth is found across eastern North America in deciduous forests, shrubby areas, riparian areas and in the suburbs; the caterpillars feed on the leaves of ash trees, hawthorn, lilacs, oaks, and other woody plants before pupating underground, while the adult moths probably do not feed. This was also a lifer for me.

I didn’t see many butterflies in Iris’s yard itself during my visit; just a Mustard White and what I took to be a Summer Azure. This species is part of a complex of identical-looking, closely-related species that are differentiated mainly by flight season – at least in Ontario. Similar in colour and pattern to the Spring Azure and Cherry Gall Azure, this species flies from mid-June until early September in Ontario, and was once thought to be a second-brood form of the Spring Azure which is on the wing from early April to mid-May in southern Ontario. However, in some areas, such as extreme southwestern Ontario, the Spring Azure is rare and could not possibly account for the large numbers of Summer Azures which emerge in the area in the summer. 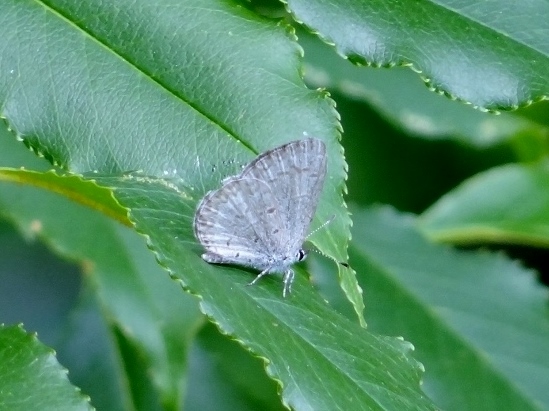 I was surprised to read that the Maritimes Butterfly Atlas treats all azures as a single entity, the Northern Spring Azure or “Celestrina sp.”, although it acknowledges three different forms based on the pattern of the underside of the wings. It says that the taxonomy of this genus is uncertain, particularly in the Maritimes where the proposed American models don’t seem to adequately explain what is happening in their region. Until the situation is fully understood, they are treating all azures as a single species, the Northern Spring Azure.

As the mornings were not as productive for finding insects as I had hoped, I decided to try my luck with a lunch-time walk on our last day there to see if I could spot more butterflies and dragonflies once it warmed up. I only saw one dragonfly, but there were plenty of butterflies around and, even worse, black flies. They took a couple of chunks out of me while I was scanning the Cow Vetch, clovers, and thistles, making me wish I had put on some bug spray.

Although the skippers were the most plentiful butterflies, a couple of Northern Pearly-eyes were present as well, including this one which seemed to be feeding on the sap oozing from a birch tree. 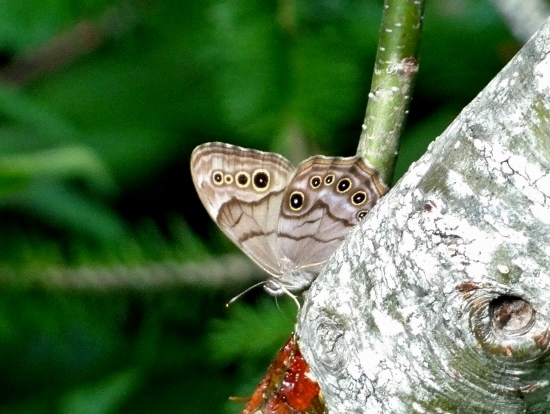 I identified three different skippers in the vegetation: Hobomok, Long Dash, and a single Arctic Skipper. Although I have much better photos of the Arctic Skipper from Ottawa this year, I took this one mainly for documentation purposes:

The other skippers were much more cooperative in posing for me. I spotted several males resting in the vegetation, probably watching for females; some butterfly species find mates by perching in prominent locations and then flying out to investigate anything that comes within range. If it is another male, the two butterflies will fly upwards in tight circles around each other, until one breaks out of the spiral and both return to their perches. I saw this happen more than once, usually just as I was focusing on the butterfly and about to take a photo! Fortunately this Hobomok Skipper was content to stay put on the leaf of a Red Clover. 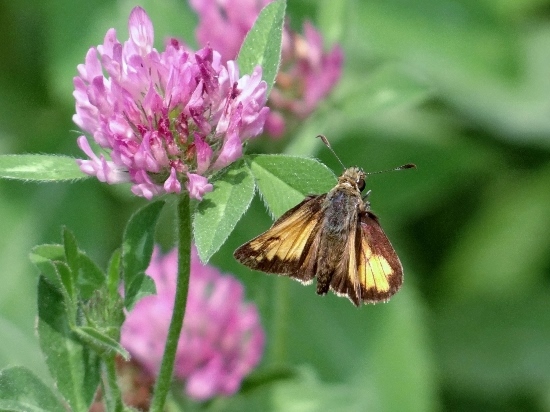 Although I spotted at least one Long Dash Skipper also resting in the vegetation, it was not nearly as photogenic as this one that I found nectaring on a clover flower. This skipper can be found in moist meadows and fields, marsh edges, streamsides, grassy forest edges, and even roadsides and disturbed agricultural fields where it frequently feeds on flowers such as Red Clover and Cow Vetch. In wet meadows, Long Dash Skippers feed on the nectar of Blue Flag irises, something I’ve never seen but will have to look for next season.

As I made my way toward a large patch of Cow Vetch I spotted something much more interesting: a Canadian Tiger Swallowtail! It flitted from flower to flower, and I followed it for about ten minutes trying to get some decent photos. I am always captivated by these butterflies when I see them, not only because they are so much larger than most of our other local butterflies, but also because their bold black and yellow stripes is a strikingly unique colour combination. This individual has a large chunk missing from its right hindwing, making me wonder if it was the victim of a bird attack.

While I was following the swallowtail, another brightly-coloured butterfly zipped by and landed on a different purple flower. It was a stunningly fresh Great-spangled Fritillary, a species which is fairly common in Stony Swamp back in Ottawa. As with the Aphrodite Fritillary, it would have been nice to have gotten a photo of the underside of its wings, but as I find these butterflies don’t usually sit still for very long, I was very happy to have gotten the photos I did. 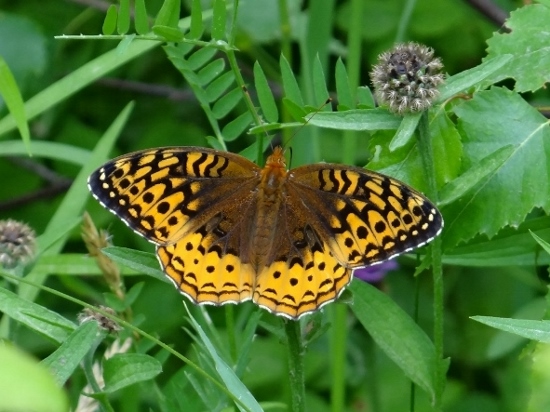 I was fairly sure it was a Great-spangled Fritillary based on the size alone, for a smaller fritillary came along, attacked it once or twice, and then vanished. I tried to see where the other butterfly went but it had disappeared completely. In the meantime the Great-spangled Fritillary was enjoying the nectar of these flowers. The males are bright orange, with distinct black veining on the upper surface, while the females have a large brown central area close to the body which sharply contrasts with the yellowish outer edges of the wings.

This butterfly species has a single generation each year, flying from early June into September depending on location and weather conditions, although it is most abundant during the month of July. They can be found in open, moist areas such as meadows, weedy upland fields, pastures, and open woodlands. Their eggs are laid in late summer on or near violets. When the caterpillar hatch, they do not feed but overwinter until spring, when the leaves of the young violets provide food.

I was happy to have had the opportunity to get out in the afternoon while the sun was shining and see so many butterflies. Although I didn’t see any butterflies species I couldn’t have seen back home, the ones that I did see, as well as my two “lifer” moths, helped to make the trip memorable.