I was surprised when I got home from birding on Saturday and found this small beetle clinging to the front of my house. It was tiny, about the size and shape of a ladybug, and I’m fairly sure that it’s a Common Willow Calligrapha (Calligrapher multipunctata) based on Christine Hanrahan’s lovely photos on Pbase. The nights have been frosty lately, dipping down to about or just below 0°C, and I haven’t seen many insects about so I assumed they had all died off or were preparing to hibernate in some nook or cranny.

As its name implies, the Common Willow Calligrapha feeds almost exclusively on willow leaves. It is considered a pest, as the larvae skeletonize the willow leaves, while the adults chew small holes in the leaves. While the damage usually isn’t severe enough to kill the plant, it can weaken it and make it susceptible to other pests and diseases.

The tiny gold beetle was still there yesterday morning when I got up, and I was surprised it was still alive. I gently removed him from the wall and put him on a leaf in my garden in a warm beam of sunlight. When I checked a couple of hours later, he was gone. 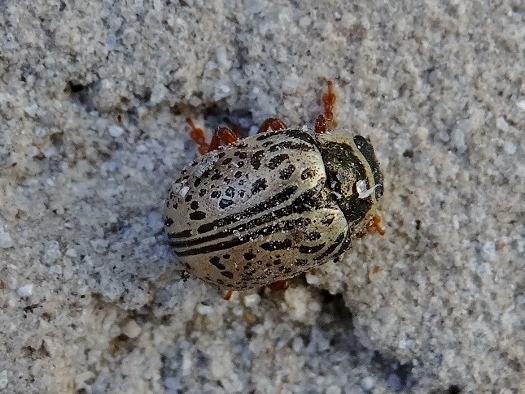 The Common Willow Calligrapha overwinters as an adult in the leaf litter on the ground or beneath the bark of willow stems, emerging again the following April or May. Females lay eggs shortly after emergence, and, in the northeast, two or three generations may occur each season before the shorter days and colder nights force them to hibernate in the fall.

This was the first time I had ever seen this species, and I was amazed to find this willow-specialist on my house of all places! This isn’t the first interesting bug I’ve found on my house; others include the fishfly and the Blinded Sphinx Moth in June 2009, and the Ebony Boghaunter in 2012. Given the lateness of the season, I probably won’t find any more; I’m guessing this will be the last insect I photograph in 2013. If so, it’s a beautiful one to end the year with!