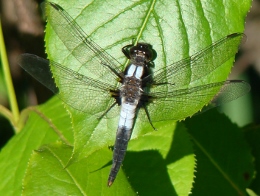 On June 15th I participated in the Ottawa Field-Naturalists’ Club (OFNC) excursion to Gatineau Park led by Justin Peter. Although cool at first (it was only about 12°C when I left at 6:00am), the sky was clear and it quickly warmed up as the sun rose higher in the sky. We spent the first half of the outing birding along Meech Lake Road and the second half along the trail at the end of the Champlain Parkway. We met at a parking area (P8) along Meech Lake Road where we heard A Pileated Woodpecker, a White-throated Sparrow, an Eastern Phoebe, and an Alder Flycatcher as soon as we got out of the car. A lovely male Purple Finch landed in one of the large trees next to the parking lot, and we saw a Common Raven fly over carrying food in its mouth. A couple of Chipping Sparrows, American Goldfinches, Yellow Warblers, and Red-winged Blackbirds also made an appearance.

We walked down the Gatineau Parkway to a large beaver pond, encountering a Brown Creeper, several Cedar Waxwings, a cooperative Least Flycatcher, a Veery, and a Red-eyed Vireo singing ceaselessly from the top of a tall tree. As an experiment, Justin counted the number of times it sang in one minute; he counted 22 songs, which means it sings 1,320 times in an hour and 10,560 times in an 8-hour day! Vireos sing well into the afternoon, long after most other birds have stopped singing. While some birds allot a certain portion of their day to perching somewhere and singing to defend their territories (such as the familiar robin singing from a neighbour’s roof), vireos and other small birds sing while they are foraging for food and going about their business. 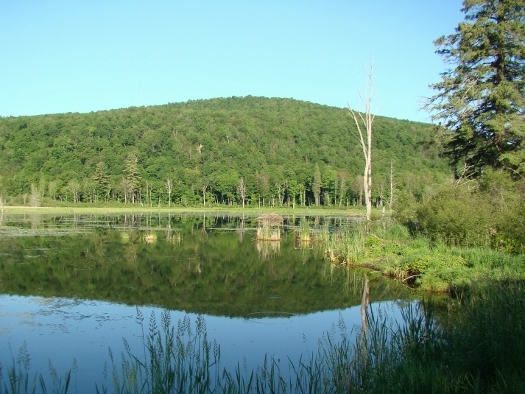 At the beaver pond we found a couple of mallards, a Great Blue Heron and a Wood Duck in the water. A pair of Eastern Kingbirds perched on a beaver lodge, keeping an eye on the large Snapping Turtle laying eggs in the dirt at the base of the lodge. A Common Yellowthroat, Swamp Sparrow and Marsh Wren sang from hidden perches within the vegetation surrounding the pond. Someone played a Virginia Rail recording to see if it would elicit a response; we heard the grunting sound of a responding rail briefly before one flew across the open water to a thick stand of cattails. Three Great Blue Herons flew over the pond but didn’t land.

I saw my first dragonflies of the day near the pond. Although the sun hadn’t risen very high, we found a couple of Chalk-fronted Corporals sitting in the sunlight waiting for the day to warm up. The only other species I saw was a Dot-tailed Whiteface resting on a lily pad in the water. On our way back to the car I found my first butterfly of the day, a Common Ringlet. 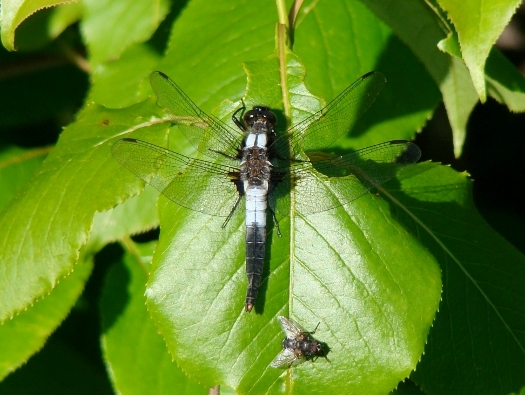 We drove over to another parking lot along Meech Lake Road where we saw a Turkey Vulture and a Mourning Dove and heard a Wilson’s Snipe winnowing somewhere behind us. My attention was caught by a large clubtail resting on the ground at the edge of the parking lot. It didn’t have an obvious club, so I thought it might belong to the genus Arigomphus as I have seen a number of Horned and Lilypad Clubtails lately. However it was female, making it difficult to identify by the shape of the claspers, and it didn’t have the rusty-orange colours beneath segments 8 and 9. I took several photos of her while she munched on some small insect, knowing that in order to identify her I would need photos from as many different angles as possible. 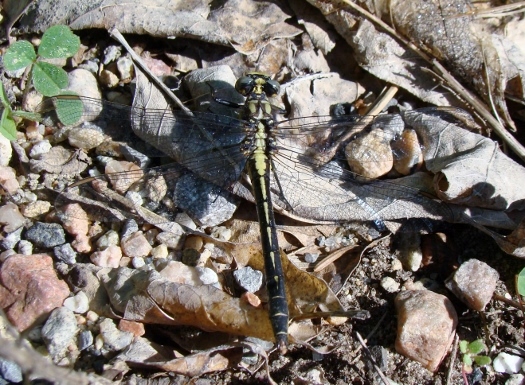 When I got home at looked at the photos on the computer I was able to rule out Dusky Clubtail, one of our more common species, as there is no obvious yellow spot on segment 10. Further, her colours are sharp and bright black and yellow, whereas the few Dusky Clubtails I’ve seen in the past have been duller in colour, more brown and greenish. The three yellow rings on the final segments also confused me. It looked like I had found a lifer, but which one? 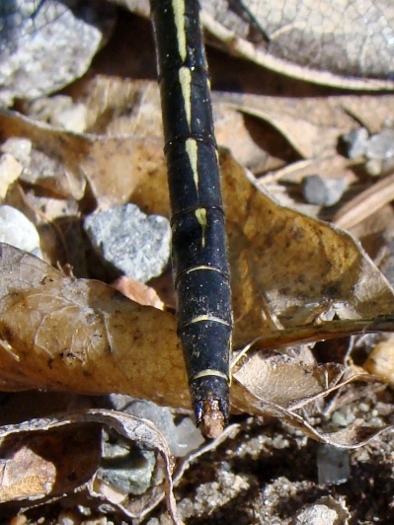 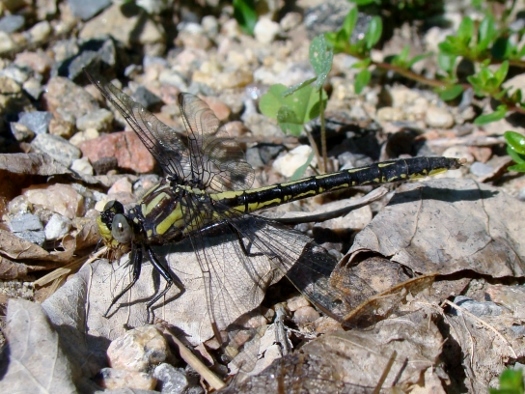 To my disappointment, no one could provide a definitive ID. While one person leaned toward female Beaverpond Clubtail based on the black colour of the hind leg (Harpoon has a pale femur of the hind leg) and the gray-blue colour of eyes (mature Harpoon usually has gray-green eyes), another thought it was a Harpoon Clubtail as the dorsal thoracic stripes don’t look thick enough for Beaverpond and the lack of a yellow spot on S8 points to Harpoon. And while the clubtail isn’t fully mature, this person thought the eyes were gray-green and that there might be some pale coloring on the hind femur. As such, this one will have to be left as a Gomphus species, or Harpoon/Beaverpond Clubtail for now.

I spotted another dragonfly on the ground, this one a member of the skimmer family. The white face and the red spots extending to the seventh segment of the abdomen identify this one as a Hudsonian Whiteface. 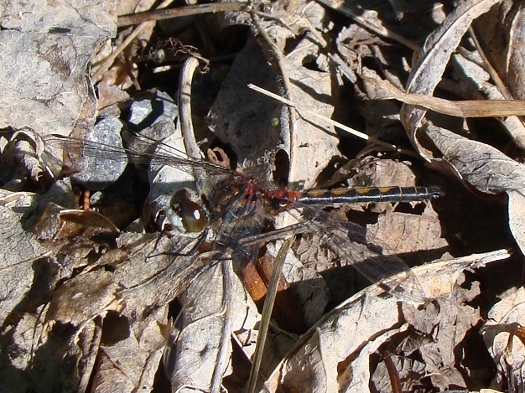 Then someone called my attention to a dragonfly that had landed on someone’s shirt! As suspected, it was a Harlequin Darner, my second of the year and only the third one I’ve ever seen (and all on people!). These darners can be identified by a single orange spot at the beginning of each abdominal segment followed by a pair of spots that are green in males and white in females. They also have a mottled green thorax, and mature males have green eyes. 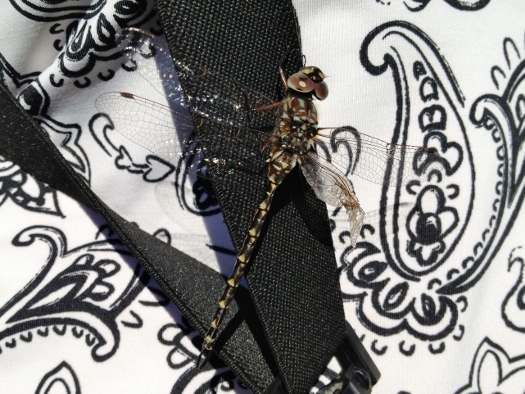 We also saw two baskettails patrolling the area. They flew close enough to get a good look at their wings, and they didn’t have the large dark hindwing patches typical of a Common Baskettail. It was at that time I made a horrible discovery: I had forgotten to take my camera’s memory card out of the computer and put it back into the camera! My camera’s internal memory had enough space for about 15 photos before it ran out, so I was reduced to using my cell phone camera for the rest of the trip.

We stopped at the Dunlop picnic area next but didn’t find any new birds for our list. A small, rushing stream ran behind the area and I caught a glimpse of a jeweling damselfly fluttering away as well as a Racket-tailed Emerald. I would have liked to have spent more time exploring the stream as some interesting odonates that aren’t typically found in beaver ponds can be found along fast-moving streams. 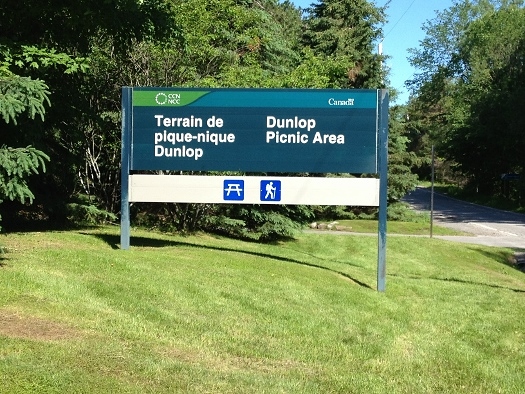 From there we drove over to a couple of lookouts along the Champlain Parkway. Someone found a Juvenal’s Duskywing in the vegetation at the Huron Lookout where a Mourning Warbler had been found during last year’s outing to Gatineau Park. We heard an Ovenbird, a Red-eyed Vireo, and a Broad-winged Hawk in the area although we saw none of them. A little higher up at the Etienne-Brule Lookout we saw a beautiful Black-throated Green Warbler singing in the top of a tree and found several Common Whitetails and Chalk-fronted Corporals, a couple of immature whitefaces and a Hobomok Skipper. 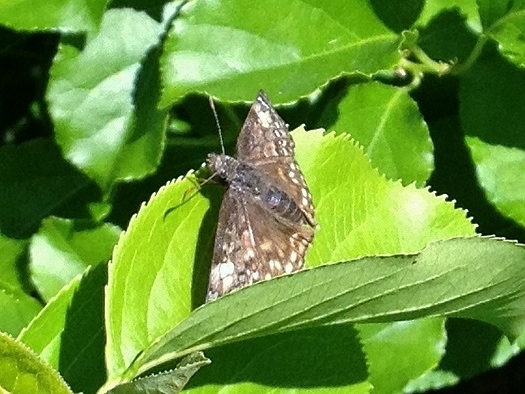 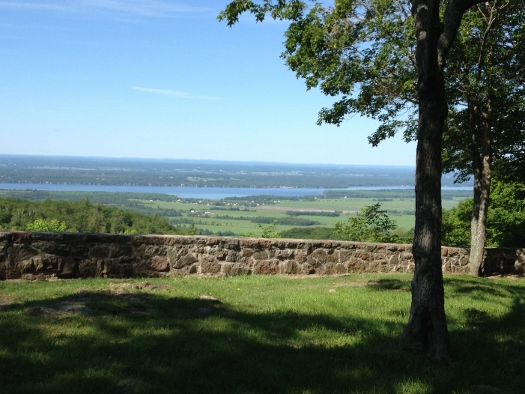 On Top of the Escarpment

Our last stop was the top of the escarpment where Justin led us along a trail through the woods. I saw a couple of Common Baskettails flying above the parking area, including one that perched on a leaf high above our heads. We heard more birds than we saw, including a drumming Ruffed Grouse which Justin thought was odd given the lateness of the season and the density of the woods; these birds usually prefer more open woods. We also heard an Eastern Wood-Pewee, a Winter Wren, several Red-eyed Vireos, a couple of Veeries, the magical song of a Wood Thrush, several Ovenbirds, two Black-and-white Warblers, a couple of American Redstarts, one Common Yellowthroat, a couple of Black-throated Green Warblers, and a White-throated Sparrow. In an adjacent field we heard the song of a Mourning Warbler, and though a couple of us looked for the singer we couldn’t find him. I have only ever seen one, on the Bruce Peninsula, so this was a treat. On the wide road leaving back to the parking lot we actually saw two of the best birds on our walk, a beautiful male Rose-breasted Grosbeak and an equally beautiful male Scarlet Tanager.

Justin stopped to point out a Yellow-bellied Sapsucker nest when he heard the young calling from within the trunk of the tree; as we watched the parent delivering food to its young he told us how the height of the nest and the shape of the cavity within the trunk prevented most predators from being able to get to the sapsucker hatchlings. As such, they can cry as loud as they like without endangering themselves. The one exception is bears – they can climb tall trees, and if the wood is old enough or weak enough, they can tear right through the wood to get to the babies within.

We didn’t see all that many butterflies other than a couple of Little Wood Satyrs in the woods and a Mustard White and a Northern Crescent along the road. We saw plenty of dragonflies, including this gorgeous Arrowhead Spiketail – a very uncommon critter in Ottawa, and only the second one I’ve ever seen. An Elegant Spreadwing was close by, and it was then that I wished I had a real camera! 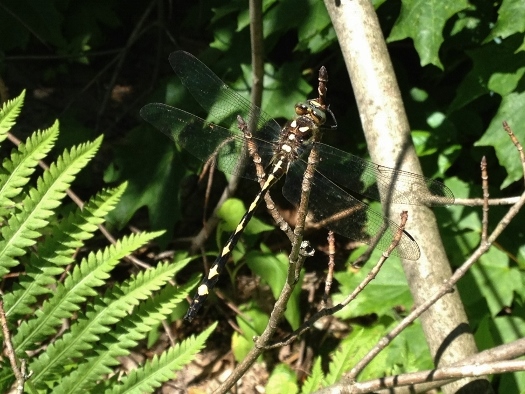 The outing ended at noon. Gatineau Park is beautiful this time of year, and I had a terrific time. Though I didn’t get my target species – Black-billed Cuckoo – it was great hearing the Winter Wren and the Mourning Warbler and to see the Virginia Rail flying across the pond. I saw some neat odonates too, such as the Arrowhead Spiketail, the Harlequin Darner and the Beaverpond/Harpoon Clubtail. Here is the list of species that I saw (others may have slightly different lists; I think the total bird list is actually 59):

3 thoughts on “Birding in Gatineau Park”