January, as usual, is turning out to be a wretched month for birding. First we had rain and foggy, mild temperatures two weekends ago; then last weekend we got more snow, including sudden squalls that resulted in white-out conditions; and now a cold Arctic air mass has settled over Ontario, causing the jet stream to sag to the far south (in this case, Alabama!) and temperatures to fluctuate between to -20°C during the day and -30°C at night. As a result, I’ve only been able to add two birds to my winter list and four birds to my year list since the first weekend of January.

I managed to visit Hurdman two weeks ago, but once again the Barrow’s Goldeneye was absent. So, too, were the Bohemian Waxwings. There were fewer Common Goldeneyes present on the Rideau River than there had been a month ago, but two muskrats sitting on the ice near the open water was a nice surprise – I have never seen more than one here before.

Two feeders along the feeder path were well-stocked, and a couple of American Goldfinches had taken over the nyjer seed feeder. Further along the trail I saw a large number of Common Redpolls at the sunflower seed feeder. A few were feasting on the seeds on the ground, while others were twittering away in the treetops. There were about two dozen altogether.

Although I searched the flock, I only found one bird which seemed paler than the others….but not pale enough to be a Hoary Redpoll, which I still haven’t seen this winter. 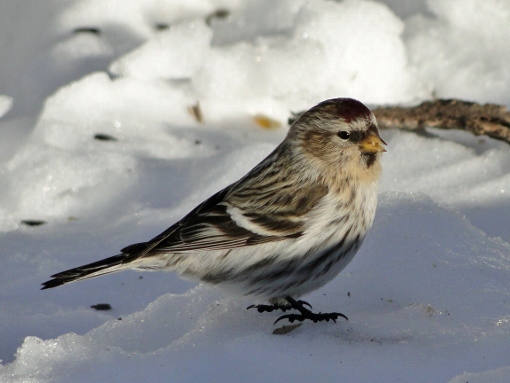 I visited a couple of trails in Stony Swamp the following weekend, looking to add some woodland birds to my year list. My target species were Pileated Woodpecker, Brown Creeper and Ruffed Grouse; and, since it was an overcast day, perhaps maybe an owl, which I only seem to see on cloudy days. The weather was a balmy +5°C, perfect for spending a couple of hours in the woods. While I had no luck with the Pileated Woodpecker, or the Brown Creeper, or the Ruffed Grouse, I was happily surprised when I did find a Barred Owl! Once again it was the crows that led me to him, giving their harsh alarm calls although no crows were mobbing the owl when I arrived. I guessed that they had chased the owl from its initial perch into this stand of trees and lost him. 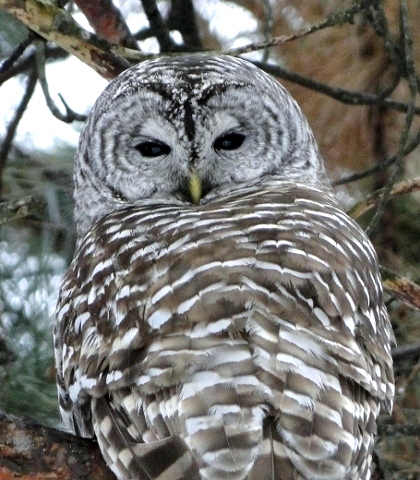 During my woodland exploration I heard a Pine Grosbeak calling from somewhere close by, and saw a Common Redpoll, two porcupines and one White-tailed Deer, a beautiful buck still carrying his antlers. 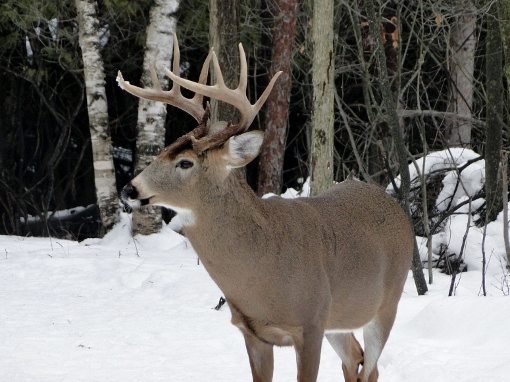 The snow last weekend put a damper on my plans. I went out as soon as it stopped on Saturday, but the trail parking lots near my house were full so I skipped my walk in the woods. I drove out to Dunrobin instead, although the only wildlife of interest were two beavers resting on the icy stream along March Valley Road. It seemed kind of an odd place to see them as the creek is fairly small. A stop by the Trail Road dump on my way home produced two Red-tailed Hawks and three gulls flying over; they were likely Herring Gulls, but I didn’t get a good enough look at them to be sure. A Northern Shrike in the same area was a year bird for me.

I returned to the dump the following day in between snow flurries and discovered a large group of blackbirds feeding on seed scattered on the ground beyond one of the gates. Two cardinals, one Blue Jay, an American Tree Sparrow, several juncos, lots of starlings and two Brown-headed Cowbirds (male and female) were taking advantage of the food. I was surprised to see the cowbirds as they usually spend the winter further south, but every now and then one (or more) will turn up at a feeder and stay the winter.

I left the feeding area (or would that be the seedy area?) and drove toward the dump itself. I hadn’t driven very far when a white curtain of snow suddenly descended on my car; visibility shrank until I could only see a few metres around me. Giving up on the idea of getting any more birding in that day, I slowly drove home through the white-out. I had never seen or driven in anything so bad, and only the knowledge that I knew the roads gave me the confidence to get myself home.

That day the temperature began to fall as a ridge of high pressure settled over eastern Canada. The daytime high hasn’t climbed above -17°C all week. It’s been too cold to go out at lunch, but I did get a new year bird on Tuesday when I spotted our neighbourhood Merlin sitting on a streetlight while walking to catch my bus in the morning. I only see him once every three or four months, so it was good to see that he’s still around. According to Bob Cermak, our local compiler, Merlins have been scarce in Ottawa this winter.

Hopefully the weather will improve over the weekend as promised. While the sunshine has been nice, it has been much too cold to spend much time outdoors. I can’t wait until spring when we can enjoy days that are both sunny AND warm!

13 thoughts on “The January Birding Blues”