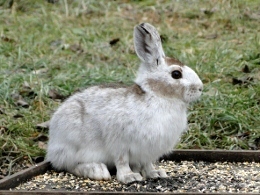 It’s that time of year again! The official winter listing period began on December 1st, and once again I am keeping a list of all of the birds I find in the Ottawa area during the months of December, January and February. While a winter list of 90 species or more in the Ottawa study area (a 50 kilometre radius centered on the Peace Tower downtown) is considered excellent, during the past five years I have only averaged 60 species per winter. My best season was last winter, when I tallied 70 species altogether!

The first two weeks of December typically bring the greatest variety of species, as many migratory birds may linger if temperatures remain mild, the lakes and rivers remain ice-free, and food supplies are abundant. Such birds may include Great Blue Herons, White-throated, Song and Fox Sparrows, Green-winged Teals, Ring-necked Ducks, Ruddy Ducks, scoters, loons, Red-winged Blackbirds, Common Grackles, etc. By the time the frigid temperatures of January set in and snowfall accumulates, however, any lingering migrants disappear and it becomes more and more difficult to add new species to the Winter List. It helps, too, if it is an invasion year; we have seen large numbers of Boreal finches and Bohemian Waxwings in the Ottawa region this past fall, so hopefully many of them stick around for the winter. It is too early to tell whether this will be an exceptional winter for seeing owls.

Only four days into December, my Winter List is up to 33 species. It was gray and cold (-8°C) on Saturday, so I bundled up and went to Mud Lake. Because the temperature has been below zero all week the pond was mostly frozen. An early freeze-up is detrimental to building a large winter list, as this means that most dabbling ducks (except Mallards and American Black Ducks) and Great Blue Herons have already flown south. I found plenty of Canada Geese, Mallards and American Black Ducks at Mud Lake, and to my surprise I did see one other dabbling duck – a lone female Wood Duck running across the lawn just east of the ridge toward the river. I was in my car at the time, driving to Britannia Point, and by the time I parked the car and made it over to the water she had vanished. There were lots of mallards and geese swimming close to the shore, so she might have simply been hidden among them; while searching I found this interesting individual which appears to be some sort of domestic goose hybrid. 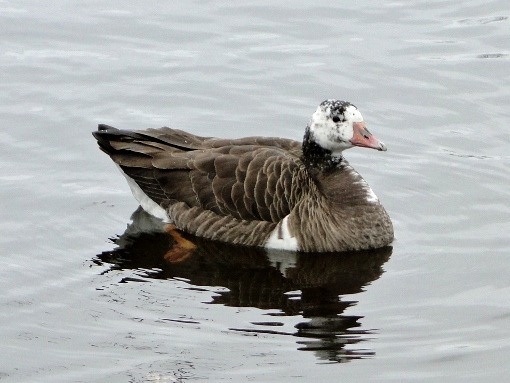 I also found a few House Finches and Dark-eyed Juncos near the feeders on Cassels Street and two female Red-breasted Mergansers at Britannia Point – a new species for my Mud Lake list! Elsewhere that day I had a flock of about a dozen Pine Grosbeaks, two different flocks of Common Redpolls, and a Red-tailed Hawk.

Sunday was mild and rainy, but I managed to get in a 30-minute walk at Sarsaparilla Trail while waiting for the stores to open. I added Red-breasted Nuthatch (two males and a female) and Blue Jay to my Winter List and that was it. I completely forgot about trying to entice the Blue Jay to feed from my hand when he landed in a tree close to me, and I tossed him some peanuts.

I was off work yesterday, and the weather was mild and overcast. I spent some time at the Fletcher Wildlife Garden, the Arboretum and Dow’s Lake and added Bohemian Waxwing, Hooded Merganser and Great Black-backed Gull to my list. From there it was off to the west end where I spent some time at the Hilda Road feeders. The only new bird there was American Tree Sparrow, but I was delighted to find a Snowshoe Hare beneath the feeders! I had gotten out of the car to check the shrubs for other birds, and when I turned around I saw a large white mammal sitting on top of one of the small wooden tables. Of course I had left my camera in the car, and when I went back for it the Snowshoe Hare turned around and bounded into the thickets. 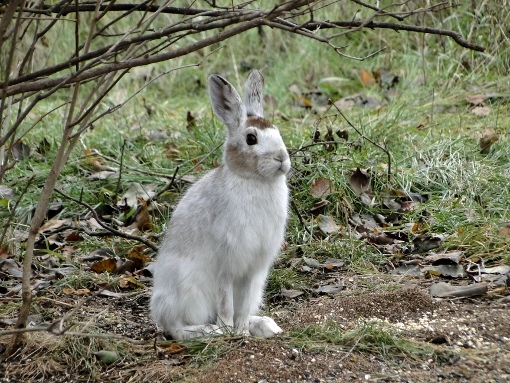 I could still see him sitting beneath the shrubs, so I got back into my car and waited. About ten minutes later he came back out and approached the feeder area. He then hopped up onto one of the smaller tables and began munching on the bird seed! 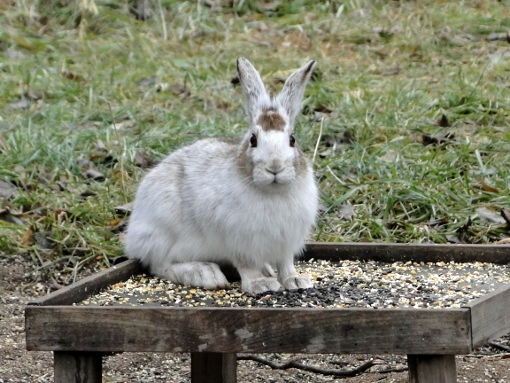 As all the snow from last week has melted, his white pelage really stood out against the green and brown background. It takes about ten weeks for the coat of a Snowshoe Hare to completely change color from summer brown to winter white, and given the amount of brown remaining on this fellow’s face and back, I estimate it will take another two weeks or so until he is entirely white. Hopefully by that time there will be enough snow on the ground to help camouflage him against predators. 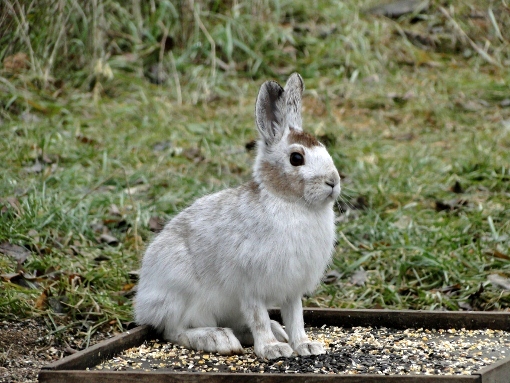 The Snowshoe Hare is one of my favourite mammals, though I don’t encounter them as often as I would like. Seeing one at Shirley’s Bay yesterday was definitely the highlight of my weekend!