It’s been a long, difficult week for a variety of reasons, many of them personal. As I had spent the previous weekend attending my brother’s wedding in Cambridge, Ontario, I didn’t have a chance to go out and enjoy nature; and the last week was so gray and rainy that when I finally had the chance to get out at lunch one warm, sunny late autumn day I decided I couldn’t pass it up. So it was off to Hurdman, where I was hoping to see some butterflies, caterpillars, and mid-autumn migrants. I found a couple of Yellow-rumped Warblers and White-throated Sparrows, but that was it in the migrant department.

Fortunately, the warm day (it was 18°C) meant that there were were plenty of insects around. Almost as soon as I left the bike path to take my usual route through the woods I noticed a small dark butterfly fluttering just above the ground. Although the underside was faded, once she landed I noticed the characteristic coppery brown colour and orange spots of an Eastern Tailed Blue. She appeared to be laying eggs, or ovipositing, as she was tapping the tip of her abdomen to the grass blade on which she rested.

This was much later in the season than I was used to seeing these butterflies, so I checked the date range on the Butterflies of Canada website. Although the web site states that this species has a date range between May and October and two or three generations per season, I wasn’t sure if this was accurate for Ottawa. I then consulted the butterfly group I correspond with, and was told that the latest date the Eastern Tailed Blue has been recorded is October 8, back in 2008 (one of the two rainy summers we had). One member of the butterfly group hypothesizes that there are as many as five generations of Eastern Tailed Blues in the Ottawa region!

The only other butterflies that I saw were two Clouded Sulphurs that were too far off to photograph. I kept hoping to find some Eastern Commas, Question Marks, Mourning Cloaks or Compton Tortoiseshells – all nymphalid species which spend the winter in the adult stage – but had no luck.

A little further along the path I came across an isolated group of asters with a number of small insects circling above them. There were some honey bees and a couple of metallic green sweat bees (one group that I haven’t been able to photograph at all this season) as well as a couple of hover flies! The first hover fly that I noticed was a species I hadn’t seen before.

In the same area I came across a second hover fly, this one much smaller. This was a species I had seen before last fall, although I didn’t get very many decent photos of it. The photos of this individual on the aster turned out much better. Because they are so tiny, it’s difficult to get close enough to them for a macro photo without blocking out the sunlight.

I saw a third species land on a leaf close by, and stopped to photograph it. It flew off before I could get close enough for a macro shot. This was taken from about six feet away.

After watching these hover fly species for several minutes, I began to seek out other groups of asters. In fact, I spent most of my lunch break examining the asters for insect life. My efforts were rewarded as I came across an unusual hover fly which looked more like a bee than a fly. There were several honey bees gathering nectar from the same group of asters, and in fact I thought it was a type of bee. When I saw the shape of the eyes and the bright, shiny gold thorax I began to suspect that it was merely a bee mimic, and ventured closer for some macro photos.

All the other hover flies I have ever seen have mostly yellow abdomens with black bands. These fellows, however, were mostly black with thin yellow bands across the abdomen. I saw three individuals in this particular area and suspect there were many more.

This patch of flowers was right next to the trail leading to the river. The vegetation had been heavily cut back, making it easier to get to the water; along the way I saw another hover fly sitting on a leaf in a sunny spot. 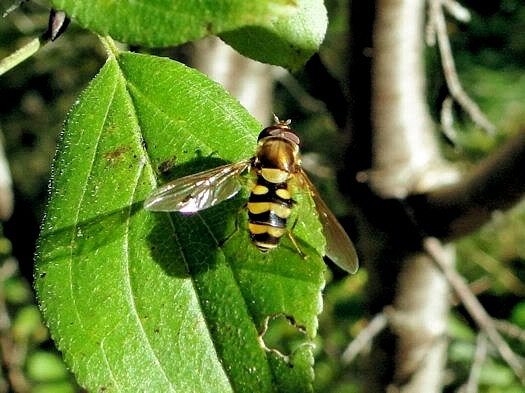 There were no birds of interest on the water, so it was time to bring my outing to an end. I was surprised by the number of hover flies around, both in terms of the number of species and the number of individuals that I saw. I hadn’t realized that early October is the best time to see these beautiful little bee mimics and will definitely be keeping an eye out for them the next time I go out for a walk!